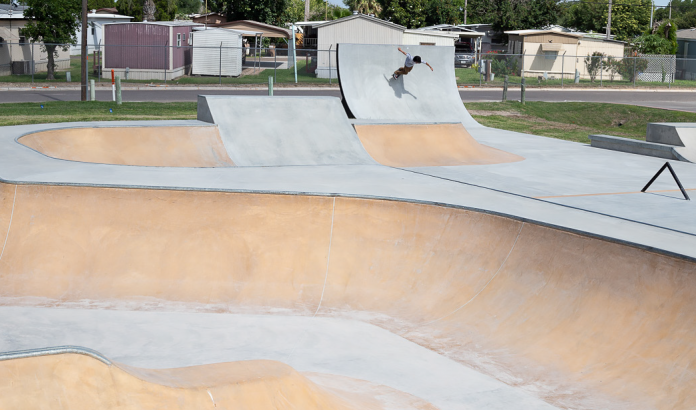 Shredding in the Burg

But even before the city gave the green light, skateboarders, inline skaters and roller skaters were putting wheels to the pavement to enjoy what is officially the largest skatepark in the Rio Grande Valley.

According to the City of Edinburg website, the park sits at a whopping 12,000-plus square feet, and the design incorporates sections for beginner, intermediate and advanced skaters.

Robby De Leon, 27, is a native of Edinburg. He’s been on his board since he was 13-years-old, making plenty of friends along the way. He was a part of a local skate crew known as Majer that made videos documenting their fun and adventures. The channel racked up millions of views and helped put RGV skating on the map.

“Even the one on Sprague [SkatePark at Bicentennial Park], I was there when it opened,” De Leon said. “This new park is a huge step up compared to the older one. This one is all concrete, so it doesn’t rust out or wear down like the other parks do.”

He believes that as skating goes stronger into the limelight and public eye, it’s good to see the growth worldwide trickle down to our local community.

“Skating was in the Olympics and it’s definitely bringing in a lot more. We don’t really have shops or events down here, so hopefully this park can help do that for the Valley.” 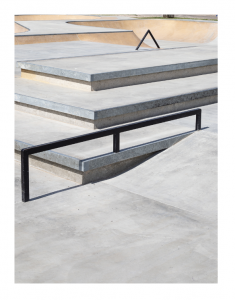 Officials with Edinburg’s Parks and Recreation Department said they went to their first skate park with a pen and paper to take notes and listen to the needs and wants when planning for the new spot.

“We talk about serving our community and taking care of our residents, and this is one way to do it — quality of life,” said Edinburg Mayor Ramiro Garza Jr. during the ribbon-cutting event. “We’re a growing community and we need amenities like this.”

Something special about the park at South Park is the ability for skaters of all skill levels and experience to give skating a go.

Ashley Almaraz, 33, of San Juan has gotten back into skating recently.

“I picked up roller skating in August 2020 just to skate around,” she said. “When I was a kid I had rollerblades, but during the pandemic I wanted to pick up a new hobby; I was bored.

“I learned to skate in my driveway by watching a lot of videos and stuff. About six months into it, I thought I don’t feel like this jam skating (pretty much dance moves on roller skates) is working for me. I want to go to the skate park.” 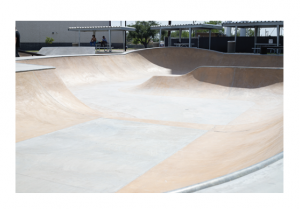 The rest is history and Almaraz now spends many of her mornings at the park learning new tricks and getting more comfortable as part of the skating scene.

“It’s just different compared to the parks around here,” she said. “It’s something we really don’t have down here. I like that they have different sections.

Despite only having a few years under her belt, Almaraz is already paying it forward and helping other skaters.

“I was there a couple weeks ago and a younger girl was skating around, and she came up to me and asked if I could teach her how to drop in,” Almaraz said. “I’m still learning myself, but I tried my best to help her out.

“When I first started, I wanted to be alone because I didn’t want to fall in front of people. But then you start meeting the people there at the same time every day and make friends. I prefer skating with people now. It’s boring when you’re alone.”