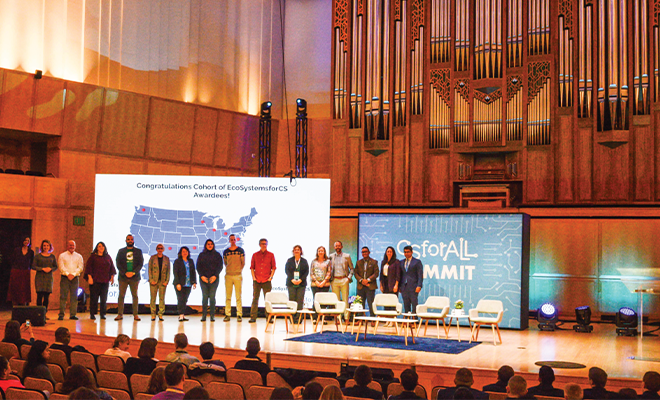 Great things are happening at Mission CISD when it comes to computer science and coding, including converting an elementary school to be an engineering and technology-ready school. Many of these efforts are enabled through partnerships with the City of Mission and Mission Economic Development Corporation.

“There’s a great emphasis on the technology integration in the classroom,” said Lolly Peña, district coordinator for instructional technology and library media at Mission CISD. “We’re very excited. We have a lot of support from the EDC.”

Peña oversees the district’s 22 libraries — plus robotics and coding initiatives. In November 2019, when national computer science education organization CSforAll named the Rio Grande Valley as one of the 10 communities in its EcoSystemforCS cohort, Peña recognized that this would continue to mean good things for both Mission CISD and other districts in the region.

“It’s a great honor because we, in partnering with the Mission EDC, were able to offer instructional technology that focuses on Scratch coding, for example, as well as promoting coding within the community,” she said. “Our teachers have an opportunity to be exposed to professional development and training that provides them the opportunity to learn how to integrate coding within the curriculum.”

The Mission EDC has spearheaded the EcoSystemforCS initiative, applying for and winning the $15,000 grant — which the EDC will match. Working with partner Youth Code Jam, Mission EDC looks to host a Low-Sensory Code Jam for neurodiverse students and their families, and distribute 10 bilingual “Jam in a Box” kits to Title 1 schools with the funding from CSforAll.

“For CSforALL to have picked the Rio Grande Valley out of 74 applications is a huge accomplishment because it recognizes all of our previous efforts in bringing equitable access to computer science as well as noticing that there’s a big future ahead of us,” said Cristina Garza, director of social impact for Mission EDC. “We have a lot of potential in this area.”

“This is not the end-all, be-all solution to computer science in the Rio Grande Valley,” Garza said of the EcoSystemforCS designation. “Rather, this is the beginning of figuring out how to create programming that’s more inclusive for the whole region.”

The 10 communities named into the EcoSystemforCS cohort will meet on a quarterly basis and serve as peer mentors to one another.

“The other grantees are working on incredibly exciting projects,” Garza said. “It is a great opportunity for us to see how cities are solving similar CS-related problems — what kind of policies they put into place to make those solutions happen. That’s a great resource.”

She adds that she aims to expand computer science and coding access and funding efforts across the region in the future.

“At the end of this grant cycle, we want to establish a way to create a partnership or a committee with other partners in the Rio Grande Valley to move forward with regional approaches to grants and initiatives,” Garza said. “We want other cities to buy into this regional approach and to be our partners as we grow awareness for computer science and seek more funding.”

Garza points out that the future’s most in-demand jobs haven’t been created yet, posing a unique challenge in preparing today’s students.

“Making sure that kids have complete access to computer science education is a crucial part of it, but beyond that, we need to talk about computer science past workforce development,” she said. “It allows for creativity. It teaches kids to fail. It builds their confidence by allowing them to build projects. It expands their curiosity. It builds resilience. It allows them to discover new things about the world that they didn’t know.”

These skills lend themselves to not only future careers in tech, but future well-rounded workers in a diverse range of industries and fields.

Mission CISD will continue to use its computer science-centric partnership with Mission EDC to prepare students for that future.

“We take pride in promoting that we teach four languages,” Peña said. “We teach English. We teach Spanish. We teach French. And coding.

“We are very fortunate to have partnered with the Mission EDC and in doing so, we’re able to promote computer science and programming and coding to our students.”

Learn more about the Mission EDC by visiting MissionEDC.com.

What computer science education initiatives would you like to see in your city? #JoinTheConversation at facebook.com/rgvisionmagazine.