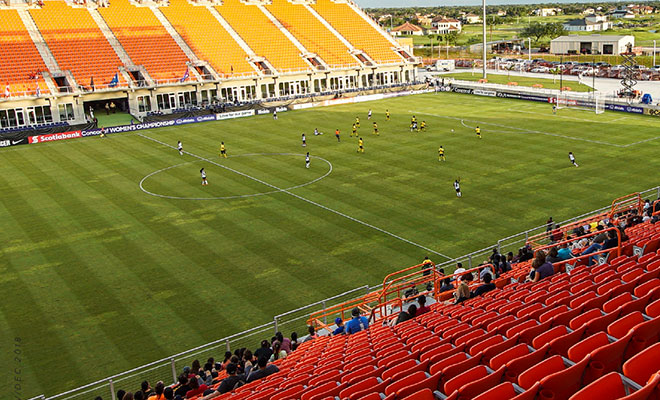 Ana Tyx scrunched down in an orange plastic seat, hiding behind her mother as the Canadian and Cuban national women’s soccer teams warmed up on the field below.

Laura Nikstad took over the interview questions for her daughter after Ana quietly confirmed they were soccer fans.

“Are you a soccer player?” Nikstad asked.

Nikstad pointed at herself as Ana smiled shyly.

Nikstad, her husband, and daughter live in McAllen, where 6-year-old Ana plays U-7 soccer on a McAllen Youth Soccer Association team called the Unicorns, Ana said. She netted two goals in a recent game while playing wing.

And the team’s jerseys?

Mother and daughter represented just two out of a couple thousand soccer fans who turned out for the six games. Oct. 5’s doubleheader saw a total attendance of 1,379 people. The Oct. 8 games tallied an attendance of 414, and Oct. 11’s event counted 289 fans in the stands.

“It’s really, really exciting,” said Rene Borrego, CEO of Sports at H-E-B Park. “I hope people realize the magnitude of an event like this. These are world-class athletes here in a very important tournament.” 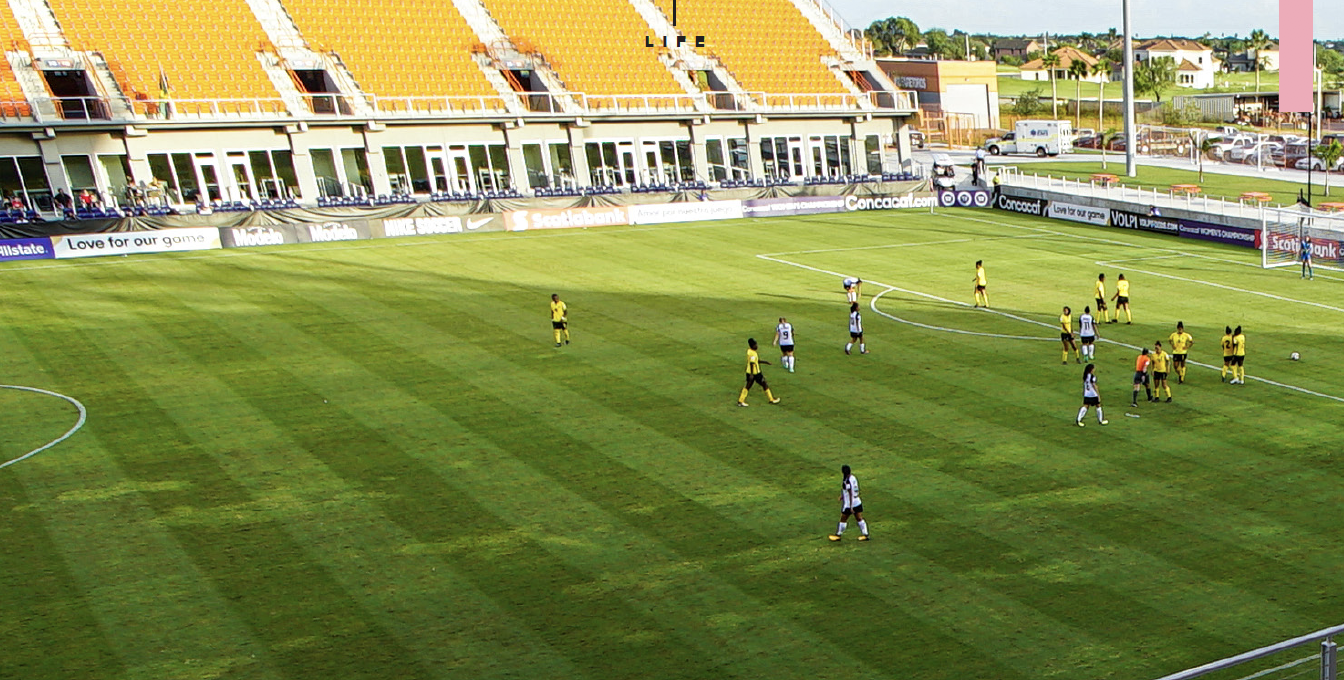 During the first doubleheader Oct. 5 at H-E-B Park, Costa Rica thumped Cuba 8-0, while Canada overpowered Jamaica 2-0. The next competitions, Oct. 8, recorded Jamaica edging out Costa Rica 1-0 and Canada trouncing Cuba 12-0. The final day of play in Edinburg, Oct. 8, saw Jamaica dominating Cuba 9-0 and Canada easing past Costa Rica 3-1. Canada and Jamaica went on to compete in the semifinals held Oct. 14 in Frisco, Texas. Canada beat Panama 7-0 for a chance in the finals against the United States, which beat Jamaica 6-0. On Oct. 17 in Frisco, the United States held off Canada 2-0, while Jamaica beat Panama in penalties. First, second, and third place qualified for the World Cup: the United States, Canada, and Jamaica, respectively.

While both Borrego and Marc A. Solis, president of H-E-B Park and Bert Ogden Arena, said they wished the U.S. or Mexican women’s teams could have played in Edinburg, the teams that did compete in the Rio Grande Valley worked hard to win their places.

“You’re talking high-level, high-caliber soccer, the most elite women in the world playing here,” Solis said. “You see a lot of little girls high-fiving the players as they go by. I think it’s just kind of a great way to enhance the sport, continue to show little girls that this is possible. And you can see by the quality of the play — this is just amazing, so, I’m thrilled.”

Rodolfo and Caridad Hernandez’s 7-year-old twin girls have played soccer for about six months, starting out with RGV FC Academy and moving on to MYSA — they scored a goal apiece in a recent game. The family comes to see the RGV Toros play at H-E-B Park, but they wanted to make sure to catch one of the CONCACAF doubleheaders.

Plus they were excited for the level of play they witnessed Oct. 8.

“We love it,” Rodolfo said. “We love the idea. We’ve been wanting some kind of either professional or semi-professional soccer here in the Valley and we finally have it. The venue’s real nice and now that they’re actually bringing professional teams like these, we’re going to come out and we’re going to support.”

“It’s our first time to come to a soccer game — a CONCACAF,” said Larry, an Army combat medic who recently returned from Afghanistan. “Because usually the closest you can get is like Houston, Dallas, or San Antonio. At least one time it’s here in the Valley, so it’s like, whoa, OK!”

The Flores family usually enjoys watching Germany’s Bundesliga professional soccer, but they picked a favorite for the CONCACAF tournament.

“I think we should go with Canada,” Michael said. Max agreed with his brother, pointing out that the half-time score was 1-0 over Jamaica.

H-E-B Park was built to host teams and events just like this tournament, Borrego said.

“It shows you the caliber of the facilities we have, it shows you the reputation we have in our host community, and this is a great opportunity for the Valley to show we have what it takes to host this type of event,” he said. “We did it the right way — it didn’t take very long before we were in all types of conversations. One publication even ranked us as the number one minor league stadium in the country. We’re getting high praise from lots of different sources, and it wasn’t going to take long before we got the attention of an organization like this.”

Borrego said he hopes the success of the CONCACAF tournament opens the door to future chances for big events.

“It’s a really great opportunity for us, so we should take advantage of this and show people that hey, this is the place to come if you really want to have a great event,” Borrego said. “I think you’re going to see a lot more professional teams throughout the region coming here to train because of the facilities we have.”

For now, the event brought more visibility to the Rio Grande Valley.

Yvette, mother of Jamaican defender Dominique Bond-flasza, donned a distinctive yellow, green, and black jersey Oct. 5 to cheer on the team. She came from California to watch the tournament, and admired H-E-B Park.

“It’s beautiful — this is a new facility, right? It’s gorgeous,” she said.

She travels often to see her daughter play, and this was her first time in the Rio Grande Valley.

A brisk breeze blew through the stands Oct. 8, the air cooling as sunset approached.

Nikstad — mother and soccer coach — brightened as she talked about recently watching the U.S. women’s national team play and the memories of icon Mia Hamm.

“It’s like, I’m here with my daughter for educational purposes, but —”

She punctuated her words with a raucous cheer.

“It’s just amazing,” she continued, looking out across the field, the top female soccer players in the world stretching and running drills. “We’re really excited to be here together, watching soccer.”

Pressed up against her mother, Ana yawned.