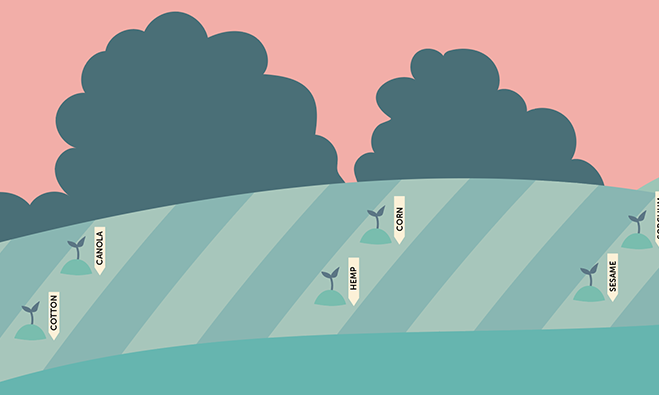 For more than a century, the fertile fields of the Rio Grande Valley have produced row crops like cotton, grain sorghum, and corn; citrus fruit; sugarcane; and winter vegetables. But anyone who knows anything about the business of agriculture knows it’s not an easy livelihood, and one fraught with risk-taking.

South Texas growers face swings in markets and fight battles against droughts, floods, and pests. Climate change and what effect it may have on Valley agriculture is a looming question mark. Urban development has chipped away at available farm acreage.

Yet agriculture remains an economic powerhouse. Texas A&M Agrilife Extension District 12, which encompasses the Valley, estimates crops and livestock combined were valued in the neighborhood of $731 million in 2017, according to Samuel Zapata, assistant professor and extension specialist for agriculture economics.

“That value is just the value of production, the direct impact,” Zapata said. “Then you have the multipliers, where for each dollar, you generate $1.90 to the regional economy. That will give you the impact of supporting businesses and jobs.” That math brings the total annual economic impact to almost $1.4 billion.

Change is a constant for most farmers. Decisions on what crop and how many acres to plant can depend on an ever-changing economic dynamic of supply and demand. More unpredictable factors involving weather and availability of water further complicate the equation.

“You have got to have somebody you can sell it to,” said Brownsville area farmer Paul Loop, who grows primarily cotton and corn. “You have got to be realistic with what you are growing and where it’s going. We try to have our crops sold before we even plant them, but there’s a lot of things that affect the market.”

“Agriculture is a very risky enterprise,” Zapata said. “I try to provide information and help growers apply economic principles. You have production risks, the incidence of pests and marketing involved. You really don’t know what the price will be.”

This year the Valley cotton harvest has been pretty good, Zapata said, but prices are down due in part to tariffs levied on cotton destined for China. “The new tariffs have been tough for us,” he said. “China used to be the main buyer and they are not buying from us now.”

Hidalgo County Agriculture Extension Agent Vidal Saenz said some South Texas farmers are turning more to nontraditional crops like sesame seeds, canola, and oilseed sunflowers in dryland fields where there is no irrigation.

“In agriculture the farmers are planting other crops like sesame,” Saenz said. “That’s more of a drought-tolerant crop. It can withstand a drought and it rebounds when it does rain.”

“The Valley is ideal for hemp production,” Saenz said. “You can do a lot with it. Fibers, feed for livestock, but the money-maker is going to be in the CBD oil extraction, especially on a smaller scale. Large scale would be for fiber.”

Scientific advances also have helped farmers in ways that contribute to harvests with genetically modified crops and modern pest management, both of which can boost crop production. Some GMO crops like cotton and sorghum are resistant to insecticides, so fields can be sprayed to kill weeds without damaging the crop, Saenz said.

Crop selection, including genetically modified strains, can mean a reduction in the use of pesticides. “It’s not just about spraying a chemical,” Sekula said. “It’s about what natural predators are present and what chemical we are going to use. We don’t want to take out pest predators.”

Sekula constantly monitors and traps bugs to identify not only current threats, but also for signs of new pests migrating into the South Texas area. She said new pests come into the United States from Mexico from time to time, and threats appearing in Florida can reach the Valley in three to five years.

GMO crops have made a significant impact on how growers deal with pests attacking their fields. “I think it’s excellent,” Sekula said. “When you have GMOs, it reduces the amount of spray applications you have to make. The plant is resistant to the pests or the pests feed and then die off.  And when you think from a farming perspective, the less pesticide, the better.”

No matter the advances, the next threat or challenge always seems just around the corner.

“For this next year, my main concern is cotton,” Sekula said. “There’s a disease called cotton blue. It’s a virus. It’s transmitted by cotton aphids. They have found it in a couple of other states and it has been found in College Station. We haven’t seen it here yet, but it’s really on my radar for this next season.”

Loop comes from a multigenerational farming family, and he is well aware of the ups and downs he faces. This past cotton-growing season he had to replant some of his fields after too many cold nights harmed the young plants. Then prices were lower than expected. Scattered rains in August and September slowed the harvest and yields were reduced.

“There’s always something,” he said. “It’s just constant change. The weather down here is very variable. We also have these little showers than can wreak havoc on the harvest. Unfortunately, this year the rain was where we were harvesting.”

But Loop will continue his life as a farmer, and with an eye toward the future. “I was kind of born into the occupation. My dad and uncle helped us get started. We did pay our own way but they helped us a lot.”

He said each generation of his family has taken care of the land and made improvements, such as upgrades to irrigation systems. “We want to leave things better than they were with improvements on the land we farm. That’s a benefit for the future farmers.”