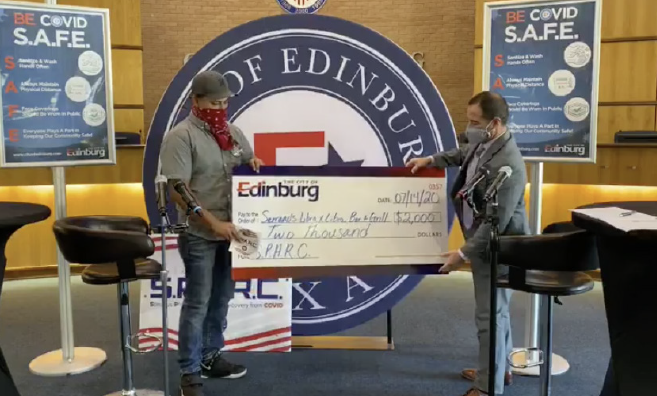 As we all know by now, the coronavirus pandemic has upended many aspects of our everyday lives. And for local business owners, it also brought major shifts in focus.

What may have initially been goals of growth and expansion for their businesses quickly pivoted to simply staying afloat until the spread of the virus subsided or restrictions loosened.

Many small businesses faced closures that lasted weeks or even months, a challenge not only for the owners of those businesses but for the local economy in general.

“Our priority was to make sure that we were providing resources specific to our local residents,” Edinburg City Manager Ron Garza said. “We wanted the assistance provided here to stay here.”

Using federal stimulus funds, the City of Edinburg put together the Stimulus Program Aimed at Recovery from COVID, known as SPARC, to issue about $2 million in economic aid to local businesses and residents.

The first round of funding was issued in early July, starting with small businesses that had been forced to shut down by executive orders, such as restaurants, gyms, and hair salons, Edinburg Assistant City Manager Brian Kelsey said.

“We tried to target those with the most urgent and immediate urge first,” Kelsey said. “That provided some people with immediate relief for things like payrolls, rent, business operations.”

The second part of the program was gift cards for community residents, targeting low-income households. The cards were linked to local businesses only and residents were provided with a list of places where they could spend the funds.

“It was definitely a different concept,” Garza said. “And people did question it a little bit … but we had to keep communicating that it was meant to keep that money within those businesses that suffered the most impact.”

For participating businesses, having the community encouraged to use their gift cards in their shops was a way to also introduce many of them to their services and products. 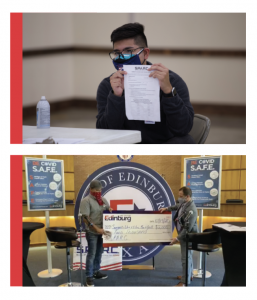 The restaurant Señor Cactus, for example, was one of the few that happened to open in the midst of the pandemic. The business is located in a new development at 403 W. Trenton Road. While there was a delay in opening plans, the investment could only hold off for so long.

“We opened on June 20, practically at the height of the pandemic,” Ricardo Mares, general manager at Señor Cactus, said in Spanish. “We wanted to wait to open a little longer, but at that point, it wasn’t possible. We had to open and open now.”

Part of the focus at the time, Mares said, was to stay on top of messaging from the City of Edinburg to know if more closures were coming or if there was any possibility for help. That’s how they found out about the grant program and quickly completed an online application.

“[The grant] was applied more than anything for payroll expenses,” Mares said. “The initial incoming and outgoing expenses were a bit heavy. And as it is, new businesses don’t generate profit immediately.”

The city collected data on how much restaurants made stemming from the grants and gift cards. The top 10 restaurants — which included Señor Cactus — surpassed the $20,000-to-$30,000 mark in revenue coming from the programs.

What they also noticed was the business sector getting creative with how to engage the public to spend their funds at their location. Things like getting more involved in social media, offering curbside pickup, and even specials for those using the SPARC funds.

“I think it created a sense of urgency for business owners,” said Kelsey. “You would hear more and more of them saying they were now on Facebook when maybe they didn’t really try to leverage social media in the past.”

While the program was a success with some businesses, Kelsey and Garza say they are still aware that about 10 to 15 percent of local businesses remain closed due to the pandemic. The true economic impact may not be fully known until sometime in 2021.

The federal funds had to be spent by the end of the year. And while these are officially gone, the plan now is to use the experience and knowledge to offer capacity-building programs through a partnership with the University of Texas Rio Grande Valley and better prepare business owners for similar hardships.

“We are still facing a digital divide that needs to be closed because not everybody has access to high-speed internet or basic computer literacy,” Kelsey said. “I think it’s important to understand that and try to do what we can to close those gaps.”

How did SPARC help your business during the pandemic and what did you use the funds for? #JoinTheConversation at facebook.com/rgvisionmagazine.