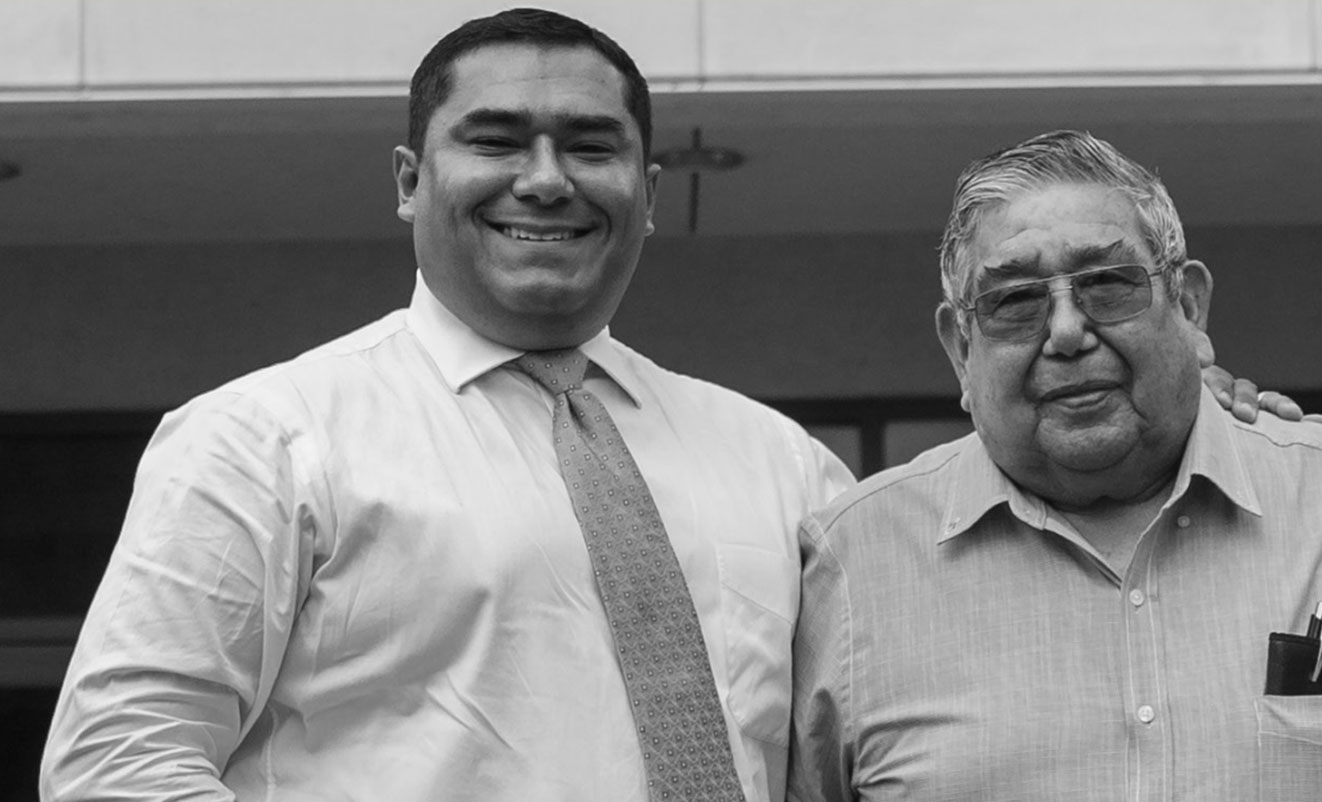 From Migrant Work to the Corporate World

Growing up near onion fields on the outskirts of Rio Grande City, Juan Jose Alejandre Jr. had no way of knowing to what extent his life would change after enrolling in South Texas College. After persevering through an initial failure, his college education would eventually provide the path to a dynamic and ful lling career as a corporate attorney, a drastic change from the farm life his family had known for generations. He would even have a new name — changing it as an adult to Jay Peña to honor the stepfather who raised him.

The oldest of ve children in a migrant family living in a micro-community known as El Refugio, Peña said that at one time he wouldn’t have been surprised to nd himself leading a life like that of his grandfather Antonio and late grandmother Rosaura Gonzalez. “My grandpa is one of the last of ve generations of migrant farm laborers in my family,” Peña said. “With farm labor, college seemed unattainable.”

School was a struggle for him from middle to high school, Peña said. “I was one of those kids who had trouble acclimating. I graduated maybe 20 kids short of last.” Poor study habits entrenched in high school would have more serious consequences in higher education. Nevertheless, he enrolled at what was then South Texas Community College. “I failed every class I took,” Peña said. “I eventually got kicked out with a .04 GPA.” Peña says he can recall taking his STC classes at the Roma High School campus and at the old Fort Ringgold campus in Rio Grande City.

Peña said life became more di cult out of school. When an early marriage ended in divorce, he moved in with friends in Edinburg and took a job as a baili at the Hidalgo County Courthouse, where he worked for a few years. He also enrolled in police academy in Pharr and graduated with a basic reserve o cer’s license but soon felt he was missing something. “I felt like I’d let my mom down. She wanted so badly for me to go to college. My brothers and sisters looked up to me, too.”

He spoke to a counselor at STC, Santa E. Peña (no relation to Jay Peña), who explained that STC could replace his previous Fs with new grades if he retook the classes. “I couldn’t believe it. It was a fresh start. is counselor said, ‘Yes, you can replace all of your classes, but from then on it’s up to you.’ So I gave it a shot.” At his wife Monica’s urging (then his girlfriend), Peña sold his ‘86 Chevy, a pickup he a ectionately named “Cleotilde” after his great grandmother, to buy a bicycle and to help him transition back into college.

“I had to take those college success courses before I could retake all the other classes I failed,” said Peña, who passed the student skill-building courses with no problem. en he enrolled for his rst semester, taking 12 hours. To his amazement, he received all As. He was even more surprised to have made it on the Dean’s List for the rst time, which motivated him so much the following semester that he refused to miss class even after getting hit by a car. “I carried my bike with me to school and rushed to professor Elizabeth Ortega- Hilpert’s class. I had a presentation that day, and she was tough. I got that A.”

Peña pushed through an entire degree plan within one year and made the Dean’s List every semester, leaving STC with a 3.98 GPA. He even quali ed as a nalist for STC’s rst President’s Inspiration Award along with two other students, an honor that came with a $1,000 scholarship. “ at was great money, but that wasn’t the reason I was so happy to be on there,” Peña said. “I had never been recognized before.”

Though Peña didn’t receive the scholarship, he felt his grades were high enough to transfer to the University of Texas at Austin. He left STC just four hours shy of completing his associate degree in business administration and management. Inspired by his STC professor, the late Jay Ramanujam, Peña studied economics and received his bachelor’s degree at UT. Upon graduation, he taught middle school in La Grulla and started a home healthcare agency in Rio Grande City, Angelitos Health Care, with his mother and stepfather.

Peña also completed a master’s degree in business administration at the University of Texas-Pan American. ereafter, he received his Juris Doctor (doctor of law) from Texas Southern University. His younger siblings followed: two graduated from the McCombs School of Business at UT, one from UTPA and another from Texas Tech. One sibling, Isaac Peña, graduates from Cooley Law School in Michigan this fall and another, Erika Peña, started law school recently at Baylor. His parents, Alvaro and Dina, are also thinking of attending STC.

Peña is now an associate attorney at Fong & Associates, LLP in Houston, Texas. He’s served clients across numerous industries and from all over the world, including Mexico, Brazil, France, the UK, the UAE, India, Pakistan, and China. He also serves as general counsel to Ango Global International, Inc. (AGI), a newly structured private investment rm in Sugar Land, Texas. e rm manages over $75 million in private investment and is the exclusive domestic a liate to international energy, industrial, and waste- management companies. AGI recently acquired Ango World Holdings, Inc. (AWHI), a publicly traded investment banking rm where Peña serves as chief legal o cer. AWHI has o ces in Houston, New York, Florida, and Switzerland and is planning for listing and admission to the New York Stock Exchange (NYSE) in mid-to-late 2018.

In retrospect, Peña recognizes that his academic enlightenment began at STC when he decided to dedicate himself to his education. He credits STC with his brothers and sisters’ academic success, too. “It really is so simple. Just get educated, especially if you’re an older sibling. You have to set the bar.” At the same time, he understands that it’s di cult for many people, especially when they’re rst generation college students. “If I have a message to students, it’s to never underestimate the power of determination,” Peña said. “You can turn it on whenever you want. Some of us learn to turn it on when our backs are to the wall.”

Though Peña is honored to serve the corporate and international business communities, he enjoys being home with his wife and children, Annakaren and Baby Jay, in Rio Grande City — close to his roots and not far from the onion elds. Peña is an example for students in the Rio Grande Valley. “As someone who was not a standout student, who didn’t have the college educated family — I made it, and so did my brothers and sisters. e world is a wonderful place. Be determined, and get out there.”