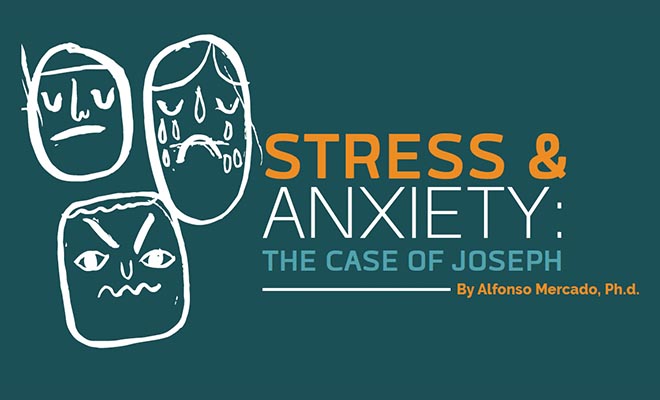 For several weeks, Joseph has lived with an underlying sense of anxiety. Rumors have spread throughout his work that several layoffs are forthcoming in an effort to save the company from financial ruin. As a single father of two girls, such an event could prove to be catastrophic. His daughter, Jessica, is nearing graduation from high school and entering university. Julia, his youngest, attends guitar lessons and has discovered in the instrument a newfound passion. Yet, the rumors prove to be true, claiming Joseph as one of the many unfortunates.
As Joseph drives home from his last day of work, he recalls the weeks preceding his termination and seeks to find a degree of sense and meaning in the adversity. He is unable to find little of anything in the ordeal, only evidence of his own insufficiency. He arrives home to the smiles and greetings of his two loving daughters, but the images of his beloved children, happy and flourishing, only serve to deepen his sense of worry, anxiety, and fear of loss.
Joseph awakens the next morning after only a few hours of sleep. His mind is still troubled, he is tired and concerned, but, he is determined. He updates an old resume, searches for new job opportunities, and submits several applications.
Despite nearly two weeks of continuous searching for new employment, Joseph remains unsuccessful and begins attempting to distract himself from the threat and dangers of prolonged unemployment with alcohol. His drunkenness, however, leads mostly to increasing rumination regarding his feelings of inadequacy and only worsens his sense of depression. In his current state of stress and anxiety, the alcohol also creates an unanticipated heightening of his anxiety when he is sober. Joseph’s nightly inebriation and alcohol-induced changes in behavior are disturbing to his daughters and threaten to strain their relationship.
One evening, Joseph’s daughters, who know their father’s passion for film, ask him to join them at the movies in hopes of distancing him from his use of alcohol. The movie is enthralling for the entire family. For hours, they are completely engaged, as though their own setting, life stories, acquaintances, and intimates were synonymous with those taking place in the picture.
After dropping the girls off at school the next morning, Joseph could not help but reflect on their enjoyment of the previous evening. He thought of his daughters and of his great surprise at their intelligence as they struggled aloud to predict the movie’s conclusion. These recollections of the previous night created a shift in Joseph’s perspective. The opportunity to enjoy more nights like these was right in front of him, created by the very loss he had been deploring. “Rarely, is an experience all good or all bad,” he thought, “toward any experience, multiple, even contrary, perspectives are often possible.”
Once again, Joseph put himself to the task of filing applications. Yet, the phone calls did not come and he began to find himself struggling with new physical symptoms — insomnia, a lack of appetite, and a minor case of occasional tremors. To pacify his body, Joseph dedicated himself to a 15 minute session of breathing and progressive relaxation exercises followed by a 45 minute walk every evening. He finds that the combination of relaxation and walking place him, unexpectedly, in a pleasantly calm and pensive state of mind.

The phone rings and an hour later, Joseph is dressing for an interview.

Tips for the Management of Stress:

Avoid predictably adverse situations
Search for concrete solutions
Distract yourself from negative states of mind by engaging in activities that you find to be intrinsically rewarding
Search for alternative views of the seemingly negative situation, i.e., if a job loss occurs, as in Joseph’s case, spending more time with family, going back to school, or searching for a better job would help abate anxiety.
Engage in routine exercise and relaxation activities

In Joseph’s story, all but the very first of the tips above were employed. He (2) sought concrete solutions by searching for new employment, (3) distracted himself by watching films with his children, (4) worked to maintain a sense of gratitude for the opportunity to spend more time with his daughters, and (5) began to regulate his physical symptoms with exercise. Though the stories of our lives do not always succeed in reaching such happy resolutions, knowledge of these basic strategies is often a vital step in the achievement of the emotional stability that is available to us all.