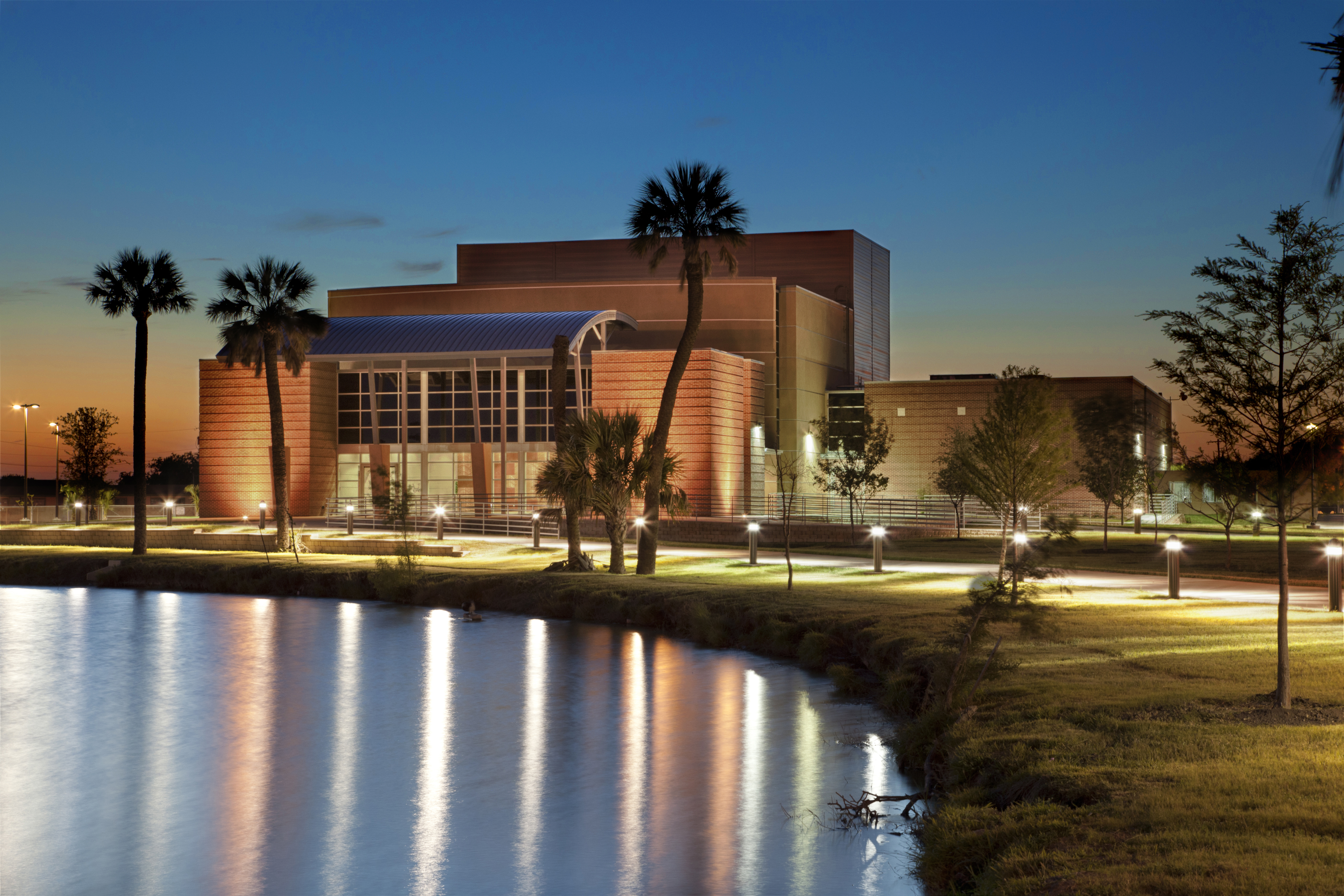 As a result of the collaborative efforts of SpawGlass, The City of Brownsville, Jacobs, consultants, and subcontractors, the La Plaza Multi-Modal is truly a spectacular project, far exceeding original expectations that successfully connecting public transit, rural, and intercity bus services.

Since the inception of the city of Brownsville, the historic buildings have featured domes.  In keeping with this tradition and to make the building more aesthetically pleasing, the exterior of the two-story building features 14 smaller domes strategically placed throughout the site and one larger, elevated dome tower that is a focal point and landmark, recognizable from several vantage points in the surrounding area.

The goal of this facility is to be a transportation hub where multiple modes of ground transportation converge and integrate with the regional, national, and international ground transportation operators.  SpawGlass Contractors, Inc. is proud of this project in particular, not just because of the challenges that continually were presented and overcome, but because it involved developing new and existing relationships with reputable businesses and city leaders who all worked together to turn a vision into reality.

The historic construction site was full of unknowns and new challenges that SpawGlass, along with Jacobs and the City of Brownsville, worked together to identify, plan, and execute successful outcomes in every situation.

As construction began in September 2009, 13 existing structures were demolished, and 80 percent of the debris was recycled.  As demolition was completed, 3 undocumented, underground fuel tanks from an old gas station were located and removed.

As this challenge was overcome, two inactive, underground, 12-foot diameter cisterns were located under the demolished foundation covered with plywood that had to be filled in and sealed to move forward with the site work.

Continuing to work together to achieve their goal, the city issued the utility package while the project was still in design.  SpawGlass worked with the adjacent University of Texas of Brownsville and surrounding businesses to coordinate street closures, including two permanent street closures and street reinforcements as work began with the city on extensive, unexpected obstacles with aging and undocumented utility lines.

Traffic from the University and the Gateway Bridge was successfully diverted without major interruption, while boring began that reached lengths of 100 feet and diameters of 6 feet to reroute and repair existing and install new utility lines.

As work progressed, traffic control around the downtown location was a challenge.  Street and signal closures changed on a daily basis which limited access to the jobsite.  Where most jobsites have multiple accesses, the La Plaza jobsite was limited to only one entry.

SpawGlass successfully coordinated materials to be delivered during times when heavy traffic could be avoided.  Potentially the largest hurdle was the torrential rains that began with Hurricane Alex in July of 2010.  Tropical Storms Hermine and Karl brought flooding in some areas of Brownsville recorded at 5 feet in September of 2010.  The building pad had been excavated but had not been filled in before Hermine made landfall and resulted in a 6 foot deep lake where the main terminal building currently sits.

SpawGlass proactively brought in 2 inch pumps before and after the storm and conveyed a 6 inch pump to drain the water completely out within 2 days, and 5 feet of select fill was replaced.

As a proficient construction manager, SpawGlass successfully worked with the city of Brownsville to identify, plan, and overcome all of the challenges without major impacts to the schedule, all the while maintaining excellent communication and personifying a team-work attitude.

The nation’s top construction award was given to the Robert B. Buchanan Performing Arts Instructional Center at Hanna High School.  The Associated Builders & Contractors bestowed the coveted National Eagle Award at its 23rd Annual Excellence in Construction Awards ceremony earlier this spring in Ford Lauderdale, Florida.

As a result of the collaborative efforts of SpawGlass, Brownsville ISD, and ERO Architects, this new beautifully-constructed facility provides a path for students to succeed even more than they already do. The students will be educated in theatre arts as well as technical theatre.  The band, dance, and choir students will be performing in a theatre and will learn fine arts etiquette, which is part of their curriculum as prescribed by the Texas Education Agency.

The audio/video and recording capabilities of this facility exceeds most similar facilities in the region.  The automated stage and lighting equipment allows the students to work with more complex theatrical systems.

SpawGlass was proud to be involved in all aspects of this project, along with ERO Architects and Brownsville ISD.

SpawGlass, along with ERO Architects and the school district, realized that their goal was to create a structure for a growing student body on a predetermined budget and reduce construction costs without reducing the function of the final product.

SpawGlass aggressively tracked the construction budget from start to finish.  Continued labor costs’ tracking and ability to self perform played key roles in completing the project on budget and ahead of schedule, and they ultimately resulted in saving the district over $280,000.

Early in the project and after the building pad was excavated, Brownsville experienced a freeze at the end of February 2011 that resulted in icing of the rain water in higher grounds surrounding the site.  Once the ice melted, the excavated ground was filled with water.  SpawGlass surveyed the site and pumped out the water and was able to restore the original pad without delaying the schedule.

As SpawGlass began scheduling this project, sequencing of the masonry work became crucial.  Progress on most subsequent trades was dependent upon completion of the load bearing masonry walls throughout the building.  Specifically, the 60 foot masonry walls in the performance hall were constructed in phases, allowing equipment and material deliveries inside the enclosed walls.  The grouted and reinforced CMU construction not only exceeds the structural code requirements, but also enhance the acoustical properties of the facility.

SpawGlass successfully shored, formed, placed, and finished a 6 foot deep elevated beam above the proscenium opening.  The overall length of the beam was 80 foot-6 inches with a clear span over the proscenium of 43 feet.  Additional elevated beams were required at various heights for support of masonry walls of the auditorium that SpawGlass placed and finished as required by the construction schedule.

Taking a proactive approach, SpawGlass erected scaffolding for the entire project.  This rendered control of the scaffolding and allowed multiple trades usage.  It was critical that the use of the scaffolding by various trades was scheduled carefully to allow timely completion of the project milestones.

In order to install the acoustic clouds and other components in the ceiling of the auditorium, the stepped seating area was formed after completion of most of the finishes inside the performance hall.

SpawGlass continues to show the company’s commitment to quality, teamwork, and successful outcomes on every construction site and in every project they take on.