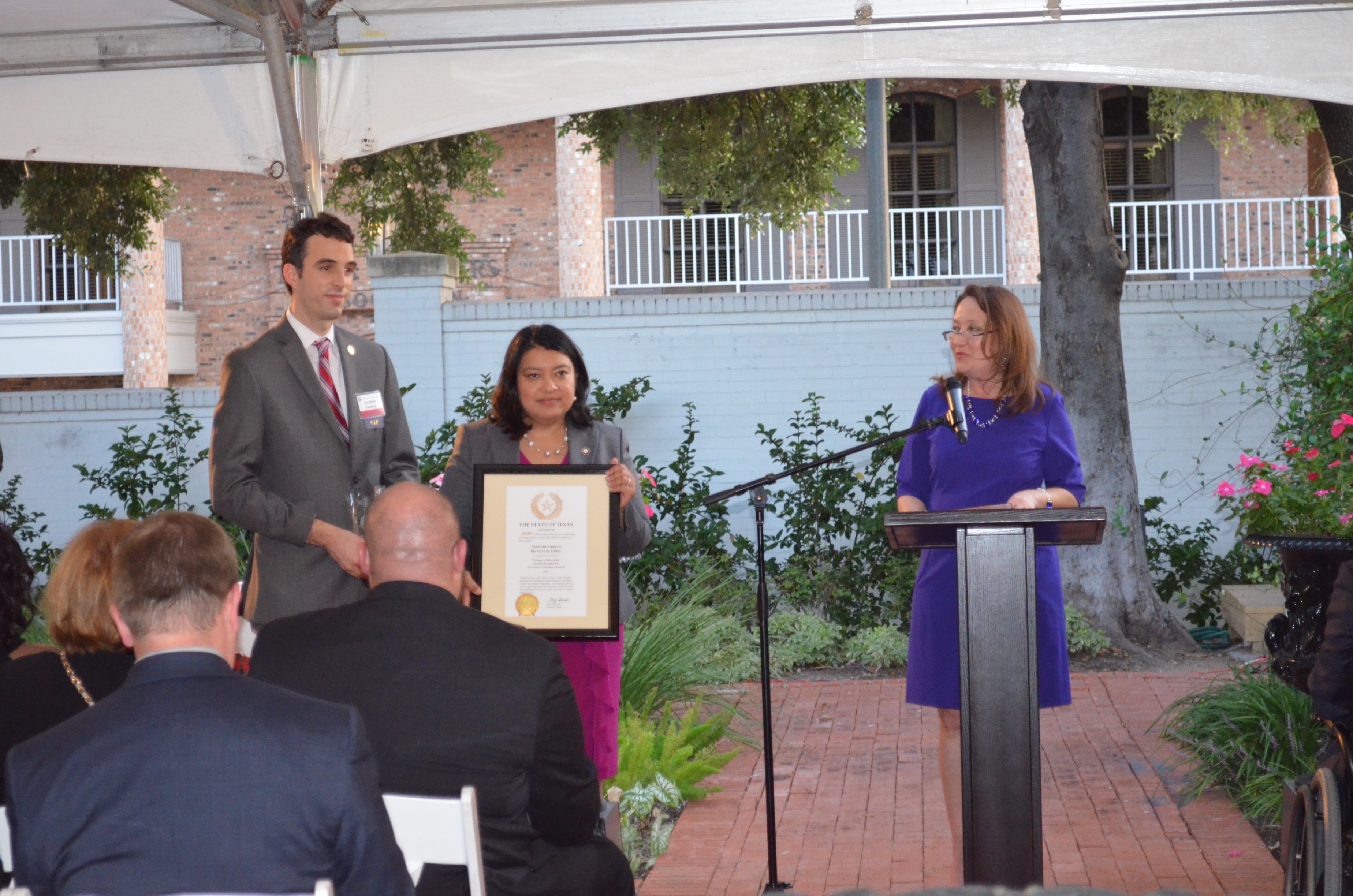 It’s a fall night in Austin, and the Governor’s Mansion is decked out. Guests mingle under historic paintings and crystal chandeliers. The atmosphere, usually thick with wheeling and dealing, is full of goodwill. It’s the annual Governor’s Volunteer Awards reception – a night to pause the politics and celebrate service.

Each year, nine Governor’s Volunteer Awards are given out to those who made an extraordinary impact through service or volunteering. The awards are a joint effort between the Governor’s office (First Lady Cecilia Abbott presided over this year’s ceremony) and the OneStar Foundation, an organization that works to boost Texas’s non-profit sector.

Two of this year’s awards recognized members of the Rio Grande Valley community. First, Teach for America Rio Grande Valley, an AmeriCorps affiliate, received the Partners in Education Award for their powerful impact on public education in the region. JoAnn Gama, founder and superintendent of IDEA Public Schools – and a Teach For America alumna – was also recognized. She received the Make-a-Difference Award for outstanding contribution to her community.

Dr. Paula Garcia, the Executive Director of Teach For America Rio Grande Valley, shared her excitement with us. “We were so thrilled to be recognized with the Partners in Education Award,” she told us. “And to have JoAnn, who is one of our most outstanding alums, win an award too was just the icing on the cake.”

Dr. Garcia heads up one of 52 national Teach For America regions. Teach For America (TFA, as it’s known) recruits and trains college graduates to teach in low-performing public schools. The idea is that putting talented, high-achieving young people in public school classrooms will raise student achievement levels. Whether or not this is true is a hotly debated topic, though a recent gold-standard research study found Teach For America teachers actually outperform their peers, especially in math. Locally, a study by the RAND Corporation found that 88% of Valley principals who worked with TFA teachers believe those teachers make a positive impact on their schools. 95% would hire another TFA teacher in the future.

Despite the debate, even the loudest TFA critic can’t ignore the organization’s impact. For 25 years, it has drawn thousands of the nation’s best and brightest (with a 15% acceptance rate, getting into TFA is only slightly easier than getting into an Ivy League school) to the public education field “We train generations of future leaders,” says Dr. Garcia. “Nearly two thirds of Teach For America alums stay in education, specifically in jobs that serve students of color and students in poverty.”

Like its parent organization, Teach For America Rio Grande Valley aims to transform public education in the region. What does that mean? According to Dr. Garcia, it means preparing every Valley student – no matter their racial or socioeconomic background – to graduate from college.

“You’ll often hear the phrase ‘college isn’t for everyone,’” she tells us. “To me, that’s not only false, it’s bad business. It lowers expectations for everyone, from the students to teachers to principals. It undermines our future as a region.”

TFA RGV sees a Valley education landscape where college is a given. “When everyone in a school knows college is the end goal, the atmosphere changes,” Dr. Garcia explains. “Teachers, students, and leaders all shoot for a higher bar, and the results improve accordingly. Not just for some kids – all students benefit from high expectations.”

If the Governor’s Award is any indication, Dr. Garcia’s vision is slowly becoming a reality. TFA RGV was founded in 1991. Since then, over 1,400 Teach For America teachers have taught in the Valley. This year’s corps of 130 teachers reaches over 8,500 students. Add that to the 177 Teach For America alumni still in the Valley, and you’ve got thousands of students – and parents – hearing TFA’s “college is for you” message.

Importantly, students hear that message from teachers with whom they identify. Of this year’s crop of TFA teachers, half come from poor socioeconomic backgrounds, two-thirds are people of color, and one third are Rio Grande Valley natives. Nearly a fifth of them became TFA teachers after having been taught by one themselves. “Students respond to teachers who know what they’re going through,” says Dr. Garcia. “They see how their teacher, who’s just like them, finished college, and they’re more able to picture themselves with that future.”

TFA’s indirect impact also makes a difference. Look at almost any education-related foundation, initiative, or organization in the Valley, and you’ll find Teach For America. Tom Torkelson and JoAnn Gama, co-heads of IDEA Public Schools, both served in the corps. The RGV Center for Teaching and Leading Excellence was launched jointly by IDEA, TFA, and the Pharr-San Juan- Alamo school district. RGV Focus, which makes school system “scorecards” to inform the public and improve accountability, has strong ties to TFA. These programs are changing education in the Valley, and Teach For America is right there with them.

Despite the impact, the growth, and of course, the Governor’s Award, Dr. Garcia still sees a long road ahead for Teach For America Rio Grande Valley. “We’re still at only an 86% high school graduation rate. The higher education rate is dismal. It’s predicted that only 22% of students like ours will earn a college degree within six years of graduating. What about the other 88%? What will they do? What does that mean for our economy, to have so few college graduates?”

These questions keep Teach For America Rio Grande Valley up at night. They drive people like Paula Garcia and JoAnn Gama to keep doing what they do: working for a day when all Valley students have the future they deserve. The Governor took notice of their work – when will the rest of us?