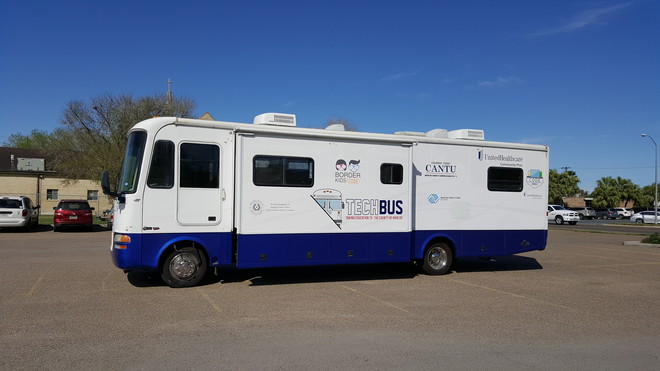 The latest technology, the newest devices, the hottest apps … in today’s world, trends come and go more quickly than ever. But amid the quicksand of technological evolution, there’s always one place to find solid ground: the internet.

The world wide web isn’t going anywhere. If anything, it’s becoming a bigger part of life. From job applications to government benefits, getting somewhere in this country takes an internet connection. That’s why it’s troubling that so many in our community live without household internet. In the 2013 U.S. Census, Valley towns made up three of the top five areas in the nation with the lowest percentage of wired homes.

TECHBus RGV wants to change that. “These days, you need internet access to apply to even minimum wage jobs,” says Dalinda Gonzalez-Alcantar, one of the founders of the TECHBus. Alcantar is also the force behind Border Kids Code, an organization dedicated to teaching the fundamentals of computer science in K-8 spaces.

TECHBus RGV is a mobile lab filled with computer learning stations that also emits a wireless signal so people in the neighborhood where it’s parked can get online. However, it is far more than an internet hotspot — it is a complete mobile classroom. “Our goal is to give students and adults not only internet access, but also the skills to gain opportunities through that access,” says Gonzalez-Alcantar.

Aboard the TECHBus mobile computer lab, visitors learn today’s most important skills, including coding, Google Drive, and other digital skills that will help them land a job in today’s tech-savvy job market.  Students and adults are initially walked through setting up a free email account so they’ll be prepared to receive and send digital information. “We also talk to our students about how to behave online,” says Gonzalez-Alcantar. “Today more than ever, it’s important to manage your online reputation so that it reflects your best self.”

So how did the magic of the TECHBus come into existence?  “We pitched the idea to Commissioner Cantu,” says Gonzalez-Alcantar, an educator and an entrepreneur.  Hidalgo County Commissioner Eddie Cantu has a history of making things happen in his community (see his ACT prep initiative for reference),  and this project is no different. “In basically no time, we had our bus to serve Hidalgo County,” she says.

Together, Alcantar and Commissioner Cantu are a technological dream team. Gonzalez-Alcantar brings the educational expertise and Commissioner Cantu brings, well, the muscle. “With our skill sets, we can bring internet access, computers, and technology best practices to children and adults in our community,” says Gonzalez-Alcantar. “And, since it’s mobile, we can bring it to them where they are.” The internet is here to stay. With TECHBus RGV, you can make the most of it.

Want to check out the TECHBus? You can follow its location at www.techbusrgv.com and on social media. The bus can also be booked; school systems in Hidalgo County are already taking advantage of that feature. Join them and the many others who are creating a better life for themselves with technology.