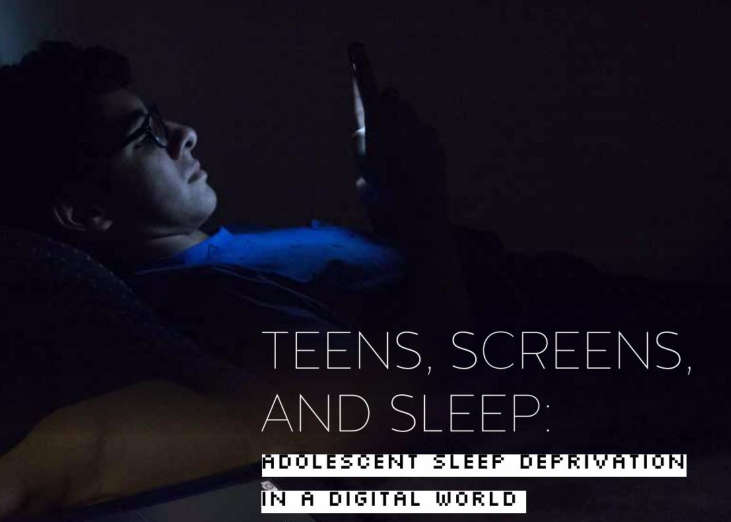 Today’s teens are more sleep deprived than ever. Over half of American teenagers get “insufficient sleep” – defined as less than eight hours a night – according to a poll by the National Sleep Foundation. How did a group infamous for sleeping late become nationally known for not sleeping enough? Experts put the blame on too much screen time.

“Looking at phones, tablets, laptops, and other screens too close to bedtime will disrupt anyone’s sleep,” says Dr. Rizwana Sultana, Assistant Professor at the University of Texas Medical Branch’s Department of Sleep Medicine. “But screens are especially bad for teenage sleep.” According to Dr. Sultana, adolescents are more vulnerable to screen-related sleep deprivation due to a unique combination of biology and behavior.

First, screens interrupt the body’s normal “winding down” system. Usually, around bedtime, our bodies produce a sleep-inducing hormone called melatonin. Melatonin is triggered by dimming light; it’s the body’s way of saying “hey, it’s night time, let’s get some sleep.” Staring at the bright blue light of a screen before bed delays melatonin production, making it harder to fall asleep.

The melatonin issue is not exclusive to teenagers – anyone who looks at their phone or tablet too close to bed is susceptible. The trouble is that teens have a much harder time putting the screen away at night. “For one thing, they’re not as sleepy, says Dr. Sultana. “Adults have a hard time staying awake when we’re tired. Teens can do it easily, at least for a while.”

And then there is the social factor. Remember when nothing was more important than your social life? That hasn’t changed, only now, teen social lives are carried out in text messages and displayed on social networks. Imagine all the friendships, crushes, fights, and fun you had in high school condensed into one three-by-five inch screen. Adolescent peer interactions have gone digital, and it’s turned screens into teenage kryptonite.

We spoke to some local parents to get their take on the teen sleep issue. “I definitely noticed a difference in my daughter’s sleep when she got her smartphone,” says Melissa, a Donna, TX mother of a fifteen-year-old. “It was like she couldn’t turn her brain off.” Melissa adds that it’s not just texting, Instagram, and Facebook that keep her daughter from sound slumber. “More and more, her homework requires a laptop. She also checks her assignments from her phone, or uses the iPad to do research. She can easily be working on a screen right up until bedtime.”

Melissa’s daughter, Andrea, provides a teenage perspective. “Most of my friends sleep clutching their phones in their hands. I get texts at 2:00 in the morning sometimes,” she says. “I’d probably do the same thing if my parents didn’t stop me. I know looking at a screen at night is bad for my sleep, but there’s just so much on my phone.”

Andrea makes a valid point – with the world at your fingertips, it’s easy to de-prioritize sleep. But doing so has serious consequences. According to Dr. Sultana, teenagers need about 9 to 10 hours of sleep per night. “Sleep plays a critical role in physical and mental health,” she explains. “When teens miss sleep, they don’t receive these vital benefits.”

There are academic consequences too. “Sleep is a time for memory consolidation,” Dr. Sultana says. “Teenagers in school learn so much each day. With inadequate sleep, they aren’t as likely to remember everything.” Even more alarming, missing sleep can wreak havoc on teenagers’ moods. The same National Sleep Foundation study from earlier found that teens who didn’t sleep enough reported feeling more depressed, irritable, and cranky than their peers who got the recommended amount of shut-eye.

Clearly, teens need their beauty rest. And while the lure of the screen is powerful, there are ways to make sure teenagers get their 40 winks. Sleep experts recommend creating a healthy sleep routine. “I tell patients to set a nightly bedtime and stick to it,” Dr. Sultana explains. She also warns against relying on catch-up sleep. “Sleeping late on weekends may temporarily reduce sleep debt, but it makes falling back into a good routine on Monday difficult.”

When it comes to screens, Dr. Sultana suggests both teens and parents put away their devices at least one hour before bedtime. ‘“Parents need to model the sleep behavior they want to see in their teenagers.” Melissa agrees. “In our house, phones and computers and tablets are all turned off at 9:30, including mine and my husband’s.”

Lastly, it’s important to invest teenagers in protecting their own sleep. “Teenagers are moving into a stage where making their own choices is important to them,” Dr. Sultana tells us. “And usually, when they hear the facts about screens and sleep, they’ll self-regulate their bedtime smartphone habits.” All of this sounds like there’s a light at the end of the tunnel for today’s sleep deprived teens. Let’s just hope it’s not a blue light.