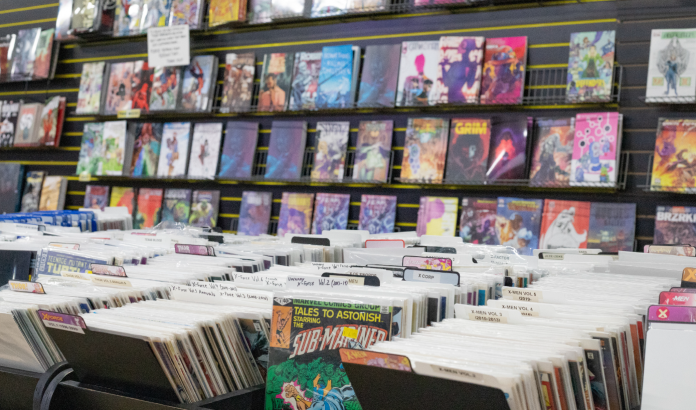 The year was 1983 and the third installment of George Lucas’ Star Wars had just hit theaters. Sullivan City native Ramsey Ramirez could be found sitting in the front row. From that moment, Ramirez would develop what he refers to as a “love affair” with the series, going as far as to make a lightsaber by sharpening the straightest stick he could find. His passion for geek culture would lead him to open Kaboom Comics & Collectables in 2010.

“I originally opened Kaboom hoping that I could read comics all day, and it ended up not being true,” Ramirez said. “It ended up requiring a lot of work and even involved less comic reading than I would have had, had I not opened it.

“Basically I had a decent-sized comic book collection. I had a huge ‘Star Wars’ and Marvel collection. I coupled all that with new products, then I was able to open up the store.”

Today, Kaboom Comics is located in North McAllen off 10th St., but it began in a smaller location further south off of 8th St. and Pecan. Ramirez ran an advertising agency from the original location. The office had some extra room, which he decided to use as a way to gain an extra income. Thus, Kaboom Comics was born.

“My main focus for Kaboom is for people to be able to walk in, and if you’re older, you’ll see things from your childhood that’ll bring back good memories, good feelings,” Ramirez said. “If you’re young, maybe it will make your eyes grow wide with wonder. Sometimes parents don’t have the money to take their kids to really expensive vacations or anything, but, hey, right here in the Valley, you can take them somewhere and hopefully help replicate some of those good feelings for free.” 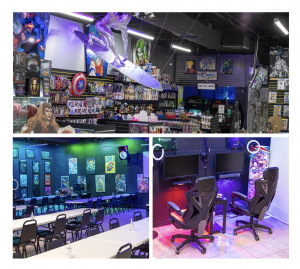 Having already worked in advertising and obtained a degree in graphic design, Ramirez had a good foundation to build the Kaboom brand.

“Comic books are kind of famous for the ‘pow’ and ‘bam,’ type of sound effects,” he said. “So, I wanted to go with something along those lines.

“I was sitting at a computer thinking, ‘OK what am I going to name this thing?’ And I just thought, ‘Kaboom.’ There was no real grand, intricate story, no. It’s just a famous sound effect that you would see in comic books, and I wanted to associate that. I created the two little bomb logos and we went from there.” 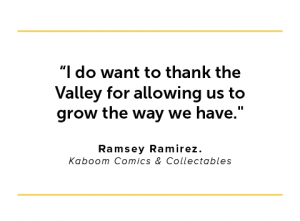 Ramirez said he would not be where he is today without the support of the Rio Grande Valley community and its love of geek culture.

“I do want to thank the Valley for allowing us to grow the way we have,” he said. “I didn’t really think geek culture, nerd culture would necessarily work down here at the time. If you wanted to go to a comic con or something, you’d have to travel.

“I decided to give it a try and just hoped that the Valley was ready for it. Luckily, they were. Hopefully, we’ll keep creating things that they want to come to and attend.”