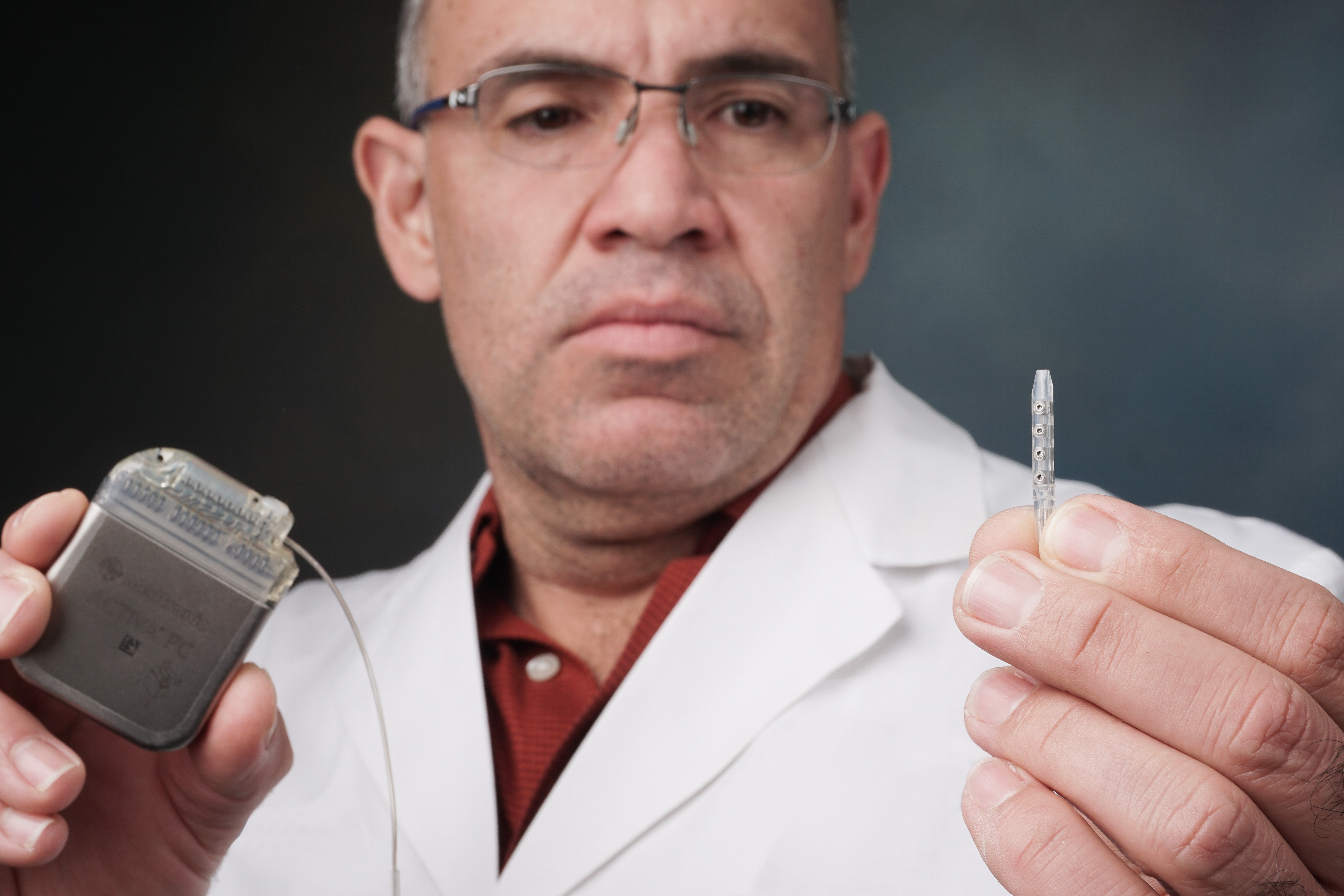 When James Parkinson, British physician and geologist, noted shaking palsy in his most well-known essay, it may not have been the first time that “shaking” was used to describe the ailment now attributed to his name, and it certainly was not the last. Since the discovery of the neurodegenerative disorder, treatment for Parkinson’s has made strides, and Dr. Jose Dones of Harlingen has helped patients manage symptoms with a procedure known as Deep Brain Stimulation (DBS) surgery.

Linda Cheshire, a West Virginia native, described her husband’s experience with Parkinson’s in a blog, “The Shuffle, Tremor, and Other Moves.”  She wrote about meeting her husband, Richard, for the first time and noticing “the slightest hint of a tremor in his right hand.”  Richard was born and raised in Los Fresnos, where he is a coach, Physical Education teacher, and referee. His professional life required being physically active, and he is fit for a man his age. Linda describes how agile he was on the court compared to younger officials. “When I watched him referee I had often noted how he could run faster [sic] backward than many of his younger colleagues could run forward.” However, a life of athletic activity and a family history of no known ailments aren’t guarantees to perfect health.

After a visit to his general physician for increasing pain in his right knee, the doctor was able to discern from a shuffle in his walk that Cheshire had Parkinson’s. Their initial reaction was not one of shock, but one of proactivity. “I had noticed the shaking in his right hand a great deal, and we’d never asked the doctor about it or been told that,” said Linda. “But I had (in the back of my head) the thought that this could be early Parkinson’s.” Richard was also not surprised, given that his father lived with a tremor. “I know my dad had shaking in his right hand, but as far as I know he never went to the doctor about it,” he said. Their neurosurgeon confirmed the diagnoses, recommended Deep Brain Stimulation (DBS) surgery, and put Richard on a Carbidopa-Levodopa regimen. It is commonly believed that Parkinson symptoms result from the deficiency of a neurotransmitter called dopamine. This assumption is made because medications, such as the above, catalyze and sustain the production of the neurotransmitter. However, a lack of said neurotransmitter as the cause of Parkinson symptoms has never been proved, nor are neurotransmitter levels in the human body measurable. Though symptoms are momentarily relieved, the brain begins to develop a tolerance to the drug. Symptoms recur partly for this reason, and partly because the neurodegenerative disease progresses. This happened to Richard. For two years, he left his neurosurgeon’s advice to have DBS surgery unheeded, but the symptoms persisted. “The shaking of the hand and shuffling of the feet finally came back one day and I said, ‘I’m gonna have the surgery,’” remembered Richard.

DBS is a neurosurgical procedure involving the implantation of a pacemaker near the thalamus, (opposite the side of the body where symptoms manifest) which delivers continuous electrical stimulation into the brain via the complimenting pacemaker-like mechanism (typically placed on the patient’s chest). The procedure has shown to treat Depression, Obsessive-Compulsive Disorder and Epilepsy, though not yet approved by the Food and Drug Administration for these purposes. Treatment for Parkinson’s was approved by the Food and Drug Administration in 2002 and shows promising relief of symptoms in most patients for extended periods of time.

Going into surgery with Dr. Dones, Richard thought that it could do him some good if nothing else. “I was hoping that at least the shaking in the right arm and the shuffling of the feet would stop,” he said. Two years after surgery, Richard lives well. “I’m happy! It helps my life to the point where I can live with it.” He tells his story to anybody who gives him half the chance, including educators in Weslaco High School, some of whom have family members or friends with the disorder. Linda participates in telling others the good news about Deep Brain Stimulation as well.  “I talk also of the changes I can see in him… For him, for us, it was an answered prayer.”

Their answered prayer came in the form of receiving around-the-clock assistance from the technicians at MEDTRONIC, a Medical Device company based in Ireland with clinics throughout the United States. It is the world’s largest medical device company and the only one that provides Deep Brain Stimulation services. The personal experience the Cheshires have received has been satisfactory beyond expectations. They feel assured that any question will be answered and handled properly by their designated technician, Manuel “Manny” Molina, with whom they have developed a chummy relationship. “He explains things,” said Richard. “He’s upbeat, kind of funny in a way,” he said, and chuckled. “He’s very pleasant to work with!”

The urging of the Cheshires to anybody who has or may have Parkinson’s is full of a certain pragmatic optimism. “If you’re looking for a 100-percent cure, you will not find it,” said Richard. “ It doesn’t bother me that I still shake if I do certain things. I just try not to do them and get on with my life.”

Some activities that trigger tremors are brushing his teeth, eating and watching suspense films, but he adjusts without complaint and doesn’t let the tremor impede on his mobility. “Sometimes I just really start shaking and I have to eat with my left hand instead of my right,” he said. Brushing his teeth is another trigger, so he uses an electrical toothbrush, and has found that if he raises his right elbow above his shoulder the shaking is less. The suspense films are treated with an anti-anxiety medication.

While there is no known cure for Parkinson’s – or any other neurodegenerative disorder for that matter –  Richard has received a new lease on mobility and does not miss any opportunity to appreciate it.  “I really want other people to know about it,” said Linda. She acknowledges there are many who may be going through the most debilitating stages of the disease who should know that the potential for a better quality of life awaits. “Give it a good try. For some, it may not be recommended depending on the advancement of the disease,” wrote the occasional blogger.  “It may not work for that person, but then again, what if it does? What if it does…”

Through their journey, they have generated a cure for pessimism, adumbrated with a trust in medicine and the science that backs it, along with a proactive spirit that chooses to make the most of any progress attainable.  “I hope it touches someone and helps give them some hope. A much higher quality of life is possible.”