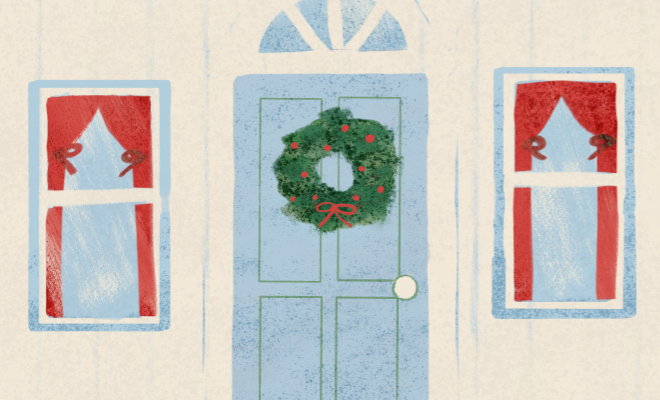 The old family wreath woke with a start as the attic door creaked open and a shaft of light entered its cardboard box. Soft footsteps shuffled over, and Grandma’s weathered hands dusted off some cobwebs. “There you are,” she smiled. “It’s been a while.”

And it had. Grandma hung the wreath on the front door and closed it, leaving the wreath to look out into the fresh winter air. It yawned and stretched to wake up a little bit while reminiscing over the past years.

Its favorite years were when the grandson was small. He loved Christmas, and he especially loved celebrating at Grandma and Grandpa’s. He would jump out of the truck with a squeal and run into Grandma’s arms, and the whole family would pass by the wreath to go inside, smiling and laughing the whole way. The grandson was always the loudest one talking about how good the warm cookies being baked smelled. Even once the door was closed, the wreath could hear cheerful music, excited chattering, enthusiastic “I love yous,” and tinkling laughter all through the night.

There were several years in a row when it seemed like the son didn’t seem to want to be there. He was older now, and he had other priorities that he would rather focus on instead of “boring” family time. Grandma’s and Grandpa’s smiles were a little smaller, and hugs were brief.

“I get it,” thought the wreath. “He’s just figuring himself out.”

The smell of the cookies and hot cocoa were the same those years, but the holiday spirit was much more subdued, and not much music or laughter reached the other side of the door. The wreath felt a little blue hanging on the door in silence. The chilly air outside had more of a sharp kick to it those years. The wreath wasn’t as fond of that time period, and it shuddered just a little with the memory.

“I wonder what this year will be like?” it thought. It didn’t know how exactly long it had been in the box in the attic, but it knew it had been quite a while. It continued to ponder this until two vehicles pulled into the circle drive. The first car had Grandma and Grandpa’s daughter and her husband. It took awhile for the wreath to realize that the driver of the second car was the grandson, and the woman and children must be his own family.

They honked the horn and started singing their favorite holiday song that the wreath knew so well. The door swung backwards as Grandma and Grandpa opened the door and started waving from the front porch. “This is a little strange,” thought the wreath. “Why aren’t they

getting out of the cars?”

The whole family was wearing masks, but it could tell that everyone was smiling and happy to be there.

“We miss you so much! We wish we could celebrate with you this year like we used to!” shouted the grandson from his driver seat. Grandma and Grandpa looked so happy. The wreath could feel it.

“We left your presents and cookies in the mailbox!” they shouted back.

The family sang a few holiday songs together that were blasting from the car radio while the kids in the back seat danced along with Grandma and Grandpa until it was time to go.

As the cars drove away, Grandma and Grandpa continued to smile and wave until long after they were out of sight. They reentered the warmth of their home with a sigh of contentment.

“How bizarre,” thought the wreath. “But, how lovely at the same time.”

Which social distancing celebrations has your Christmas wreath witnessed this season? #JoinTheConversation at facebook.com/rgvisionmagazine.