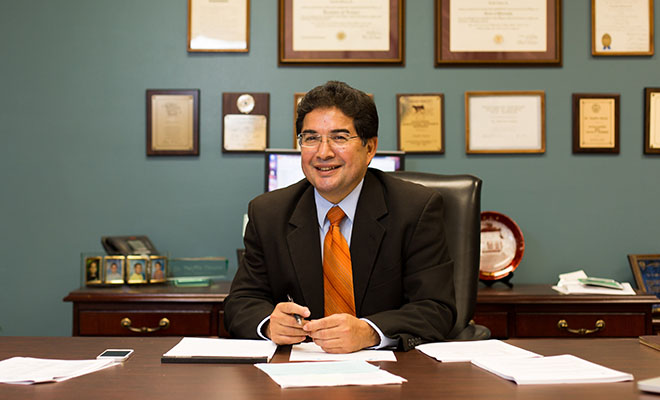 A dean’s office might often be an intimidating place, but not at the University of Texas – Pan American, where business students find in Dr. Teofilo Ozuna less of a distant advisor and more of a friend and leader who’s been in their shoes.

The Edcouch native has experienced many of the doubts and obstacles faced by students. His upbringing was in a migrant farmworker family and he picked fruits and vegetables all over Texas, California, and Nebraska. “Because of the difficulty and long hours of farm work, my parents taught me the value of an education,” he explains. As a result, Dr. Ozuna’s good grades earned him a college scholarship in 1973. “That only lasted one semester,” he shares of his brief time as a UTPA student. But quitting school didn’t mean Dr. Ozuna stopped working hard. “There was a rule in our home that you had to either study or work and help the family.” He continues to acknowledge the wisdom from his parents, who encouraged him to be the best at whatever he choose to do.

The turning point for Dr. Ozuna came when he married his wife, Mirna, in 1975.  “She was the one who convinced me to attend the University again,” he recalls. This important step would require more than a simple decision. “Since I was going to be attending the Universidad Autonoma de Nuevo Leon, I had to go back to high school in Monterrey, Mexico for credits in physics, calculus, biology, chemistry, and botany,” he explains. Armed with a newfound determination, Dr. Ozuna finished the classes in one semester.

His next educational milestone would be attending the Universidad Autonoma de Nuevo Leon in Monterrey, Mexico. “By this time, I had my first son and my daughter was on her way,” Dr. Ozuna remembers. To provide for his growing family, he returned alone to work in Houston and subsequently transferred to Texas A&M University in College Station where he received a scholarship to continue his studies.

While looking forward to vacations with his family in Monterrey, his days were filled with classes and a full-time job.  “The busier I was, the less I thought about missing my wife and kids,” Dr. Ozuna notes. Such dedication paid off, as he finished his Bachelor of Science in Agricultural Economics with a concentration in Agribusiness Management without any loans. “When someone comes to my office wanting to leave the university because of children or work, I ask, what’s the problem?” he tells of how his experiences motivate UTPA students today. “You can do anything you really want to but you need to find your mentors to help you through the difficult times whether academic or personal.”

Dr. Ozuna received his undergraduate degree in 1981 with three kids, a supportive wife and the desire to reach a higher level of education. “Once I started my PhD, we lived in married school housing,” he mentions, pointing out his wife’s talent in managing their finances. “I don’t think I could’ve done what I’ve done if it had not been for her.”

Besides his family, Dr. Ozuna also credits his success to the support he received during school. His great intellect and relationship with his mentor, Dr. Lonnie Jones, and the faculty at TAMU earned him a position as a tenure-track assistant professor  one semester before finishing his PhD in 1989. He proceeded to teach at A&M until his move to UTPA in 2000.

Fourteen years later, Dr. Ozuna is glad for this decision, as well for the path that led him to where he is. “I still remember lessons I learned working in the fields,” he states. “Being proud of what you do, where you come from, and doing the best you can.” Today, Dr. Ozuna appreciates even the hardships of his school years. “At Christmas, we’d get a dead tree, paint it white and decorate it with cranberries and pocorn,” he smiles. “When you don’t have a lot of money, you become innovative.”

The former shy farm worker now has a passion for inspiring confidence. With the help of UTPA’s business faculty, Dr. Ozuna developed the Business Leadership Initiative, training about thirty students in leadership each semester, and the Executive Mentor Program, where sophomores are paired with an executive in the Rio Grande Valley. “That exposes them to a business environment and develops their professionalism and confidence,” he highlights.

As UT Brownsville and UT Pan American become UTRGV, Dr. Ozuna believes more programs will be developed that enhance the success of business student as well as students in other majors. “That will be tremendous to this area,” Dr. Ozuna assures. “It increases the possibilities for  all our students and moves the mindset from change to progress and well-being.”

Positive that opportunities for Rio Grande Valley’s graduates are on the rise, he advises our educators to value interpersonal skills as well as academics. “Look students in the eye and tell them they will succeed,” he suggests. “When that confidence is there, we can move out of the way and they’ll take over the world in a good sense.”