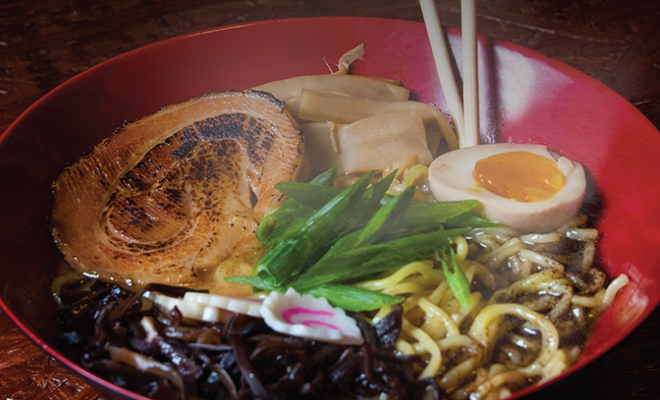 Stepping into the new Dragon Warrior Noodle location in Edinburg, you will experience the original concept of what Jason Jon Villarreal has always had in mind for his ramen shop. From the layout of the room to the furniture, to murals on the wall, this is it. It always has been.

“This is what I envision when I think ‘dragon warrior,’” he said, admitting that closing the doors to the McAllen location was bittersweet. “That was a great restaurant, but this is truly a ramen shop.”

Dragon has grown more in popularity since it first opened its doors in 2018. Every single bowl of ramen is prepared individually, and it’s the attention to detail that continues to rope in visitors from all over the Rio Grande Valley.

Born into a musically inclined family in San Juan, Villarreal fell in love with music at a young age. Villarreal left the Valley when he was 18, and by 2008 found himself in the capital of Texas, touring with several bands while also working in the culinary world.

“I was fortunate to work with a lot of great places and meet a lot of people through music,” he said. “Austin is a tourist town — the hospitality is huge. There’s a lot of top chefs there, so the standard [for food] is really high.”

Through music and food, he was able to learn about different cultures and meet people of different ethnicities.

He was on the road when he was first introduced to a new concept of ramen. He has always had a soft spot for Asian food, and when he had Ramen Tatsu-Ya for the first time, he was hooked.

The combination of flavors in the marinades at Dragon Warrior Noodle is an ode to all of the food Villarreal tried while touring. When he moved to Colorado in 2013, his love for ramen lingered in the back of his mind. He recalls wondering why there weren’t any ramen shops in the area, and the idea to open his own ramen shop became tangible. With a push from his son’s mother, Villarreal considered it.

Putting this into perspective, he reveals that he had only ever made ramen at home, and never in mass quantities. “I had tons of kitchen experience and worked for amazing chefs in the past,” he said. “But that’s different.”

Everything on the menu was inspired by the foods he had on the road while touring.

“I tried ramen from about 50 to 75 different places, studied flavor profiles, talked to some Japanese chefs in Austin, and from there I just figured it out,” he said.

What he was hoping to start as a small ramen shop in the Valley ended up growing fast. Villarreal has taken his love for the culinary arts and incorporated his own variations into every dish at Dragon Warrior Noodle.

Foodies can expect to be blown away by the Japanese-inspired ramen, and experience an abundance of Asian elements throughout the menu at Dragon Warrior Noodle.

Villarreal believes ramen is a dish best served and enjoyed hot, immediately after it’s ready. For that reason, ordering ramen to go wasn’t an option until last year. Reluctant to take away from the full ramen experience, he cautiously tampered with the idea of going curbside mid-March.

The decision to finally do it was more so due to the mandatory shutdown implemented at the time. And with what seemed like a tough, uphill battle, Villarreal improvised time and time again to cater to Dragon Warrior Noodle diehard fans.

From having to close the McAllen location temporarily; to offering curbside and being slammed with orders the first two hours after reopening after the shutdown; to offering delivery; to now only being open for exclusive hours to accommodate his crew, Villarreal’s resilience is evident in his determination to overcome all odds.

As 2020 continues to surprise us, Villarreal is excited to share his culinary creations with the people of the Rio Grande Valley. In late July, at-home ramen kits became the latest addition to their neverending list of adaptations implemented upon the pandemic’s arrival.

With these kits, Villarreal hopes people will be able to truly see how much work goes into each bowl of ramen. “It’s a labor of love,” he says, admitting that some of the ingredients in the dishes take upward of 10 hours to make.

Though he has experienced many setbacks throughout his journey, they serve as a reminder of the meaning behind the ramen shop’s name.

“Dragon Warrior Noodle is based on all the obstacles in my life,” Villarreal said. “When my son was born, I was playing music and I was living a certain lifestyle. He brought me back from one extreme to the other, and that other brought me in this direction and I’m really grateful for it.”

A huge Jack Black fan, Villarreal introduced his son to the Kung-Fu Panda series when he was about 3 years old. His key takeaway is Po overcoming obstacles no matter how bad he’s being told he can’t do something.

“If you have the heart, that’s all that matters and that’s really the main point for me,” he said. “He goes through all of these obstacles and everybody thought he was a joke and it turns out he’s the ultimate dragon warrior.”

Dragon Warrior Noodle is located in Edinburg on University Drive between Jackson and McColl. For updated hours of operation, follow it on social media.

What is your go-to ramen bowl at Dragon Warrior Noodle? #JoinTheConversation at facebook.com/rgvisionmagazine.