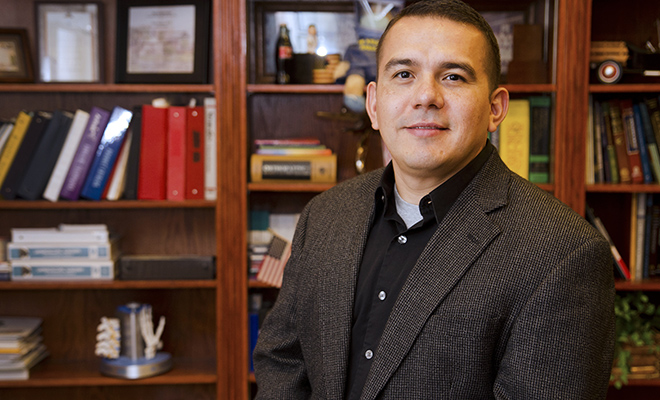 To some, the calling for orthopedic work happens at school. Others receive it during a game of rugby.

“I’ve had my ribs and fingers broken,” shares Francisco Rodriguez Jr., the former member of the Texas Rugby Union who now dedicates himself to rehabilitating injured athletes.

Talented in flag football, soccer and softball, the young Rodriguez knew he was meant for a hands-on career. At seventeen, he joined the Fighting Texas Aggie Corps of Cadets, which Rodriguez describes as life changing. “I learned the meaning of unity, respect, honor, selflessness, and integrity,” he highlights, adding that four years with a diverse group of cadets helped him shape his own identity. “My experience there and my faith in God and Jesus Christ have made me the man I am today,” he explains.

Rodriguez credits his mother, a nurse, as a great influencer on his choice for a career in healthcare. Paired with the discipline he learned while being a cadet, her encouragement fueled him to reach beyond his degree in Biomedical Science in 1998 through Texas A&M University. “I never thought of just completing my bachelor and being done,” Rodriguez shares. “I always wanted to do more.”

The former player for the McAllen Knights RFC has no regrets in trading in the sports field for the medical field. Aside from his interest in orthopedics, Rodriguez mentions his family as the main reason why he prefers to remain safe from rugby injuries. “My wife and my daughter are now the priority,”

Rodriguez finds a comparison between his work and coaching as he instructs patients on how to take better care of their joints. His passion for mentoring comes from the two years spent teaching Physics and Chemistry at Roma High School, from 1999 to 2001. Rodriguez never forgets the support he received during his own academic years, through mentors such as the late Ms. Isela Gonzalez, Mr. Arturo Perez from Biology, Ms. Vasquez from Calculus, Mr. Alvarez from Chemistry, and the priest of his church, Father Roy Snipes.

A moment when Rodriguez felt most grateful for these role models was during his applications for undergraduate and graduate degrees. “As a first generation college student, I didn’t know all the ins and outs of loans and scholarships,” he recalls. “The small amount of time a teacher can take out of their schedule to help out a student can make a great impact on their life.”

Today Rodriguez takes any opportunity to be that mentor to anyone who chooses to follow in his footsteps. “The great thing about orthopedics is instant gratification,” he comments. “When someone comes in with pain, we can give them a shot and solve their problem.” Always available to answer questions about orthopedics through his email fjr_1975@yahoo.com, Rodriguez believes persistence is key to succeed in this or any other field. “It’s important to keep at it,” he advises, “even if some doors will close.”