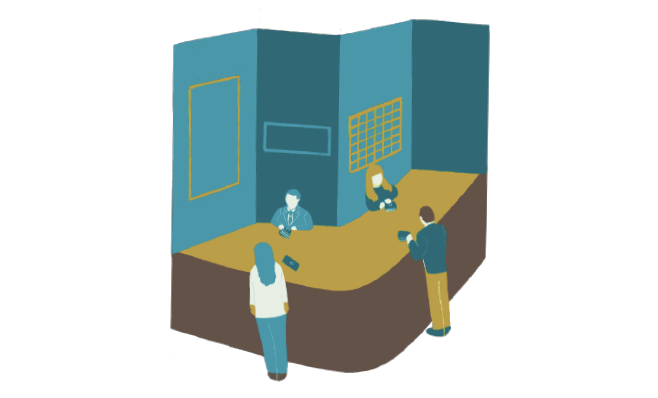 How many of us today could name one person from the bank we trust to take care of our money? Even before 2020 turned the world on its head and caused companies to completely rethink how to run their respective industries — and how to allow their clients to safely conduct business — banking was already seeing a massive change in how customers interacted with their finances.

Bob Dunkin, former CEO and President of First Community Bank in San Benito from 1979 to 2010, recalls the “early” days of banking. “In 1945, when I was a young teen, my father founded Harlingen National Bank,” he said. “People who were shopping at the local grocery store parked in our parking lot, so I was tasked with letting them know we were a new bank and inviting them to bank with us.” Soon enou

gh, Dunkin was “promoted” from inviting shoppers in the parking lot to working inside. He moved from one department to the next, learning all the ins and outs of banking — from working on the combined ledger, a huge hard-covered book with everyone’s accounts painstakingly tracked in ink, to being a teller, and beyond.

After completing a bachelor’s of business at the University of Texas, Dunkin went back into his father’s bank — this time, in a PR position. In the 1960s, the Valley became an attractive option for out-of-state families seeking reasonably priced homes. The affordability of the homes, the low cost of living, and the beautiful weather enticed families from up north to plant roots. Dunkin saw an opportunity to grow the bank, driving to the homes and offering his bank’s services. He then planted a palm tree in the front garden of any family who joined the bank. “You can drive through some of those areas today and see many of those mid-century homes still with their palm trees,” Dunkin said.

In 1979, after working in the bank with his brothers (his parents and wife were killed in a tragic car accident a few years prior), Dunkin decided to strike out on his own and founded First Community Bank in San Benito. “We were in a house trailer,” Dunkin said with a chuckle. “Not the best way to engender confidence in your bank or its founder, is it? But soon enough we were able to erect a gorgeous building and we grew from there.”

Then the 1980s happened. According to the FDIC, from 1980 through 1989, 425 Texas commercial banks failed — including nine of the state’s 10 largest bank-holding companies. These banks had not diversified their portfolios and when oil and real estate crashed, so did they. But First Community Bank did not. In fact, according to Dunkin, not only did they not experience losses, the bank actually grew. Dunkin attributes the bank’s success to personal relationships and the ability to use technology to their advantage, picking and choosing what would work for them and not just always going with the latest and greatest — unless it added value.

But that was then, and this is now. What does banking look like in 2021? Michael Scaief, chairman 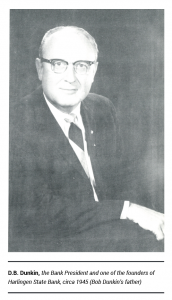 of Texas Regional Bank, has been a part of banking in one way or another since the 1980s, moving from a position as a teller, then as a trainee manager, to buying a bank and opening its doors on May 7, 2010. During that time he saw the 1980s collapse of banking (with its resultant banking term, “Texas Ratio”), to out-of-state banks being allowed to operate in Texas, the buyouts of smaller institutions by national and international banks, and then the growth of online banking and mobile apps.

“We knew we wanted to get back into relational banking,” Scaief said. “In the previous two or three decades, the banking model had changed so drastically; bankers were expected to push growth, watch the bottom line, but spending time with the public, being a part of the community, getting involved with the local chamber of commerce, sponsoring little

league, was frowned upon. However, we lost the relationships that actually make us who we are.”

As a result, Texas Regional Bank has forged wonderful affiliations with everyone and everything from corporations to local families. “Households drive business,” Scaief said. Currently, the bank carries the accounts for around 40,000 families. In March 2021, the bank opened 550 new accounts — in a time when around 300 per month new accounts is the norm. Growth of the bank has also allowed expansion in wealth management and in setting up trust funds.

Texas Regional Bank also has an eye on the international market. “Mexico has a tremendous economy and our relationship with them in terms of foreign exchange trading could not be better or more robust,” Scaief said. “We are able to compete 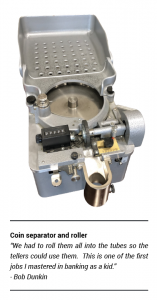 in the international arena very comfortably.”

What really sets Texas Regional Bank apart from other banks, including some of the larger national banks, is that it funds locally, deposits locally, and loans in the community. That means the money works for the community at large — not for some nameless entity that may or may not be in Texas. This bolstered as the world faced a pandemic and an uncertain future.

“Mobile apps and the ability to do almost everything you need to do on your phone was a lifesaver in one way,” Scaief said. “Drive-thru banking instead of lobby banking became the mainstay of our locations. And although mobile apps are great, and in 2020 were definitely a way we could connect with our customers, at the end of the day we still want relationships with our customers.”

One way they maintained — and even grew — relationships

with customers during the pandemic was by giving clients extensions on loans. Another way was by ensuring that small businesses knew how to apply for the Paycheck Protection Plan (PPP), in many cases walking business owners through the process.

There is a proverb that goes, “The more things change, the more they stay the same.” This is true in almost every aspect of life — even banking. Historically, banking has been about relationships and trust, forging connections and being the cornerstone of a thriving community. There have been times, it seems, where that has not been the case, where a client has felt nameless and faceless. Dunkin saw that happen during his 60 years of banking. He saw the results of banks so worried about the bottom line they forgot who they worked for. Today, however, with men like Scaief at the helm of Texas Regional Bank, we see a resurgence of community spirit and pride, and a return to the values that make the Valley great.