In fact, you have to go back more than 40 years to find the last major hurricane, with winds in excess of 111 mph, that hit the region. In September of 1967, Hurricane Beulah gained strength as a Category 5 storm. It weakened to a Category 2 before pounding the Texas coast at the mouth of the Rio Grande with a 20 foot storm surge, resulting in massive flooding throughout South Texas.

Its strength as a Category 2 storm was misleading. Since those days, a growing number of experts have come to believe that there should be more to a storm than just its category designation. The supposedly ‘weaker’ storms that have hit since then read like a recurring battle zone along the coast.

Tropical Storm Alison flooded the Houston area in 2001, causing $9 billion dollars worth of damage in today’s terms. It killed over three dozen people. By all accounts, Tropical Storm Alison was a rainmaker, not even a hurricane, but remains the only retired non-hurricane name to date.

Hurricane Ike had winds equal to a Category 2, but did massive storm surge damage. One of the most infamous storms of all, Hurricane Katrina, was a Category 5, but it decreased to a 3 in terms of wind. That fact did nothing to highlight its surge, which remains one of the worst in U.S. history.

“We are a flood-prone area, and there is nothing that says we can’t have the same disaster here, but if we prepare for it, we can do a lot better job in mitigating that,” says National Weather Service (NWS) Warning Coordination Meteorologist, Barry Goldsmith. “We have to look at it as more than just a category.” 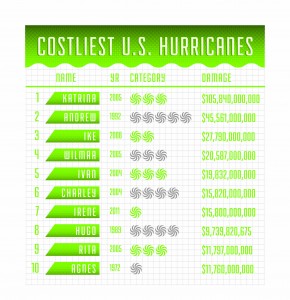 The Category System is Misleading

Goldsmith agrees with a growing number of meteorologists who believe it’s time to move away from the Saffir-Simpson hurricane scale. The five category system describes a hurricane’s strength solely by windspeed and does not transmit information to the public relating to flooding caused by rain or estimates for storm surge.

The tendency by the public is to incorrectly gauge the scale by believing that the weakest category hurricanes are easier to manage from a risk perspective, and that they do not cause as much damage, according to Goldsmith.

“If I had my way, if I were running the show, I would get rid of categories altogether,” Goldsmith said. ” It’s a nice, easy figure, and it worked great for some years, but once we started looking at surge and flood waters, and we got more skilled at forecasting, it doesn’t work as well.”

Hurricane Sandy, without a doubt the deadliest storm of 2012 and second costliest storm in U.S. history, hit the east coast as a Category 1, but resulted in over $53 billion in damages, and it left more than 235 people dead.

People in the path of Hurricane Ike were possibly misled by its Category 2 status when it made landfall in Galveston. The storm flooded inner-city Houston while the sun was still shining, trapping more than 3,000 people, all of which were rescued by the U.S. Coastguard. The storm is the costliest in Texas history, resulting in $37.5 billion in damages. Hurricane Isaac hit Louisiana with an 11-foot storm surge and caused more than $2 billion in damages despite its Category 1 status. 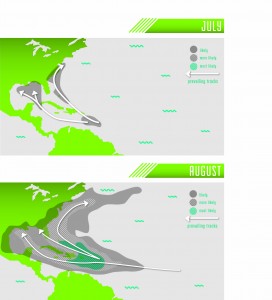 “In the case of Sandy, it was a large Category 1 monster that did not fit that category very well in terms of how you have to consider the impact, which is currently $50 billion and counting,” Goldsmith said. “Only a Category 3? Well, that was Katrina. Katrina was probably the worst surge event in modern times, and that’s not even talking about New Orleans. We are talking about Mississippi, too, and what it did.”

“I can show you a three hour time lapse video that puts water from zero to 15 feet high, or a 30 foot storm surge up to the second floor of a hotel. If that isn’t scary, I don’t know what is. Fifteen feet of water with wave action, and you’re dead. For more than 373 people in Mississippi, that’s exactly what happened,” Goldsmith said.

Proponents of the current Saffir scale essentially say that when addressing the public about a potential major hurricane event, the simpler the message, the better.
In a recent presentation, Goldsmith referenced Bob Stein, a political scientist at Yale University, who has studied the aftermath of Hurricanes Rita and Ike by gauging public perception.

“What we are seeing is some evidence, when you give people a generic notion of risk, that they’re much more compliant, and it makes the task of making a community more prepared easier,” Stein has famously said.

Hurricane experts like Goldsmith are proposing more complex scales for public consumption, which have so far been rejected by the top brass at the National Hurricane Center. After Isaac’s landfall, the NHC released this statement by director Rick Knabb:

“Most, if not all of these, consider the combined effects of hurricane strength and size, or of wind and surge,” Knabb said about the proposed enhanced scales. “However, the National Hurricane Center does not believe that combined or integrated hurricane scales help local emergency managers or members of the public make informed decisions about their particular vulnerabilities.”

Scientists like Goldsmith believe the “Holy Grail” of disseminating information will be getting to the point where a homeowner can go online, enter his home address, and get a readout of the risk of any impending storm hazards at his or her location. This concept has been endorsed by Bill Read, former director of the NHC, who has gone on to say that “forecasting impacts of wind surge and rainfall must be presented in as many formats as necessary to get the word out.”

“That, my friends, is our answer,” Goldsmith said in a recent presentation to emergency management personnel. “It’s not going to be easy getting there, but you know people are working on this angle, and the science is getting better. Scientists will tell you ‘we’re not good enough to do this yet.’ But the public will tell you ‘we want this stuff.’ Bill Read has his eye on the ball. His is the best answer of all.” 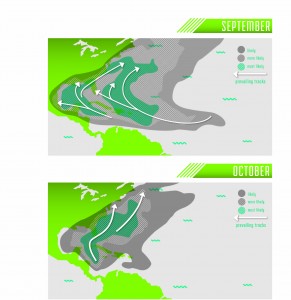 Risk versus Perception: “The Jaws Effect”

In the summer of 1975, the film Jaws opened in theaters, and it had an immediate effect on the general public. The movie, which featured a killer shark terrorizing a tiny seaside community, impacted public perception of the typically docile creatures. Studies showed a marked drop in beach attendance that summer. Fishermen killed thousands of sharks in fishing tournaments, adding to the general fear and paranoia of the time.

Despite the premise of the film, the odds of being bitten by a shark are extremely low, about one in 11.5 million in the U.S., according to the International Shark Attack File.
What sharks and hurricanes have in common is that from a psychological perspective, risk of perception is the biggest hurdle we have to climb, according to Goldsmith, but the proposal of a new hurricane scale is a game changer.

“What do we do when we see a tropical storm that doesn’t have a category with it? We ‘poo-poo’ it,” he says. “But for the people who lived through Hurricane Camille, which was a Category 5, true blue, 200 mph guster, they thought ‘I’m Iron Man. I lived through Camille,’ but they probably died in Katrina, because the surge was so much worse.”

As the first major storm of the 2011 season, Hurricane Irene first hit North Carolina as a Category 1 before hitting the east coast as a tropical storm. The storm resulted in massive flooding when more than 10 rivers reached record heights. The storm caused $15.6 billion in damage and 47 deaths.

“Do you think category matters in this case? No,” Goldsmith said. “Do you think we should look at something else? Yes.”

In the Rio Grande Valley, 80 percent of anything that can happen to your home is due to wind, hurricane, and hail, according to representatives of SafeGuard Insurance Agency.

When Dolly hit in 2008 as a Category 1, insurance adjusters and companies were hit with more than $5 million in claims, according to Abraham Padron, SafeGuard Agency principal in McAllen.

“I know there is something out there saying we should get something in the neighborhood of 20 named storms, which means it’s basically a hurricane. We are hoping we don’t get any. The last one we got here was Dolly back in 2008, and it was a Category 1. That hurricane cost our agency and our carriers we represent about $5 million,” Padron said. “Compare that to Ike, and with the companies we represent, it was somewhere in the neighborhood of $50 million to $60 million. It was huge. Our featured companies, the ones we represent, that’s how much they spent on Ike.”

“Looking at the forecast, it’s important to a lot of the companies we represent. That’s how they make their decisions, whether they are going to stay in the Valley, write business in the Valley, or cut us off,” Padron said. “It matters more to them than it does to us.”

Bill Read, the former hurricane director of the NHC from 2008 to 2012, was particularly fond of saying “no more categories, focus on hazards,” according to Goldsmith.
Public education, however, remains one of the most significant challenges leading to the development of a new system.

“We have to make sure everyone understands why we abolished the scale,” Goldsmith says. “We can’t do that today, because the system and infrastructure we have with weather and information through our partners. We have to be a little cautious,” he said. “I would never throw something out there, where people are so used to it, where it has become common knowledge on every coastal community that you prepare for a category. We can’t just throw it out there right away.”

“We have a long way to go with the development, science, and geographic modeling of it, ” he said. “We need to be a lot better than where we are to say ‘we no longer have to use the category system.’”