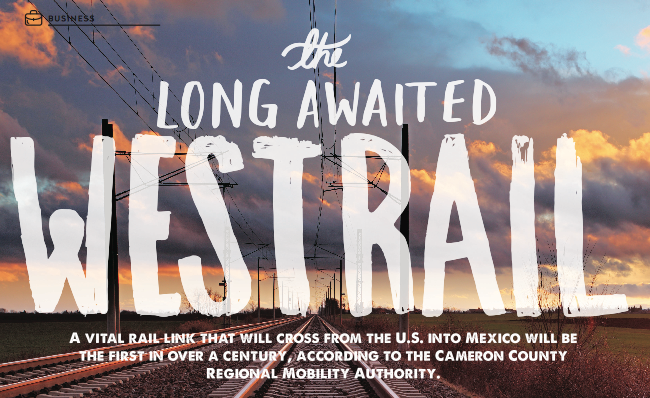 The West Rail will be a vital rail link that will cross from the U.S. into Mexico will be the first in over a century, according to the Cameron County Regional Mobility Authority.

For over a century residents have waited for the main Union Pacific rail line to be relocated, and by May 2015 all construction is scheduled to be complete and train operations will then begin, according to CCRMA.

Developed as a project that “greatly improve” safety and reduction of congestion and traffic-rail delays, the rail line is expected to improve emergency access to West Brownsville and West Matamoros, improve environmental conditions, noise and air quality, and eliminate the potential of derailments within the urban areas.

“The six-mile Project that crosses rural parts of Cameron County in Texas and runs into the state of Tamaulipas in Mexico will be the first across the U.S./Mexico border since the 1900’s,” said CCRMA Executive Director, Pete Sepulveda, Jr.

The West Railroad Relocation Project in Cameron County was developed in concept form between the years 2000 and 2003 in which feasibility studies were developed, and environmental assessments completed with a “Finding of No Significant Impact” issued on June 18, 2004.

This was followed by a presidential permit application submitted to the United States Department of State in June 2003 and the Presidential Permit issued on October 1, 2004.

The project, sponsored by Cameron County, the City of Brownsville and the CCRMA, was proposed as an alternative to constructing a series of grade separations along the existing Union Pacific Railroad route in the residential areas of Brownsville, Texas and Matamoros, Mexico.

In Brownsville, the West Rail Relocation Project is to begin at the UPRR’s junction to the Port of Brownsville and south of Olmito and then continues west and south crossing over U.S. 281, the International Boundary and Water Commission levee and continuing elevated over the Rio Grande River.

Construction funds for the United States portion of the Project have been obtained through multiple agencies including Cameron County, the City of Brownsville, Cameron County Regional Mobility Authority, TxDOT, the U.S. DOT and the Union Pacific Railroad. In Mexico the Federal Government is funding the Project.