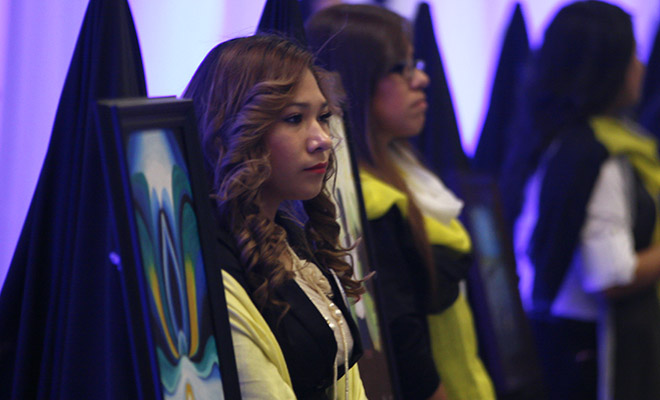 On May 15, the McAllen Conventional Center was transformed into a fine art auction hall.  Potential bidders stood in lines, waiting to pick up auction numbers and assigned tables. When inside the space, people were encouraged to view the works of art that lined the back wall.  There, they would find the accompanying artist.  The work being bid on was not that of professionals, but of IDEA students.

IDEA rose over a quarter million on this year’s Dinner and Auction event, and has raised over a million dollars in its history.

“This is our eighth annual dinner and auction,” said Sam Goessling, IDEA’s chief advancement officer. “The proceeds from the event have historically gone to support students’ field lessons; a lot of students from lower income background don’t get the same opportunities.”

IDEA, in the past, had focused on providing students with the opportunities to be able to visit college campuses.

“We switched the focus for the Dinner and Auction to be more on the college matriculation for our seniors.  All of the proceeds raised from the event went to our Give Me 5 fund for graduating seniors who need some additional support once they’re on [a college] campus,” said Goessling. “A lot of our students receive really impressive financial aid packages, but they still need an extra few thousand dollars to be able to have their university experience.”

This scholarship is flexible and built to fit the need of the individual.  About one in seven IDEA college students will benefit from this form of support.

The Give Me 5 scholarship has been in existence since 2008, and one of its initial beneficiaries, Abigail De Ochoa, now works at IDEA as an advancement coordinator, supporting the generation of graduates.  De Ochoa graduated from IDEA Donna in 2009 and went to Kalamazoo College in Michigan.  After college, De Ochoa was offered a position with IDEA. De Ochoa remembers the scholarship creating a smoother transition to her college experience.

“I promised myself that I would go back and give to the community that gave me so much, which is why I started working with IDEA,” said De Ochoa.  “I know how important that money can be for students, which is why I work hard to make sure we raise as much money as possible.”

This particular scholarship has mostly been funded through automatic deductions from the faculty’s paychecks.  Over 75 percent of IDEA faculty participate, and Give Me 5 has raised more than half a million dollars.