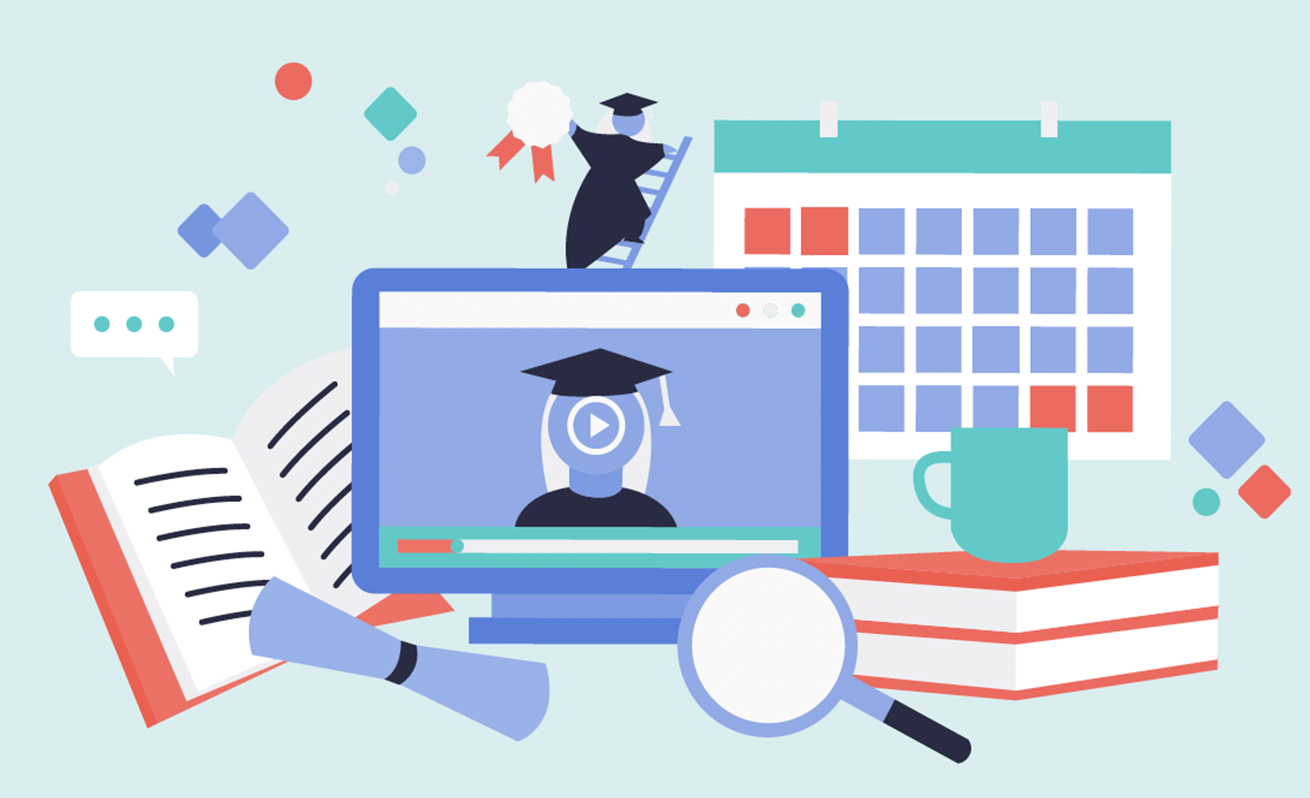 The goal was simple: Create a new college pathway for so-called non-traditional students. And so IDEA Public Schools embarked on their first college adventure over a year ago.

Today that endeavor has paid off for some who once thought it wasn’t in their cards to get a degree.

IDEA-U partnered with New Hampshire University over a year ago to offer college associate and bachelor’s degrees. These are acquired solely online and at the student’s own pace. But students are also required to be advised in person on a weekly basis to make sure they are on track.

Through the partnership, the degree plans are offered with a flat rate tuition of $2,750 per six months, and students can take as many credits as they can handle.

IDEA-U has graduated 25 students so far. And their current cohort includes 158 students at the Weslaco campus, 54 in Brownsville, and about 60 in San Antonio. The goal is to serve a total of 400 students across all three sites by June 30.

Three current students and alumni — Miriam Salazar Balleza, Nicholas Chapa, and Grace Hernandez — are perfect examples of life circumstances getting in the way of higher education.

For all of them, it wasn’t for lack of effort that a college degree wasn’t attained. It was a lack of a pathway that fit their needs.

Take Balleza, for example, who gave the program a new record by finishing her associate degree in three-and-a-half months. She is now pursuing a Bachelor of Arts in communications with a concentration in business through IDEA-U.

“I never thought I would be able to get a degree this fast,” she said. “I didn’t think I would get this much support. … It’s just amazing what this program did for me, to be honest.”

Balleza graduated high school early. But rather than being able to quickly move on to college, she had to work full time to help support her family after her father was picked up by U.S. Immigration and Customs Enforcement.

Her father was a resident and would later get released, but Balleza faced another hurdle: financial aid.

Balleza, 24, is a DACA recipient — Deferred Action for Childhood Arrivals. While that permit is meant to allow her to work and study in the country without fear of deportation, it doesn’t mean she enjoys the same financial aid or grant opportunities as U.S. residents or citizens.

So she kept her full-time job and only took a few classes at a time at a traditional college.

There was no time frame to finish, no set goal for Balleza, who said she played it by ear. But one day, her mother told her about this new program she heard about where DACA students could get a full scholarship.

“I thought, ‘no, there’s always a catch,’” she said. “But I went and that’s when I spoke with (advisers) who said it is absolutely free for DACA students, so that immediately caught me.”

And it was true — IDEA-U received a grant in 2018 to provide full tuition to DREAMers. And Balleza is now planning to finish her bachelor’s degree in one year.

Her classmate, Nicholas Chapa, 28, also put his education on hold after becoming a father at a young age. At that point, he had to prioritize work to support his family.

“I had tried to go to college right after high school — I went to then-UTPA (University of Texas-Pan American) for a couple of years — but I had a son in the meantime and dropped out,” Chapa said. “A few years later, I tried to go back to school and it just didn’t work out.”

For him it was more about scheduling issues. Juggling a full-time job, family, and school wasn’t easy, especially when trying to select courses at a traditional university. There also wasn’t much help he could get to find better options.

“I basically (had) no guidance before. But here I feel like they are always here to help,” he said. “We have to meet with (advisers) weekly, whether you want to or not, and they are with you as you go through the program.”

Chapa finished his associate degree in nine-and-a-half months through IDEA-U, and is now pursuing a Bachelor of Arts in Management with a concentration in public administration.

The constant guidance gives him the tools needed to not only get these degrees, he said, but to see past it. Chapa is now planning to continue studying to pursue a master’s degree in computer science. 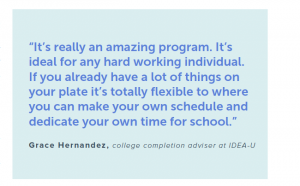 Perhaps one of the reasons why those advisers work hard to encourage students is because some of them have been in their shoes.

Grace Hernandez is currently a college completion adviser at IDEA-U, but her vast resume also includes working as a co-teacher at IDEA Mission, and eight years in law enforcement with the city of Mission as a dispatcher, police officer, and criminal investigator.

Hernandez, 41, was part of the first cohort of IDEA-U graduates. Her calling to go back to school came when she decided to make a career change in order to have a stable schedule for her and her family.

“Being in law enforcement is great work, but it’s long hours being away from your family,” she said. “So I found a way to still serve, but spend a lot of time with my family.”

She changed paths to education, and while working as a co-teacher she was made aware of a full teaching opening that would require her to get a degree in education.

That’s when she heard about IDEA-U. At that point she already had the equivalent of an associate degree and the flexibility of the program worked for her already busy schedule.

“I felt like it was the opportunity of a lifetime and I needed to be a part of it,” Hernandez said. “So I did.”

Hernandez received a bachelor’s degree in management with a concentration in public administration in one year, jumped on board as an adviser, and is now planning to seek a master’s degree through Our Lady of the Lake University in the fall.

Now Hernandez mentors 40 students. And it helps, she said, that she can speak from experience and better understand the stages the students go through.

“It’s really different from other college paths,” she said. “It’s really an amazing program. It’s ideal for any hardworking individual. If you already have a lot of things on your plate, it’s totally flexible to where you can make your own schedule and dedicate your own time for school.”