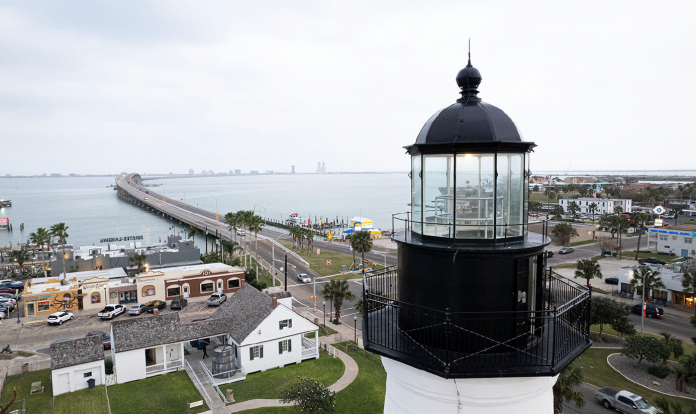 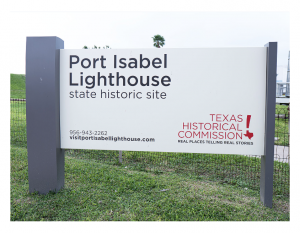 Over 176 years ago, sea captains looking for a safe haven to land their ships along the South Texas coast would be welcomed by nothing more than a natural bluff that rose 25 feet from Laguna Madre. The now busy shorelines of South Padre Island and Port Isabel were unremarkable back then — just a flat line of land extending continuously to the west. That was until 1853, when a beacon of light stretched from the coast of Port Isabel, then called Point Isabel, 16 miles out to sea, welcoming those to shore for a safe landing: the Port Isabel Lighthouse.

Today, the lighthouse is a designated Texas Historical Commission State Historic Site and a major tourist destination, wedding venue, market days location, family-friendly cinema site, and educational tool for youth. But this was not always the case.

In 1850, the 50-foot brick lighthouse was commissioned for $15,000 by the U.S. government at the site of Fort Polk, which was used by U.S. Gen. Zachary Taylor and his soldiers during the Mexican-American War (1846-1848). Although the fort was evacuated by this time, Fort Polk continued to be used by the U.S. Treasury Department, so a lighthouse was needed to safely bring in ships through the Brazos Santiago Pass.

By April 20, 1853, at what was once the site of the interior of the main earthen bastion of Fort Polk, now stood the Point Isabel Lighthouse, along with the beacon at Brazos Santiago on South Padre Island, a black, square wooden tower. During the lighthouse’s 40 years of on-and-off service, it endured the Civil War, countless harsh weather conditions, and the introduction of the railroad to South Texas. As the railroads began to play a bigger role in the import and export of supplies to the area, there was little need for a lighthouse, ultimately leading to its decommission in 1905.

Valerie Bates, marketing director for the City of Port Isabel, has been the site manager for the Port Isabel State Historic Site since 2019, when the lighthouse was transferred from the Texas Parks and Wildlife department to the Texas Historical Commission. Bates explained that the lighthouse plays an important role in the city’s economic growth.

“(The lighthouse) is absolutely (the city’s) identity, our brand,” she said. “It’s on the city logo. It’s virtually on everything that the city of Port Isabel represents. Historically, it’s created job creation and retention. It affects all the businesses around the area. It increases the quality of life for a business owner who comes into town, opens a business, and lives here. The ripple effects of the lighthouse are really pretty endless in our small town. It’s not just a tourist attraction for me.” 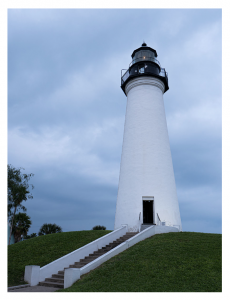 By the late 1920s, the small fishing village of Point Isabel continued to be bypassed as a tourist destination in comparison to the newly developed South Padre Island, which was reachable by ferry. In 1928, the city had a goal to attract more visitors to the area, and decided to rename the city Port Isabel and reopen the lighthouse to the general public. However, after a devastating hurricane hit the area, much of Port Isabel went underwater, disrupting the town’s development projects.

The lighthouse was padlocked and left to the elements until 1952, when the Texas Parks and Wildlife repaired, improved, and staffed the site through a historic program. On April 26, 1952, the new tourism beacon became a state park and an unofficial private aid to navigation. Later, the visitors center was built using the blueprint plans of the original lighthouse keeper’s cottage.

“(The lighthouse) is about history,” Bates said. “It’s also about experiencing something unusual or exciting. You see a family of four and that none of them have been there before. And they’re all experiencing it for the first time through their own eyes.”

Families can make memories while climbing to the top of the lighthouse, exploring the view from the catwalk, and enjoying the breeze.

“And then, every time you pass that lighthouse, there’s that conversation in the car, ‘Remember when we were there?’” Bates said. “That has its value.”

During the pandemic, the lighthouse was not able to welcome visitors the way it had in the past and remained open sporadically throughout much of 2020 and early 2021. Finally, on May 28, 2021, the lighthouse opened its doors full time to the public to once again enjoy its rich history and breathtaking view. To date, the lighthouse has welcomed 32,796 visitors since reopening.

Bates added that the lighthouse will soon be available to experience in a virtual setting through an app developed by the Texas Historical Commission. The goal is to build virtual field trips for each of the 32 state historic sites so students can travel to a desired location without leaving the classroom.

This spring, a new feature will be added to the lighthouse: a Fresnel lens, a composite compact lens developed by French physicist Augustin-Jean Fresnel. The lighthouse was installed with such a lens in 1888, which was then removed when decommissioned in 1905. Currently, the lighthouse holds a mercury-vapor light. 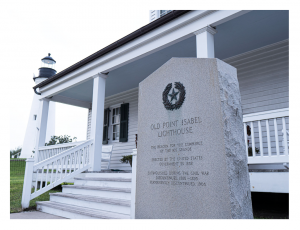