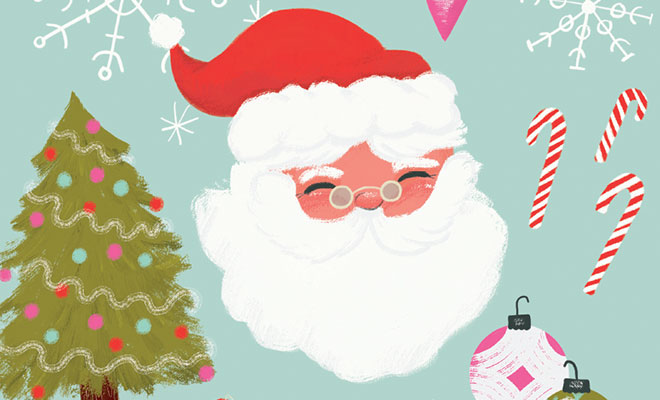 The time a young Gary Della Croce met Santa Claus is something of a family legend.

“I grew up in McAllen,” said Della Croce, now 70. “This was like in the late ’50s. There was a guy in town — he had a three-wheeled motorcycle and a big white beard, and everybody called him Santa Claus.”

At that point, Della Croce was old enough to know the truth behind the holiday icon, but his sister was still a young believer. Their father told them Santa was coming to their house that night — and the man with the three-wheeled motorcycle delivered. The experience dazzled the siblings.

“I didn’t find out until years later when I asked my mother, ‘how’d you get Santa Claus to come?’” Della Croce remembered. “She said, ‘He was arrested and Daddy went and bailed him out. So he owed him a favor.’”

Della Croce and one of his daughters, Gwyn Zubia, laughed heartily.

“So I heard the first part of the story growing up: ‘We saw Santa Claus,’” said Zubia, who is the content manager for RGVision Magazine. “And then when I grow up, I find out, oh, it’s because he was arrested for intoxication.”

That early experience with Santa Claus — no matter his reason for appearing — could have foreshadowed Della Croce’s current close relationship with Father Christmas. 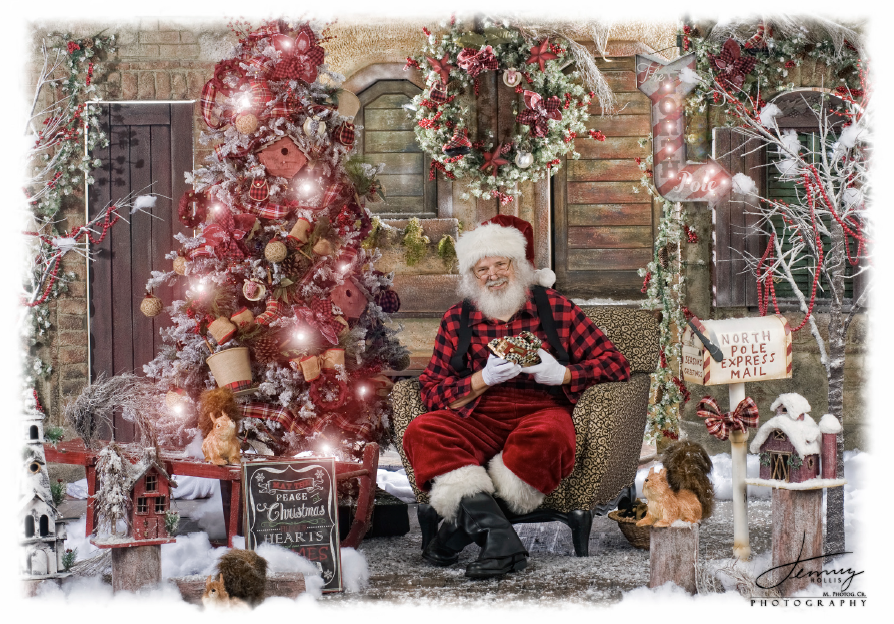 Because for two months out of the year — and sometimes beyond — Della Croce dons the famous red suit and becomes Santa.

It all started six years ago when his wife, Ann, worked at Jenny Hollis Photography Studio in Mission. The studio hosts holiday photoshoots, and Christmas is no exception. The studio had someone to play Santa for the photos, and he’d stepped out when Della Croce walked in.

“There was a young lady, maybe sixth-grader, fifth-grader in the hallway,” Della Croce said. “She turned around and looked at me and goes, ‘you’re Santa Claus, right?’ I had a goatee. I didn’t have a beard. It just kind of struck me. I said, ‘no, I’m not, but I think he’s just right outside.’”

The following year, the photography studio hired the same man to play Santa, but he left the position abruptly.

“So my wife calls me and says, ‘we need you to come here and be Santa Claus,’” Della Croce recalled. “And I said, ‘well, how soon?’”

He used a beard and hat that the studio had on hand, and his wife and mother-in-law quickly sewed the rest of the costume to fit his 6-foot-6-inch frame.

“The kids, the older ones — ‘you’re not really Santa because of your beard,’” Della Croce said, miming pulling on his now-full beard. His response to his earliest critics? “You know, I’m not, you’re right, but this is what we’ve got today.”

Which leads to Della Croce’s first piece of advice for anyone looking to fill in as the jolly old elf.

“You gotta grow a beard,” he said. “The fake ones really don’t cut it.”

To this day, Della Croce works with Jenny Hollis Photography for the holidays — all based on the first hurried experience of filling in for Saint Nick and interacting with the children.

“I thoroughly enjoyed it,” he said. “It was really special to do that stuff.”

Della Croce committed to the role, trading up his stop-gap costume for a professional model.

“I ordered my suit from Santa Suit Express dot com,” he said.

The website offers a variety of Santa suits — from a velour set to an outfit branded as “Regency Plush.”

“The suit is so wonderful but it’s so heavy,” Della Croce said. “It’s so hot.”

It also helps him get in the right mindset to be Santa.

For Della Croce, the Santa season generally starts the first weekend in November, when he participates in the photoshoots. School, nonprofit, and office events usually begin in the first part of December. All this takes part during the most hectic portion of Della Croce’s day job as a life and health insurance agent — Medicare’s annual enrollment period, which lasts from the middle of October until Dec. 7.

“That’s my busy time, but I still manage to work out whatever ones get worked in,” he said. “I haven’t turned anybody down.”

And as for anyone who’s interested in booking Della Croce for a holiday event?

“They need to talk with my manager,” he said, referring to his wife and laughing at the suggestion that she might be Mrs. Claus. “I can’t get her in a suit, but she would be a great one.”

When they’re not attending official Santa events, they both enjoy surprising people during unofficial appearances.

“We do drop-in stuff sometimes — my wife goes with me,” Della Croce said. “We’ll go to whatever the event or party is and on the way back, we’ll stop in at Starbucks and stuff like that.”

Selfie requests are always a given. But sometimes, Della Croce experiences deeper interactions.

“This one particular time we were in Starbucks,” he said. “It was in the evening, during finals.” He asked the students he was taking selfies with what they were doing there. “And it’s, ‘well, we’re studying for finals.’ And I said, ‘can I pray for you all?’ Everybody that I talked to said yes. So that’s the kind of opportunities that are most meaningful to me — just to support kids.”

For Della Croce, being Santa isn’t just a side gig. 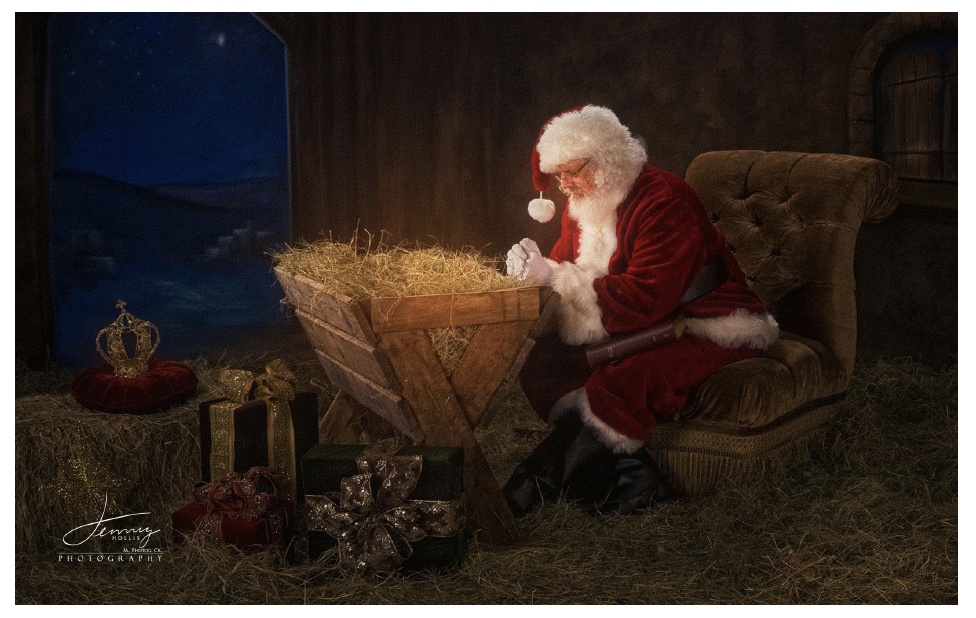 “I have to be very responsible,” he said. “It’s not something to take lightly. It’s not about me. I’ve just been so blessed.”

Della Croce recounted being Santa for a group of about 50 Ugandan children who were in the Rio Grande Valley as a part of a choir trip. He found it particularly touching when he discovered the children called Santa “father” and “uncle.”

But perhaps Della Croce’s most meaningful experience happened as a part of McAllen’s annual Christmas posada held in Archer Park.

“When you do a photoshoot at a studio, you ask kids, ‘what do you really want? What’s the number one thing on your list?’” he said. “And they’ll say whatever the latest iPad or iPhone. I learn what’s the hot stuff for that season because kids know it.”

Filling in for a Winter Texan who hadn’t returned that year to play Santa, Della Croce’s posada interaction with one child was different from the norm.

“So many times I’ve said, ‘what do you want for Christmas?’” he said, becoming emotional as he remembered the exchange. “This one said, ‘I’d like to have my mommy and daddy … mommy and daddy back together.’ It just opened my eyes to what all kids go through.”

Some critics decrying holiday commercialism often put Santa squarely in the crosshairs. But for Della Croce, Kris Kringle’s role is more important than that.

“My role is all about Jesus,” he said. “Sometimes I have the opportunity to pray with the child, other times just to hold them, just to be close with them, it’s really fulfilling. I’m just there to be a part of what is a traditional holiday season, and I thoroughly enjoy it.”

Outside of the holiday season, people often still recognize Della Croce as Santa. One such interaction happened at a dealership while he was getting the oil change in his car. Another man with a full, white beard walked in — and made a beeline to Della Croce.

The other Santa revealed to Della Croce that every year, he’s flown to New York, put up in a hotel, and earns a paycheck in the tens of thousands of dollars for donning the holiday role for six weeks.

“If this angel Santa ever comes back into my life, I gotta find some more information because I would gladly do that,” Della Croce said, chuckling. “But I thought that was interesting that we kind of had an attraction to each other, in that case.”

“Takes one to know one,” Zubia joked.

Though one can make money from doing it, being Santa isn’t really about that for Della Croce. It’s the spirit of Christmas — and Santa — that he embodies.

“No matter what age you are, Santa Claus, it brings you back to a place where there’s joy in your life,” Della Croce said. “It brings back — I hope for most people — good memories.”

Zubia, one of five children, compares the experience of having a father who plays Santa to having a celebrity father — but without the drama.

“I think he has the perfect personality to do it,” she said. “He genuinely cares and I think that makes a difference.”

When she gets the opportunity to see Della Croce interact with children, his affinity for the role shines.

“I’m just secretly bawling in the corner — the way kids look at him and talk to him,” she said. “I think it doesn’t matter their age — everyone is excited to see Santa. They see him coming in a suit and it just kind of makes you want to believe in magic again. It’s really exciting.”

Really exciting for most people, anyway.

“My grandkids, they’re not impressed at all,” Della Croce said, laughing.