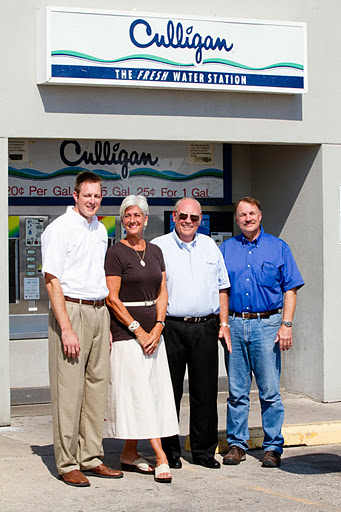 The Stensengs: All in the Family Culligan Business 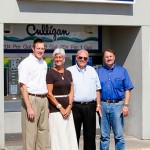 Winslow and Susan Stenseng set out on a life-changing road trip from Stillwater, Minnesota, to deep South Texas 36 years ago.  Their northern roots took hold here as they purchased a Culligan dealership and franchise in San Benito, starting Culligan Water of the Rio Grande Valley together on January 1, 1975.  The rich Culligan history continues to flow down through the generations of this dynamic family.

Culligan International celebrates its 75th anniversary this year as the premier residential and commercial water treatment company, with franchises in over 90 countries and over 700 independent dealers in North America alone.  Culligan first came to the Valley in 1945, and a few additional franchises were added through 1958.  In 1968, Win’s uncle, Col. B. E. Hanson, bought and consolidated the franchises already in place in Harlingen, Brownsville, and San Benito into one Cameron County franchise.  Col. Hanson was a commanding officer at the Harlingen Air Force Base in the 1960s.  Though he was from Minnesota near the Canadian border, he and his wife considered the Valley home and intended to retire here.  After five years with their Culligan business, full retirement was in Hanson’s sites.

Meanwhile, his nephew, Win, graduated from St. Olaf College in Northfield, Minnesota, with a Bachelor’s degree in Economics and Psychology and was working in Minnesota for a manufacturing company.  He subscribed to his dad’s hard work ethic and philosophy of “being your own boss,” and he was intrigued with the thought of running his own business.  Win and his uncle worked out a deal for the Culligan dealership, and soon Win and his new bride, Susan, were headed south to turn the page on their next chapter in business and in life.  Susan had earned a Master’s degree in French from the University of Minnesota, but she found French was not being taught in the Valley.  She started working with Win, and their team of a handful of employees took to running their operation through hard work and no fear of what was to come. 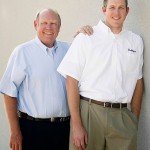 In 1978, the Stensengs purchased the Weslaco Culligan franchise, which was also the first water vending business in the Valley.  In 1980, Win’s brother, Vern Stenseng, moved from Minnesota to Harlingen, and the families started a joint venture in water vending machines.  The water vending business has continued through to the present, with Culligan having 15 locations throughout the Valley today.  The brothers’ partnership, Stenseng Distributing, now is a wholesale distributor for Dow Chemical Company and its subsidiary, FilmTec, which produces reverse osmosis, or RO, membranes.  In 1985, Win and Susan built what stands today as their office building in San Benito and continued with their property expansion.  In 1990, the Stensengs began their own bottled water business after constructing a bottling plant.  Culligan delivers bottled water throughout the Rio Grande Valley, but bottle-free coolers are continuing to become a larger part of their commercial business.  The business has grown tremendously since 1975, and their employee count of 35 is a representation of the strong, dedicated team they have put together over the years.

“Ultimately, we deal with ‘the customer’s point of use’ in our business.  Our philosophy is to provide the right type of water with the best quality for each point of use,” Stenseng states. 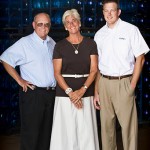 Stenseng explained that 99% of the water each municipality produces is not used for drinking, when you factor in the water usage for watering lawns, washing cars, doing laundry, and running water through household plumbing.  With this in mind, it makes no economical or common sense for cities to produce all of their water up to pure drinking water quality.  This is where reverse osmosis (RO) systems come into the picture.

RO systems mounted under the kitchen sink will deliver high quality, clean drinking water right to the tap and can reduce a wide variety of water contaminants.   These ultra-convenient systems can also save customers money compared with buying bottled water in the store.  Besides using the water for drinking, RO water is also great to use for cooking, watering pets, watering plants, and filling steam irons, as well as being run to the water line for your ice maker. 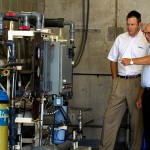 Another key product that Culligan offers is the water softener, which removes calcium and magnesium from the water, and thus produces soft water.  Soft water has multiple benefits, such as increasing the life of your pipes, water heater, and dishwasher, lowering the production of soap scum on your bathroom surfaces, and decreasing the amount of chemically-laden soaps and detergents you would have to use for cleaning.  A staggering 70 to 80% of the composition of detergents are chemical water softeners added to counteract the effects of hard water.  The detergents combined with hard water cause residue buildup on glasses, dishes, washing machines, and surfaces.  The use of a water softener in a home or business can take these issues out of the equation.

Though the core of Culligan’s business is residentially based, they are also experts in commercial and industrial water treatment.  They have many customers in the restaurant and hotel industries in the Rio Grande Valley and provide ultra pure water for labs in hospitals, dialysis centers, and industrial processing plants.  A strong point of Culligan’s diversity is it sells, rents, and fully services all of the equipment for its residential and commercial customer base, making the company a leader in every aspect of water treatment.  They are especially proud of the service they provide to customers and their equipment, and they have a service technician “on call” 24 hours a day. 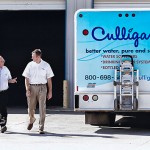 Culligan Water of the Rio Grande Valley is one of the original members of the Texas Water Quality Association, of which Win Stenseng has been president twice.  Culligan is also a member of the national Water Quality Association, and the International Bottled Water Association.  Stenseng is active in supporting the Culligan dealer network and has been involved with the Culligan Dealer Advisory Council, where he has served as president, as well as serving on the board of directors for the Culligan Dealers Association of North America, Allied Purchasing Corporation, the Valley Chamber of Commerce, and the San Benito Chamber of Commerce.

When asked about the future of Culligan, Win grins and looks across his desk at his son, Tyler.  Tyler has just returned to the Valley from working in the Midwest for the past 3 years.  Prior to this, he earned his Bachelor’s degree in Sociology with a minor in Management Studies from St. Olaf College and his Master’s degree in Business Administration from the University of Texas at Brownsville.  The Stensengs are happy to have Tyler back in the Valley and will proudly see him take over as General Manager when they are ready to retire.  Keeping the family business in the family is significant for all of them. 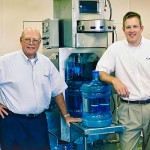 “I want to bring the knowledge that I’ve gained through my prior work experiences and infuse the business with my skill-set to make continuous improvements operationally,” Tyler acknowledges.

As technology continues to change over time, Culligan fully intends to keep pace, continuing with their main differentiator and key to success, which is servicing what they sell.  Providing high quality products and focusing on top notch customer service has been key in retaining their long term customers.  With that same spirit, the Stensengs plan to keep it all in the family Culligan business.