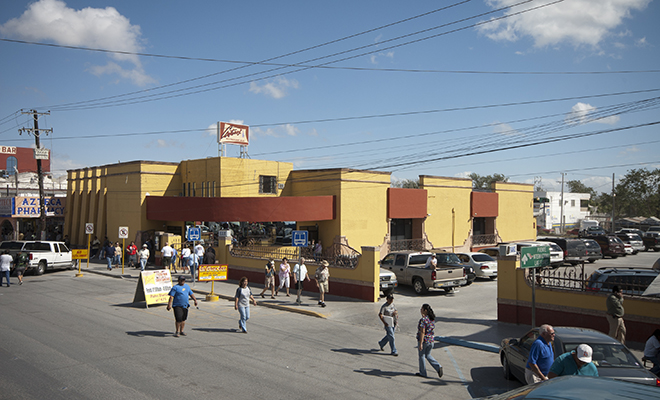 Running a Mexican restaurant in South Texas isn’t for the faint of heart. In the Rio Grande Valley, where fajitas are found at every corner, only the stronger Hispanic roots survive.

That seems to be the case with Arturo’s Bar and Grill, a successful arm of its original in Nuevo Progreso, Mexico. “We’re not a restaurant that’s just started,” the owner Gilberto Garza shares. His family’s over thirty years of experience in the food industry equipped him with wisdom that few have when starting a business. “Some ask why we didn’t go to McAllen,” he mentions the blooming city. “But being here allows us to have costumers from all over the Rio Grande Valley.”

Garza is happy to inspire growth in the place where he grew up —Weslaco. With Arturo’s arrival, other businesses couldn’t help but notice the region’s potential. “Now we have an Applebee’s and Chick-fill-A. “And we’re still busy.” Garza notes.

Arturo’s Bar and Grill success in only a year in its new location doesn’t surprise him. To Garza, the amount of costumers faithful to the original in Nuevo Progreso was mind-boggling. That consistent traffic only slowed down with factors that were out of their control. “The violence in Mexico attributed to many people not crossing the border,” Garza explains. “So if people wouldn’t come to Mexico, we decided to take Mexico to them.”

Becoming the sole proprietor of Arturo’s in Weslaco goes beyond the dreams of this young restaurateur. “Working in Nuevo Progreso, my vision was always to take over after my dad,” Garza recalls. “I’d never thought of going to the States, because we already had such a great business.” The challenge has yet to be a disappointed his Fathers legacy.

The former psychology major found himself engaged to the Arturo’s high customer service standards. “After helping my dad one summer, I fell in love,” Garza explains the reason for leaving St. Mary’s in San Antonio after the second year. “You interact with people all day long,” he highlights his favorite aspect of the job. “I’ve made a lot of friends through the restaurant.”

Proud of his awareness of the clients’ perspective, Garza makes sure Arturo’s is a place his family would frequent. “We know how we would like to be treated, and how we would like the food to come out,” he elaborates. With that in mind, Garza is disciplined about anything that enters his kitchen. “I always check the produce, meats and seafood that arrives” he assures. “We only buy the best quality, instead of the cheapest.”

Garza believes his hand-on approach is the recipe for Arturo’s Bar and Grill satisfied customers. “There are very few businesses that the actual owner is there,” he points out. “I’ll check on tables and sometimes wait on them if I see that my staff is very busy.” Having learned from his tight-knit family the importance of maintaining relationships, Garza also values his employees. “Ninety percent of them have been with me since I opened six years ago,” he mentions Arturo’s Bar and Grill first Weslaco location. “In Nuevo Progreso, our team has been the same for over thirty years.”

In the future, Garza plans to include catering into the restaurant’s varied menu. “We offer cabrito, lobster, shrimp, tacos, chalupas, vegetarian choices, and a whole lot more ” he adds. But for the time being, Garza is excited to serve the area in their versatile new location. “Now that we’re off the expressway, we’re able to offer better parking, full bar with live music Thursday thru Saturday and a large room for private parties.”

According to him, this growth is a direct consequence from their commitment to its Nuevo Progreso original. Even among franchise giants, Arturo’s Bar and Grill focus remains to serving meals that taste both authentic and fresh.