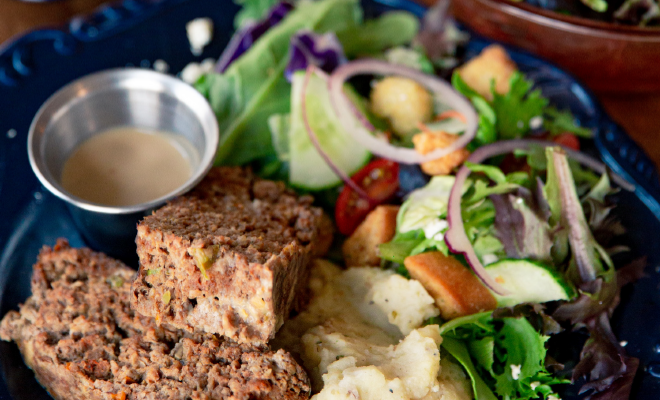 The Tea Room, otherwise known by locals as “the little white house on the corner,” has served the community for nearly 20 years. The vintage-themed restaurant specializes in fresh sandwiches, soups, salads, teas, and daily hot food specials. Owners Michael Mendiola and Diana Gonzalez took over the business in July 2018. Since then, they have developed a keen passion for business, food, and people.

Amid the COVID-19 pandemic, Mendiola and Gonzalez felt the urgency to do their part in giving back to the people of the Rio Grande Valley.

“Diana and myself decided that we were going to help our community any way we could, especially our elderly community,” Mendiola said, shortly after the shelter-at-home order was announced in March.

Mendiola and Gonzalez moved fast. In a few days, they were able to put together 40 weekly care packages. These care packages consisted of one week’s supply of toilet paper, water, and food for a single person. Upon asking their Facebook following to message them with names and addresses of anybody in need of one, the number of responses was unbelievable.

“We had an overwhelming response to people in our neighborhood who needed care packages, food, etc. This is when we realized that this was going to take a lot more effort than we thought,” Mendiola said.

Although they had a strong desire to meet these responses with immediate action, The Tea Room’s sales dropped nearly 50 percent after the shelter-at-home order. This made Mendiola and Gonzalez get creative. After some thought, the idea of “Friends Helping Friends” was born.

The benefit first worked as a buy-one, get-one deal, so for each person who purchased a meal at The Tea Room, another meal was donated to those in need. After donating over 1,000 meals, Mendiola and Gonzalez saw the opportunity for more to be done.

The benefit was then expanded to be a drive-thru food giveaway to occur on May 2.

“We decided that we were going to give a family meal pack of up to four meals for each car that drove,” Mendiola said. “The giveaway meals consisted of four of their in-house prepared chicken salad sandwiches, four bags of chips, and four drinks. We had a line of cars for at least two-and-a-half, three hours come by The Tea Room. Ultimately, we were able to give away 750 meals that day.”

Although this event was a huge success, Gonzalez and Mendiola have since struggled to maintain enough sales to keep the eatery afloat. Their persistence to adapt has forced them to think of unique ways to bring in more business. They believe that their vintage decor, savory signature chicken salad, butterfly peach tea, and modifications to their restaurant might just be enough to keep them open for years to come.

If you’d like to support and visit The Tea Room, you can find them at 1524 N. Conway Ave., in Mission. Their hours of operation are from 11 a.m. to 4 p.m. Monday through Saturday.

Have you tried The Tea Room recently? #JoinTheConversation at facebook.com/rgvisionmagazine.