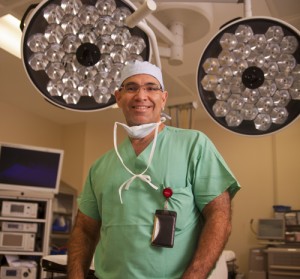 Preeminent neurosurgeon, Jose Dones-Vasquez MD, is at the forefront of a ground- breaking procedure that is changing the lives for longtime sufferers of Parkinson’s Disease, as well other movement-related disorders in the Rio Grande Valley. Making his debut in the Upper Valley area, he has spent the last 10 years operating a practice in Harlingen, Dr. Dones has now begun treating patients at Edinburg Regional Medical Center, which is on pace to establish itself as the premier location in the region for neurosurgical care. The doctor’s expertise involves providing care for problems involving matters
of the brain, spine, and peripheral nerves. His work extends to the treatment of disc herniations, arthritic treatment, brain tumors, Parkinson’s disease and vascular problems. All of these are made possible following a significant investment by ad- ministrators at Edinburg Regional.
By bringing in some of the foremost experts in neurosurgery, including Dr. Dones, administrators say they have injected at least $.5 million in equipment and staff to brand Edinburg Regional Medical Center as the premier location in the Upper Valley for neurosurgical care. Edinburg Regional is a South Texas Health System facility. South Texas Health System is the Valley’s largest healthcare provider, and its other facilities include McAllen Medical Center, McAllen Heart Hospital, Edinburg Children’s Hos- pital, Cornerstone Regional Hospital, and South Texas Behavioral Health Center.
“The most important thing is that certainly, the hospital did recognize that there was a need for this kind of therapy in the Valley. We had been doing this for quite a few years already elsewhere, but here at Edinburg Regional, it was the only hospital that really put every- thing together for us to start doing this kind of treatment,” Dr. Dones said.
Specifically, Dr. Dones is speaking about the hospital’s decision to offer Medtronic Deep Brain Stimulation (DBS) Therapy. DBS is an innovative treatment for cer- tain neurological conditions, as well as a potential alternative to medication. The treatment includes a surgically implanted medical device, similar to a cardiac pace- maker and sometimes referred to as a “brain pacemaker,” to deliver carefully controlled electrical stimulation to precisely targeted areas within the brain involved in motor control and muscle functions.
Stimulation of these areas interrupts the brain signals that cause the motor symp- toms associated with the three most com- mon movement disorders – Parkinson’s disease, Essential Tremor and Dystonia, Dr. Dones says. The stimulation can be programmed and adjusted non-invasively by a trained physician to maximize symp- tom control and minimize side effects.
The Medtronic Activa DBS System includes:
DBSLead–ADBSleadisathin, insulated, coiled wire with four elec- trodes at the tip that is implanted in the brain; the electrodes are positioned in the target site for stimulation.
Neurostimulator — A neurostimulator is a small, sealed device that contains a battery and electronics; it is implanted beneath the skin in the chest and pro- duces the electrical pulses emitted through one or more of the electrodes.
Extension – Like the lead, an extension is a thin, insulated, coiled wire; passed under the skin of the head and neck, it connects to the lead at the top of the skull and to the neurostimulator in the chest.
The surgery to implant the device takes several hours and is divided into two parts: the procedure to implant the lead(s); and the procedure to implant the
neurostimulator(s) and extension(s). The duration of each procedure and the specific steps involved vary by patient and neurosurgeon. Some neurosur- geons complete both procedures during a single surgery; others complete each procedure in separate surgeries.
In one recent Parkinson’s disease clinical study conducted by Medtronic, manufacturer of the devices, 87 percent of DBS therapy patients demonstrated improved motor scores – even while off their regular medications – at the end of a 12-month evaluation period.
“For all patients, especially those with Parkinson’s, they regain more control in their lives,” Dr. Dones said. “Some still take medication, but they feel more in control, and have less tremors . They also feel more at ease to move around. After several years, they rush to replace the batteries because they know what life is like without it.”
A graduate of Universidad Central del Caribe Medical School in Puerto Rico, where he graduated Summa Cum Laude in 1995, Dr. Dones is also the for- mer Chief Resident at Medical Sciences Campus in San Juan, Puerto Rico.
The doctor also draws on his military experience. He spent four months, from Aug 2007 to Nov. 2007, as Major Neu- rosurgeon at Balad Airforce during Op- eration Iraqi Freedom. He also served in the Puerto Rico Army National Guard from Oct. 1992 to July 1998. Prior, he served in the United States Naval Re- serve from July 1986 to Sept. 1992.
“The difference with neurosurgeons is that the process to become one is inten- sive. Number one, it’s a long residency program and it trains you to not only deal with the adult population, but pedi- atrics and all the things we do regarding brain injury, trauma, tumors, aneurysms or movement disorders,” Dr. Dones said. “This also includes pediatric epilepsy, back and spine surgery. Certainly, we take care of patients who are very delicate.
Obviously, once you sustain a trauma our goal, as much as possible, is to try to mini- mize any further injury to the brain or the nerve. Most of the time, we continue seeing these patients because they need other ther- apies in order to continue getting better,” Dr. Dones said. It feels great. You’re doing something to certainly help the patient. It’s not cosmetic. It’s something to really help the patient regain their lives.”