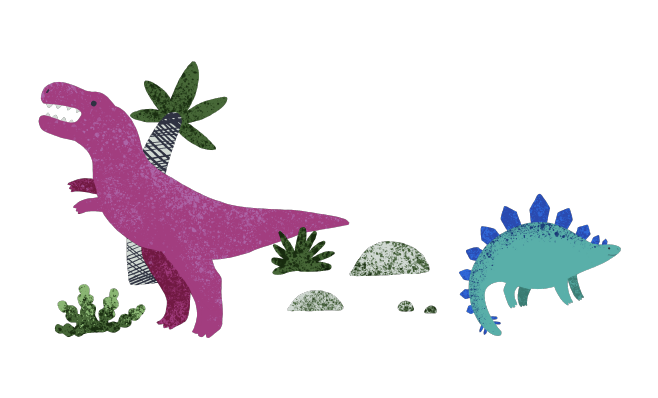 It’s a national holiday so big that it’s celebrated twice over the summer — on May 15 and June 1 — revolving around a group of animals that continues to capture the imagination despite dying millions of years ago.

And in honor of this holiday, the Museum of South Texas History in Edinburg will celebrate National Dinosaur Day with an exhibit and an activity that invites the public to participate.

“We were thinking of doing coloring pages and re-releasing some of our activity videos that are history based,” said Anna Garrigos, the museum’s community engagement specialist. “That way they’ll have a bit of a backstory talking about history, dinosaurs, fossils, stratigraphy — anything encouraging them to look into the field of natural science like archeology and paleontology.” 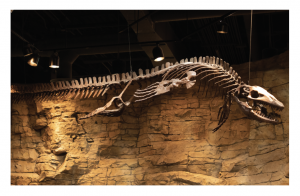 Activities involve a series of downloadable coloring pages for people to color — collaborations with local artists will be included, according to Garrigos. Kids will also get to perform activities to learn about stratigraphy — the study of rock layers — via pudding cups.

“People are still looking for more information and knowledge and we’re trying our best to present that,” Garrigos said.

MOSTHistory is home to two prehistoric fossils: a Columbian mammoth and a mosasaur. According to the museum’s exhibits coordinator, Melissa Pena, the museum hopes to highlight the history of the area with their upcoming dinosaur day exhibit.

“We started looking into excavations done in Mexico and Central, Northern Texas to get a better idea of what may have been in our area,” Pena said. “We’re working toward expanding our exhibits based on excavations around us while also trying to collect from our area.”

“Everyone loves a dinosaur — the imagination takes over when we think of them,” Pena said. “We all were that 7-year-old who loved dinosaurs and had plastic T-Rexes we played in the dirt with. It’s such a play on the imagination when we think how there once was something that huge that roamed the Earth. I think dinosaurs are our childhood. We all want to relive that.”

According to Zachary Riggs, a park ranger at Dinosaur Valley State Park in Somerville, Texas, there have been two confirmed dinosaur species whose fossils have been found in Texas. They belong to an Acrocanthosaurs — a theropod, or three-toed meat-eating dinosaur — that once inhabited at least parts of what’s now North America during the early Cretaceous period roughly 125 million years ago. Most Acrocanthosaurus fossils have been found in Texas, Oklahoma, and Wyoming.

The bipedal dinosaur also left its mark through South and Central Texas, stomping up and down what’s now Interstate 35 from Laredo to Dallas-Fort Worth.

The other dinosaur species confirmed to be in the state is a Sauroposeidon,  known as the tallest known dinosaur to have roamed the Earth. It weighed in at over 4 tons and stood 60 feet tall.

Dinosaur Valley State Park is home to perfectly preserved dinosaur footprints that serve as a memento of what life was like millions of years ago, Riggs said.

“You can put your hand down on those footprints and see and feel so much detail,” Riggs said. “As a science-driven person, I love being able to look back at all the different organisms in time and say, ‘Wow, look at how life has changed.’ For our state, we can look at the rocks, fossils, and footprints to take that knowledge to see what the area looked like back when dinosaurs were actually making those footprints here 113 million years ago.”

The footprints show that most of Texas was underwater hundreds of millions of years ago with a large body of water stretching from what is now the Dallas-Fort Worth area into the Arctic Ocean, Riggs said.

“So a lot of Texas was an ancient beach with lots of dinosaurs walking along this path leaving their tracks in the mud — it’s a snapchat for us,” he said.

Pena said that due to most of Texas being underwater during the prehistoric age, archeologists would have to dig deeper than anyone has gone before to find dinosaur fossils in South Texas. 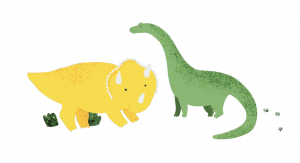 Even if dinosaurs aren’t found in the area, Pena said she believes their history is vital to the museum’s mission.

“Our mission is to tell the history of the Valley, South Texas and Northeastern Mexico. This is part of that history,” Pena explained. “I feel that since we don’t have a T-Rex or one of the popular dinosaurs, no one thinks about the Valley having major historical importance, but we do. We have a fantastic projectile collection we’re working on exhibiting with the university on this huge project. There’s certain parts we need to weave in but we’re telling everyone we have a historic story that needs to be shown.”

Garrigos said she agreed with Pena on the value of learning more of the prehistoric period in the Rio Grande Valley.

“There’s a story to be told here that shaped the environment to what it is now,” Garrigos said. “It’s important to understand why we benefit from the immediate land around us — it all comes to a point generations later.”

Garrigos said she has high hopes for the upcoming exhibit.

“We hope to make it an interactive one that is open to the public,” she said. “We will have the activities ready to download on our website and we’re hoping if it is done, we are able to capture the imagination of the children participating in the activity so we can see what they imagine a dinosaur might have looked like, which is still a mystery. At the end of the day, we don’t really know what a dinosaur looked like, let alone what color they were — it’s all just imagination and guesses. We’re hoping to have enthusiasm for our activities. Plenty of kids love dinosaurs and I hope we’re able to get some of that imagination at the museum.”

MOSTHistory is currently open from 10 a.m. to 5 p.m. Tuesday through Saturday and from 1 to 5 p.m. Sundays. It is closed Mondays. Social distancing and the usage of masks are required. The museum is open at 75% capacity and those wanting to visit the museum must purchase a ticket online in advance at https://mosthistory.ticketspice.com/timed-tickets.

For more information, visit the museum at mosthistory.org.