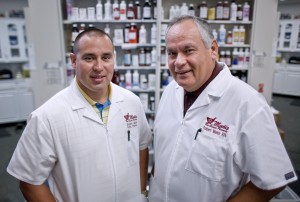 Socking it to the Big Guy!

When big ‘box stores’ come into town, most small businesses wonder whether their days are numbered. Not so Robert and Bobby Muniz of Muniz Rio Grande Pharmacy, who’ve been around for over 30 years. They know beyond a shadow of a doubt that they have a very definite niche and that large stores although they have their place, cannot possibly match them.

“It’s all about our customer service,” explains Bobby. “Even with a recent influx of customers to our pharmacy, we are able to keep it personal. Our customers know that they will be greeted by name when they come in to pick up or drop off a prescription.” Bobby takes pride in being able to help customers, regardless of how busy he is. Just in the last week he had a gentleman come in to thank him for his personal care and attention. “Four months ago he suffered a heart attack. His children, who all live in California, flew in to take care of him. They came to the pharmacy with a long list of medications their father had to take, and a laundry list of questions surrounding the prescriptions. They were concerned about their dad and wanted to know everything. They took meticulous notes as I gave them instructions on when and how he was to take his medicines.” The dad came to see Bobby and personally thanked him and his staff for their wonderful care. “He knows we are looking out for his best interest,” Bobby says, “and his kids rest easy knowing we want only the best for their father.”

That is not the only positive story Bobby can regale the reader with. He recounts another incident of a daughter of a client who was concerned with her mother’s health. Bobby asked her several questions about what her mother was taking and at what time during the day. “I recommended that she change the time she took some of the medications because it was causing some issues in the evening. I even said she might want to check with her doctor on changing one of the medications because it was causing her some discomfort. They took my advice, her doctor changed her prescription and the daughter returned specifically to thank me for taking time to talk to her, and give guidance.”

Attention to detail and to the client is second nature to the Muniz’s. Their pharmacy offers home delivery as well as charge accounts. They are one of the few pharmacies in the Valley who also provide customized prescription compounds. “If you are unable to swallow pills we will compound them and make them into a suspension for you,” Bobby explains. He is also proud to say that Muniz Rio Grande Pharmacy is one of the very few places in the Valley where one can get bio-identical hormones, and hormone replacement therapy. 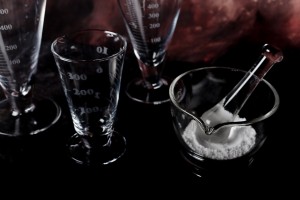 Bobby recently joined his father Robert in the pharmaceutical world, much to his father’s delight. “When I was growing up I wanted nothing more than to be a pharmacist,” Bobby says candidly, “but at one point in my life I thought I had been brainwashed into it. I was also concerned about the future of health care, so I went to college at Texas A&M to get a Food Science and Technology degree.” Bobby worked for Kroger for a number of years, and then completed an MBA at St. Mary’s in San Antonio. However he realized that health care was not changing as much as he had feared, and so finally faced the reality that what he really wanted to do was be a pharmacist. He returned to college and attained a pharmaceutical degree. He joined his father in the family business in 2009. “Although my parents never expressed their concern over what would happen to the family business if no one followed their footsteps, they have expressed their joy at me joining my dad.” Good thing too because Bobby’s two brothers are a psychologist and a law student respectively.

What is the future of Muniz Rio Grande Pharmacy, now that Bobby has joined forces with his father? “The quality of our customer service is not going to change — ever!” Bobby states emphatically. But he plans on utilizing technology to put a modern twist on it. Recently the pharmacy invested in a robot that labels prescriptions and measures doses. The robot helps cut time and frees the pharmacists up to spend more time interacting with their customers.

Bobby gets excited when he talks about the future of the pharmacy — he has already bought a domain name for the pharmacy and is in the process of getting a web site created. The web site will allow customers to refill their prescriptions online; and get the status of prescriptions they brought in to be filled. He plans on using software that will text, email or call patients when their prescriptions are ready. Although the pharmacy is closed on Sunday they do offer extended hours from Monday to Friday and are open on Saturdays.

At the end of the day, Robert and Bobby are not too concerned about the big guys who have moved into town, because they understand their clients and work hard at fulfilling their needs. “We treat each person as an individual and they know we care about each of them and will take as much time as they need to answer all their questions,” Bobby says. “That sets us apart.” That and their desire to be the best pharmacy in town!