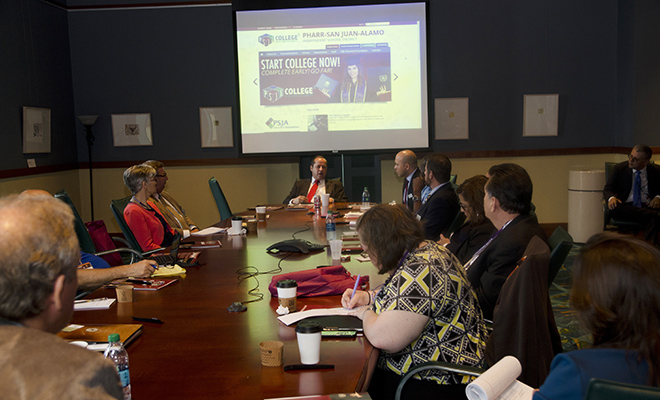 Jeff Fleckenstein was intrigued by Pharr-San Juan-Alamo (PSJA) school district’s early college program. In fact, he was so impressed with what PSJA was doing when he made a visit last year to South Texas that he and other college liaisons at Madison High School in North Carolina immediately launched their own version of an early college program.

“What I saw when I went to participate was a truly passionate superintendent who believed that every student could attend college and graduate,” Fleckenstein said. “We’re trying to apply the early college model to a rural community and we were looking at PSJA’s model of an early college (program) as well.”

Fleckenstein said there are similarities in regards to students needs between PSJA and schools in North Carolina, which is what gravitated him and others to the PSJA’s programs.

But Fleckenstein isn’t the only one impressed with PSJA’s early college direction. In fact, hundreds of visitors over the years have visited several campuses in order to see first-hand what it is that makes the school district’s early college program so successful. With so many visitors filing in to visit the area, the district thought it would better serve those visitors by hosting what it turned out to be a national conference.

Thus, the “College For All” conference has been launched and PSJA held its first gathering on Oct. 23 and 24 at the McAllen Convention Center. Aside from lectures and discussing strategy, participants also did site tours at various PSJA ISD campuses.

For Fleckenstein, North Carolina has a version of what PSJA offers its student body, but not quite at the level of PSJA ISD.

“North Carolina New Schools believes that every student deserves to go to college and have a career and give back to the community. North Carolina is completely in line with PSJA,” Fleckenstein said. “North Carolina and PSJA are, in a sense, collaborating. I think it’s a wonderful experience we have with this sharing between the school leaders in North Carolina and the great folks at (PSJA).”

Aside from lectures on early college campuses, the conference held sessions about dropout recovery and intervention, instructional strategies, and the Texas House Bill 5 — which limits the number of end of year testing and allows the student to choose their curriculum while maintaining “academic rigor” — and career pathways.

Dropout recovery and intervention looks to bring back those students not only to gain their diploma, but prepare them for college and earning a college degree.

“I’m expecting something a little different. I expect to share with many innovative school leaders in our North Carolina network to change the community,” Fleckenstein said. “I think also I’m interested in how PSJA will share lessons learned.” (Delete?)

Fleckenstein was delighted at the chance to head back to the Valley.

“They are doing great things there,” Fleckenstein said, “and they are definitely lessons to be learned from there.”