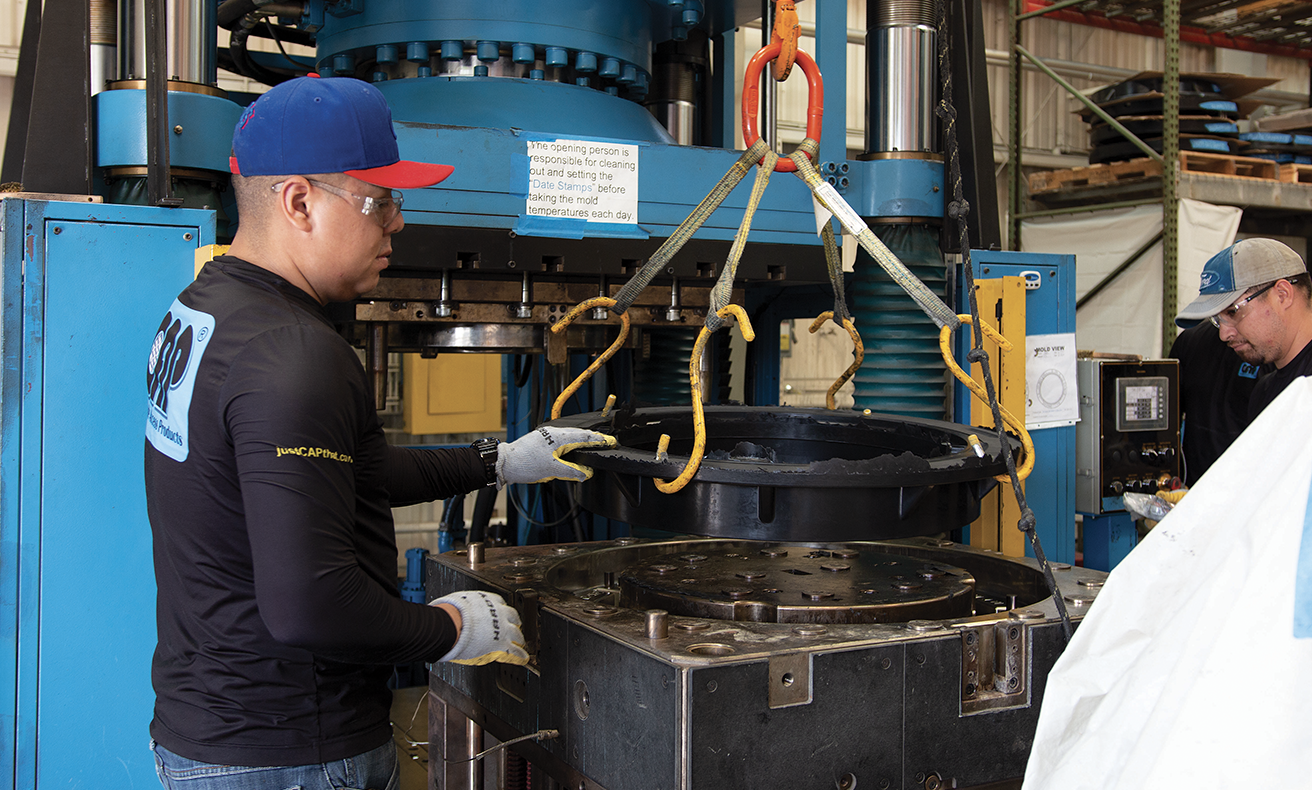 The average person doesn’t give manhole covers much thought, but W. Chad Nunnery and the rest of the team at Composite Access Products — CAP — in McAllen are the considerable exceptions. CAP is the only company in the United States making composite manhole covers and frames using high-speed, high-pressure compression molding.

The results are manhole covers and frames that are lighter than their iron counterparts and that last longer, among other benefits.

“Why would people go to composite? This is one of the biggest things you see happening in the world,” Nunnery said, scrolling through photos of corroded covers and frames. “The iron will actually corrode not just from saltwater and water on top but more from hydrogen sulfide from sewage. Sulfuric acid eats iron and the concrete around it. It fuses the cover to the ring and they can’t open them up.”

The Rio Grande Valley is particularly hard on iron covers and frames, likely due to the high temperatures, proximity of the pipes to the surface, flow, length of flow, and number of lift stations, Nunnery says. Covers can fall through completely corroded frames, posing a danger for pedestrians and motorists. And if the corrosion completely freezes the cover, it makes it difficult to inspect.

CAP’s composite covers and frames are more of an investment upfront. But when factoring in costs and risks of replacing iron covers and frames more often, CAP is often the better option, Nunnery said. Additional dangers come when workers attempt to lift heavy covers.

“Lifting safety — this is a big deal,” Nunnery said. “Our cover is about half the weight. This is really breaking backs.” Calculating the cost of back injuries and frequency they occur each year, “that’s almost a million dollar problem.”

“The Chinese lost 240,000 covers in one summer to theft in Beijing,” Nunnery said.

The heavy iron makes a tempting target for individuals looking to sell it to metal recycling facilities. But CAP’s composite covers and frames don’t carry that same temptation since they aren’t made from iron.

“Another big issue nationwide right now is the flooding,” Nunnery said. “The stormwater goes into the sanitary sewer water. If it goes in too much, because there’s a limited capacity that can process that, it goes backwards, which means it goes into the street. If you have a big flood, they’ll say there’s fecal matter in there, pathogens get into the environment. Pollution issue, chemicals from whatever, your cleansers, and all that.”

It’s a health hazard that CAP is also addressing with watertight covers, running tests to show cities that might be at risk for fines from the Environmental Protection Agency for contamination that there is a solution to the issue.

“There’s nothing flowing through,” Nunnery said, playing a video of one such test. “That’s something that is attractive to a lot of cities.”

Nunnery established CAP in 2015 with composites experience already under his belt. After investing time and money into the project, he turned to the Rio Grande Valley Angel Network, a local organization dedicated to sparking growth and offering resources and funding for entrepreneurs.

“John Martin introduced me about two years ago to the group,” Nunnery said. “They asked me to give a pitch, so I went. I think I was one of the first Rio Grande Valley companies.”

“You were the only — so far — Rio Grande Valley company to do a presentation,” Martin said. After several rounds of pitches from Nunnery, the network has invested just under $1 million in CAP. “You’re the single largest recipient of the angel network’s money because they really do want to support a local business.”

The support has helped, and CAP continues to expand. The Texas Department of Transportation approved the frames and covers for within the roadway use — the first and only such approval. Other departments of transportation around the country — including Oregon and Oklahoma — are also using CAP products.

CAP also offers high tech covers with sensors and transmitters to alert workers in the case of sewage backups, among other issues. Cities can also customize the color and design of their covers. All covers in San Juan, for example, are molded with images of the Basilica of Our Lady of San Juan del Valle.

The composite itself is not unlike a bread dough, consisting of honey-like resin mixed with chopped fiber glass, pigments, peroxides, and other additives. CAP team members add the composite to the press, which applies 600 tons of pressure at 300 degrees Fahrenheit. After only about 16 minutes, the finished cover — or frame — is complete. “It’s almost kind of magical,” Nunnery said.

The quick turnaround means that CAP can complete orders from scratch in a matter of a couple of days.

“We got an order for 85 for Harlingen,” Nunnery said. “We didn’t have them in stock. We made them in two days and shipped them out.” Nunnery’s closest competition, another composite company in the United States, would’ve taken eight to 12 weeks to complete the order because of the longer process time.

“Getting the word out is half the battle. People don’t know about composite manhole covers,” Nunnery said. “We can pop these out quickly. We have materials made here in the U.S. and local materials. I know the formula. I know the chemistry of the formula.”

One might say that the other half of the battle comes from Chinese competitors and the challenges they present with cheaper, low-quality, copy-cat products. There isn’t a way to quality control these products, Nunnery said.

In spite of the headaches this presents, Nunnery still foresees growth in his company’s future, including adding more employees and another shift as demand increases. There are additional applications for the composite, including a custom ring that fits on the frame to bring the manhole cover flush with the surface of the pavement in cases of overlay.

For now, there’s still a sense of novelty when Nunnery or people who know about the work CAP is doing come across one of CAP’s manhole covers.

“It’s really neat to see when you’re surprised by it,” Nunnery said. “Every time, it’s, ‘oh, let’s take a photo of it.’ Everybody gets excited seeing our covers. I have people telling me that wherever they go, they’re looking for manhole covers.”

For more information about CAP, visit justcapthat.com/. To learn more about the Rio Grande Valley Angel Network, go to rgvan.org/.