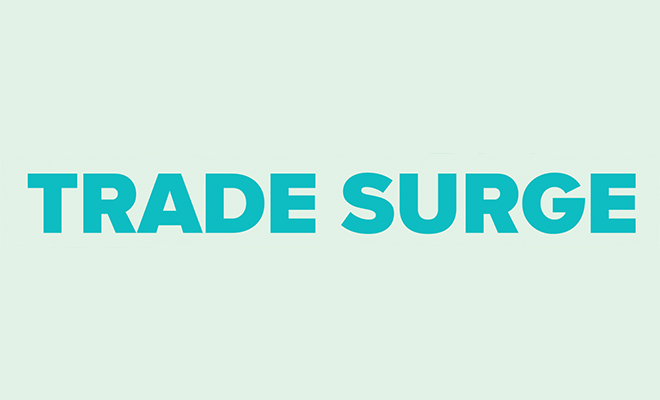 The regional economy of the Rio Grande Valley has been transformed in the 25 years since the passage of the North American Free Trade Agreement.

There’s more international bridges, additional commerce and trade over land and seaports, and a sense that the lowering of barriers to trade in goods and services has energized our region’s growth. The presidents of the United States and Mexico and the prime minister of Canada have signed the revision to NAFTA. The updated document — the United States-Mexico-Canada Agreement — was passed by the U.S. House of Representatives on Dec. 19. At the time of publication, the Senate was likely to take up the legislation after the holidays.

The need to pass the USMCA is urgent for our region. Looking at some of our key crossing points, we can see the need to build on what NAFTA started and boost trade and commerce with the new trade agreement.

According to the Texas Workforce Commission, unemployment was at 21.1 percent prior to NAFTA, which has reduced to as low as 4 percent to 7 percent unemployment in some of our communities.

At the Port of Brownsville, it’s estimated the seaport supported 3,052 direct jobs and generated $169.5 million in direct personal income in 2018. Much of that activity is connected to trade between the United States and Mexico. The need to keep this economic momentum going makes final approval of the USMCA essential. 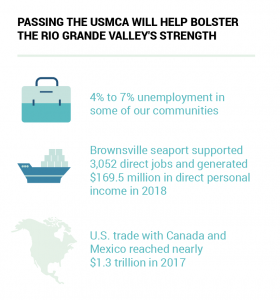 Every credible economic study points to the importance of enacting the USMCA. An International Trade Commission report recently released states that the USMCA is poised to raise the U.S. real GDP by $68.2 billion and result in an estimated 176,000 new jobs. The commission also estimates that USMCA would boost U.S. exports to Mexico and Canada by about $33 billion.

According to the USMCA Coalition, trade with Canada and Mexico reached nearly $1.3 trillion in 2017, and the two countries bought more than one-third of all U.S. merchandise exports. The U.S.-Mexico-Canada Agreement preserves and strengthens the benefits of North American trade for American workers, farmers, businesses, and consumers. Thirty-nine U.S. States count Canada or Mexico as their top trading partner.

Bring all those numbers down to the local level and we will see a continued surge in the Valley’s economic activity. Our region’s ports of entry have seen total trade grow from $15.2 billion in 2003 to $35.4 billion in 2018. It’s a testament to how the push to more open and free markets with lower barriers and tariffs can generate growth in the import and export of key commodities like plastics, computer machinery, and automobile parts.

The Valley is poised to see another great era of growth to expand on what we’ve seen in the 25 years since NAFTA was passed and enacted. The USMCA will add to what has already been done in international trade and commerce and help usher in another era of prosperity. Combine that with expected investments of $2.2 billion over the next decade in state funds for highway and transportation systems in the Valley and we can see a bright future for the Rio Grande Valley.

We urge our senators in Washington to work out the final details of the USMCA and work toward its speedy final passage.

What are you most excited to see in the Rio Grande Valley’s future growth? #JoinTheConversation at facebook.com/rgvisionmagazine.