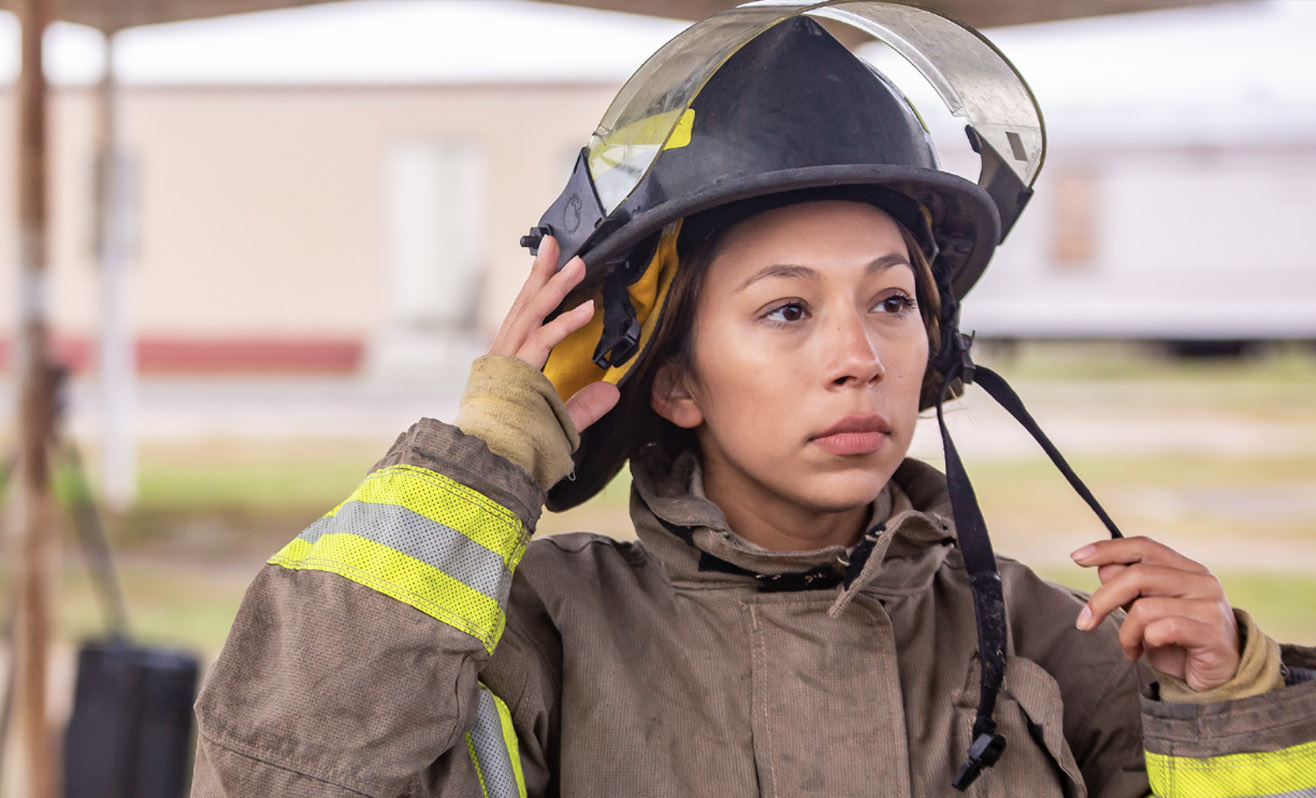 At first, it wasn’t easy for Gina Perez to fit in with the rest of her class at South Texas College’s Fire Academy.

She was the only woman there.

“It definitely was a challenge just to get everyone to feel OK, because they’re kind of unsure. They don’t know why you’re there,” the 29-year-old said. “I’m kind of small — I’m 5’3’’ and I’m not super built, so you’re like, how is she going to keep up?”

Perez soon proved herself to her male classmates, keeping up with them in studies and practical, hands-on training.

“Once you go through and prove that you deserve to be there just as much as they do, it’s no longer like, ‘she’s a girl in the room’ — she’s now one of the guys,” Perez said. “At first, it was kind of uncomfortable, but then, after a while, it was being one of the boys.”

She made lasting friendships in the program with her firefighting brothers, and graduated this year.

“All of us got really close and we made a lot of good memories there,” she said. “I would’ve had to say the whole way through it was just a lot of fun. We got real close to each other.”

Perez, of Los Fresnos, had a fascination with fire from a young age.

“As much as my mom told me how dangerous it was and to be safe, it was always something that I thought was kind of a beautiful thing,” she said. “Later on, of course, you grow out of those things — you forget about it.”

Her other passions, like fitness, led her back to pursuing her interests in firefighting. Originally going back to school to become a dental assistant, Perez pivoted to make the decision to enroll in the Fire Academy.

“First ride out, I was hooked. I just wanted to do more.”

More came in the form of learning to trust herself — even as she learned how to keep herself and the people she served safe through her studies.

“A lot of people don’t realize there’s a lot of safety and rules to learn before you get to the hands on, so it was a lot of studying before we actually put our hands on the tools,” Perez said. “They tried to really get you educated on that before they put you in there.”

With the lessons she had learned in the Fire Academy, Perez found herself taking on more responsibility when she volunteered as a firefighter.

“I would say the benefit was the skills training — it taught me a lot and going through it I learned, OK, this is exactly what I want to do with my life,” she said. “It taught me real quick that you have to be strong not only physically but mentally. I want to say that it also gave me confidence because before, when I was just volunteering, I kind of wouldn’t want to step in and assist with too much — I would kind of just help with the traffic and stuff like that. Never wanted to actually get in there because I didn’t feel like I was qualified.

“After the training, it really helped me get after that. It gave me more confidence, that’s for sure.”

Right now, just like for many others in the Rio Grande Valley and beyond, firefighting for Perez is at a standstill due to the COVID-19 crisis. She is waiting to take a postponed refresher course so she can retake her hazmat operations section on her state exam. Perez and her mother own a catering business that has also been impacted by COVID-19. Currently, she does office work with a private security company — but is looking forward to getting what she needs to pursue her firefighting dream full time.

For other women going after their dreams, Perez recommends looking outside the box for fulfillment.

“I know there’s some people that are meant to be nurses or like dental assistants, hygienists,” she said. “There’s different things you can do, but if you ever felt like you just didn’t fit in in all those other places, I would definitely try something out of the norm. Most people see it as a male career, but if you want something that will challenge you physically and mentally, I would definitely recommend it.