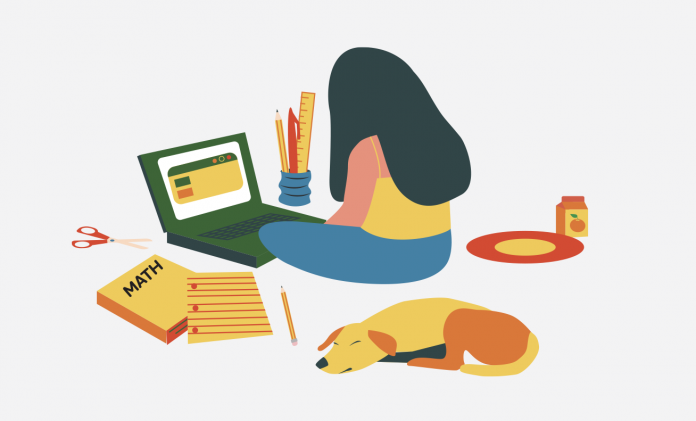 Kristin Keith, an English teacher at Donna North High School, laughed as she described an interaction with one of her students during the past school year. He told her he’d seen her shopping at Walmart over the weekend. She informed him that she wouldn’t have known him from any of the other high school-aged shoppers because he never turned on his device’s camera during class — as is the case with many of her students. It isn’t a district requirement.

But that leads to a less funny issue.

“It’s hard to build rapport with your students — it takes a lot longer,” she said. “That’s been a struggle for me. How can I get these kids to do the things they’re supposed to do when I can’t create the relationships with them that I usually do?”

In her 13 years as a teacher, Keith has learned that good classroom management — including discipline and structure — enables kids to be more productive. Even as she strives to maintain some semblance of that in her virtual classroom, it obviously isn’t the same.

“It’s frustrating from a standpoint of I know I have students that are way more intelligent and way brighter than what their grades are showing and in my opinion, it’s an attitude of apathy for most of them,” Keith said. “I get it — I’m a person that thrives on routine. Kids thrive on structure and routine.”

Education experts and leaders across the RGV and country are watching the phenomenon of “learning loss” — something that usually takes place naturally between grade levels, when students take their summer breaks and forget some of what they learned the previous year. When some students haven’t been in a physical classroom for a year-and-a-half, however, learning loss may become even more of a problem.

More than half of public school teachers are seeing “significant” learning loss for kindergarten through 12th-grade students, a report from educator-centric insurance corporation Horace Mann finds.

“We see it. There’s drastic, drastic gaps,” said Yvette Banda, an academic coach at Ruben Hinojosa Elementary School in Mercedes. The biggest impact at her campus has been for pre-K through second-grade students, who usually learn the fundamentals during individualized instruction and small group work in person with their teacher every day. “That has not been able to happen this year.”

One example, she said, is the transition between first and second grade. Students who would usually leave the first grade as fluent readers aren’t reading yet, creating an issue for second grade. Math, a usually strong subject for the campus, is another issue.

“Concepts and things they would’ve grasped probably in face-to-face instruction, now they’re just lagging behind,” Banda said. “First we have to figure out specific gaps, which is what we’re trying to do with any testing we’re giving. What is it that students didn’t get? From there we plan accordingly.”

For Banda’s campus, that would include supplementing regular instruction with small groups to address deficits — and continuing to offer additional support through intervention blocks.

Parents needed help getting up to speed with the unprecedented school year, too.

“I was on the phone every day with parents from the morning to the afternoon because parents didn’t know how to tackle the technology,” Banda said. “They’d come to the building, we’d show them, we’d train them, we’d create their accounts on the devices.”

Mercedes ISD was able to fill a technology gap during the 2020-21 school year, ensuring that students had access to devices to learn remotely. Banda looks forward to leveraging that new connectivity in a healthy way in classrooms. More than that, though, she’s hoping that all students will be back on campus, face to face, in the fall.

“Kids need it. Right now, they don’t even get to engage with each other. It’s just been heart-wrenching, honestly,” Banda said. “I think the first time I saw kids in the building, I couldn’t help it — I was just crying. It was so good to see them in person.”

Only about 200 students were on campus at Ruben Hinojosa Elementary toward the end of the school year — a fraction of the regular population.

At IDEA Academy Alamo, however, 70 to 75% of students attended class in person during the same period of time. Those numbers were high even when the campus first reopened its doors in November 2020 — 50 to 60% of the student body reported to classes.

The advantage of in-person instruction is evident: Pre-K students at the campus are 100% on track to meeting their end-of-year goals, said Principal Ana Garza.

“It’s unprecedented during these times, but why?” she asked. “Because that constant communication with parents — we’re ensuring kids are either connected virtually or in person and we’re doing one-on-one assessments, if needed.”

That doesn’t mean Garza’s campus has been without its challenges, however. Second-graders are 65 to 75% on grade level — numbers that would normally be at 85 to 92%. And home visits to try to reconnect with virtual learning students who haven’t been logging on revealed that students no longer lived at the listed address — or have relocated, sometimes to Mexico.

“We don’t really know where the story took them,” Garza said. “That’s been a difficult thing for us to handle because it’s one thing that we take a lot of pride at IDEA and our campus: really building relationships with families.”

To address the pandemic school year in a compassionate way with goals still in mind, there has been a shift in approach to measuring academic success, she said.

“What are the goals for our students from where they’re at?” Garza asked. “It’s not just about numbers, it’s about students seeing themselves successful in the work that they’re doing.”

All educators have had to adjust their practices and expectations throughout the year to adapt to a constantly changing reality.

“A saying that has been really ingrained in my mind this year has been, ‘we’re flying the plane as we’re building it.’ That’s really what’s happening right now,” Garza said. Leaders like her are trained to imagine the “what if” scenarios to ensure their campus is prepared for anything. “But never do you get thrown, ‘well, what do you do when there’s a global pandemic and you can no longer teach the way you’ve been teaching for years?’ For a lot of these things, there isn’t a map to follow.”

For example, she said, teachers who usually give rich in-person lessons have had to modify them into virtual presentations, which then have to evolve into interactive learning opportunities. When everything is all set up for an engaging and educational experience, technology fails. It makes everyone work harder — and do work over again — to try to ensure students have access to the resources they need to learn.

And to avoid falling in the gap.

Donna ISD’s Keith bristled at the suggestion that the 2020-21 school year will be one defined by learning loss — at least for her students.

“My concern with this emphasis on learning loss is we’re going to start creating the narrative that kids are going to internalize that they’re not as smart as they should be because of this entire situation that they couldn’t control,” she said. “All they’re going to hear is ‘I’m not good enough because I had to learn online for a year’ or ‘I’m not good enough because I had to work to help make sure that there was a roof over my head and there was electricity on because my dad couldn’t work because he lost his job because of the pandemic.’”

Instead, Keith suggests focusing on the positives, silver lining moments that have emerged from virtual learning and the pandemic as a whole.

“Let’s talk about all the things that they did learn from this experience that are life skills that they will take with them for years to come,” she said. “They learned to become resilient in difficult situations. I’m sure that some of them have become better with technology than they were previously. Hopefully some of them have gotten better at their time management. A lot of my kids have expressed that they got closer with their families through this experience.”

If we’re talking about being worried about the gaps caused by learning loss, Garza says, we need to be aware of social gaps, too.

“Our kids come back and you can see the fear in their eyes about being around other kids,” she said. “You see kids isolated because they haven’t been around other children or other people.” Garza is already brainstorming about regular counselor-led sessions on socializing and building good relationships after friendships languished in favor of physical health and safety.

“Our kids stopped being kids for a year, almost,” she said. “We need to get that back.”