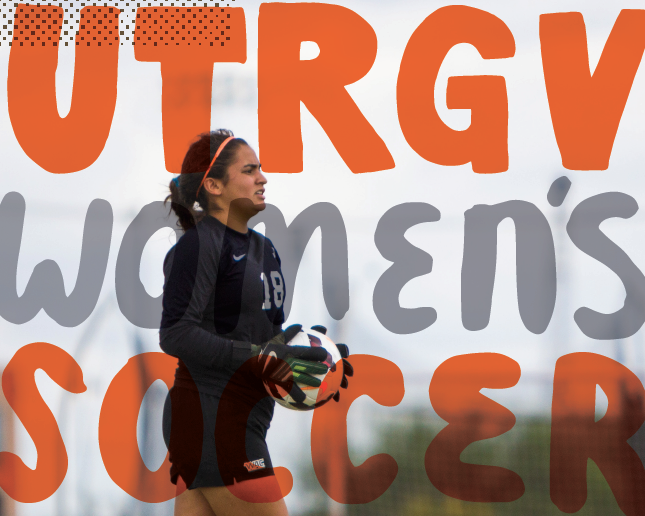 The first season for the UTRGV Women’s Soccer team is wrapping up with a series of tournaments scheduled to close out their successful year. Still a young team, these women are proving themselves in the Western Athletic Conference. Since the inauguration of the women’s soccer program at the University of Texas-Pan American (UTPA) just three years ago and through their transition as part of the University of Texas Rio Grande Valley (UTRGV), these young women have inspired girls across the RGV, both on and off the field.

Head Coach Glad Bugariu has been with the university through the transition and recognized the benefits.

“The development of UTRGV is better for the Valley as a whole,” he said. With its increased opportunities on and off the field, he added, “It’s a big point of pride for the Valley.” Each of the young women on the team has made a big commitment in time, effort, and sometimes sacrifice. College athletics not only takes the competition to the next level, it also requires excellence across the board, including in academics. However, when asked, it is clear that the players love what they do.

Harlingen South alumna Erica Gonzalez is a pre-dentistry student and in her third year as goalkeeper with the team. Erica and her sister Arnelle represent the Valley as part of the UTRGV Women’s Soccer team along with America Martinez of McAllen, Elvia Valdez of Weslaco, and Amanda Lozano and Daniela Cantu of Mission. These young women have taken different paths to reach their goals, but all are thrilled to have the opportunity to get a great education and represent their cities so close to home.

“Playing at UTRGV is great because it’s really close to home so my grandparents and all my family come out to every game,” Gonzalez said. “That’s the best part about playing here.” Gonzalez has been playing soccer since the age of 4 on club teams including the Celtics and Scorpions in Harlingen as well as in school. Along with her studies, Gonzalez has regular soccer practice and travels with the team. She noted that being an athlete in college has tremendously improved her time management skills, and even with all of her activities, she makes time to be a leader in her community. As a junior in high school, Gonzalez had ambition and a passion to bring her love of soccer to those who do not have the opportunity to play and because of this, brought US Youth Soccer TOPSoccer (The Outreach Program for Soccer) to the RGV.

TOPSoccer is a community-based training program that enables young athletes with disabilities and gives them the opportunity to learn and play along with other children and volunteers. Gonzalez started the program at Harlingen South High School and has expanded it with the help of her teammates, UTRGV, Rio Valley Youth Soccer and the South Texas Youth Soccer Association.

Through these community events as well as visiting schools and club teams across the Valley, the UTRGV athletes are inspiring young girls throughout the RGV to get in the game. UTRGV assistant coach Lindsay Vera recently became coach of the newly formed girls’ soccer program at Plaza Sports Center, teaching technique to beginners of all ages from preschool through high school. The program provides a great opportunity for girls to get a good foundation for the game and develop their skills. Though many people assume college athletes have been playing since childhood, that is not always the case. Cantu, who played at Sharyland High School, began playing the sport at the age of 14. With the drive and desire to continue playing at the collegiate level, Cantu reached out to Coach Glad, as the players call him, to attend her game, and she ultimately made the team.

For those who want to play college soccer, Coach Glad stressed the importance of getting coaches to see you play. H

“There is an opportunity for everyone to play college soccer,” he said. “The key is finding the right size and the right university.” He noted that it is also a big commitment that should not be taken lightly.

Bailey Huston, 11, who plays for the South Texas Dynamo Junior club out of McAllen, loves playing the game and being part of a team. Along with her evident love for the sport, Huston enjoys the opportunities that she has had so far, including traveling with her team and proving her skills out on the field. This past summer, the South Texas Dynamo organization’s Under 17 girls claimed the National Presidents Cup, leading the way as the first ever South Texas team to earn a national championship. Being part of a team has been an excellent learning experience for these young women and girls, encouraging teamwork on and off the field. Like many of the U17 girls whose college days are just around the corner, Huston looks forward to continuing her soccer career in college.

“I think if I work hard now, then I can get a college scholarship and get into college,” she said. “I think it’s just really cool to play.”

Today, thousands of children across the Valley are playing soccer and enjoying the fun, exercise, and teamwork that comes with it. Along with the opportunities to play in junior high and high school, there are many organizations in a city near you that provide opportunities for all ages and levels to get involved. The number of kids playing soccer in the Valley is increasing every year, and as the program continues to grow, UTRGV Women’s Soccer players are making an impact in our community and encouraging participation in this worldwide sport.

Good luck to the UTRGV teams as they close out their 2016-17 season!