Julie Ramirez’s day starts early with a desk piled high with papers, a phone full of voicemails and an inbox overflowing with emails. She walks the hall and checks her office to make sure everything’s operating. “If it’s not a faucet breaking, it’s a door falling, or air conditioning trouble.” Seems pretty normal, right? But this Harlingen woman’s job is far from normal.
Julie is the Director of the Progreso International Bridge. She runs one of only a few private ports of entry in the U.S.  In 2009 this Mid-Valley Bridge had over 1.5 million crossings between commercial vehicles, privately owned vehicles and pedestrians.  Progreso International Bridge also plays its part in moving goods into America.  A total of $1,715 billion in goods were imported into U.S. commerce between the eight ports of entry from Brownsville to Del Rio.

It’s not just Julie. The Progreso International Bridge is run by two dynamic women. A few feet away are the offices of Nancy Becker, Port Director of Customs and Border Protection responsible for enforcing governmental regulations at the Progreso port-of-entry. Together they work to improve and provide better service to the traveling public. “It’s a great partnership,” Julie explained.

Julie grew up in San Benito and started her career in the banking industry in 1977. While working for a Harlingen clothing store, Julie was in charge of making the daily deposit at Plaza National Bank just across the street.  One day, a female VP of the bank approached Julie and asked her if she wanted a job.  It didn’t take long for Julie to realize this was a great opportunity and a chance to make “some big time money” – $400 a month.

Julie made a brief move to Laredo but returned to Harlingen in 1985. She worked in the banking industry until Sam Sparks, owner of the Progreso Bridge, found her. He recognized her unique talents and tapped her to become bridge director in 2000. “I would have never thought I’d be a Director of an international bridge but I wouldn’t change jobs for the world” said Julie.  She has served her community by sitting on several boards like the Rio Grande Valley Partnership and Knapp Medical Center. 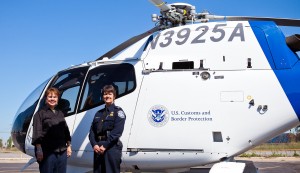 Nancy Becker was born and raised in Corpus Christi, Texas.  At an early age her father gave her lots of responsibility.  “I can remember at the age of 14 my dad handing me the keys to the truck and a check to head down to the feed store” said Nancy “That’s when I knew I had to start pulling my own weight.”

Nancy Becker started her career in government at the age of 19. She was the only female and the first student ever to enter a CO-OP program between Texas A&I University and the Department of Commerce National Marine Fishery Services in Galveston. She dreamed of becoming a Marine Biologist.  In 1981, she gradated sum cum laude from Texas A&I University at Kingsville with a degree in Biology and Chemistry. She tried, but struggled to find a job in either field. “I thought it was a sign for me to continue my education, so I started the process to get my Master’s Degree” said Nancy.

Out of the blue, the US Department of Agriculture sent Nancy an application for an opening. She read the job description for “agriculture specialist” and noticed one of her duties was to do something called “ship boarding”. She paused, and knew this was her chance. The marine biologist at heart jumped at the chance to be near the water and board ships to inspect their cargo. “I figured I’d be on the water, and that was good enough for me at the time,” Nancy recalled.

By 2002, Nancy was selected to be Port Director for the USDA Houston Seaport Operations.  In 2003, as part of the response to 9/11, the Department of Homeland Security was created, and everything changed. Nancy recognized this as an opportunity and accepted the challenge.

“This was a huge change. For years you had three agencies at each port— US Customs, Immigration and USDA.  After 2003 we were all merged into one agency: Customs and Border Protection.”

So how did Nancy end up at Progreso?  She says, “I realized that I needed to embrace the new agency and gain additional experience at a land border port-of-entry.”

In 2005 she applied and was selected to be the Assistant Port Director at the Brownsville Port over Trade Operations which encompassed two commercial cargo lots as well as the Brownsville seaport and two airports.  In March of 2010, she was selected to be Port Director of Progreso International Bridge. Another woman, the Director of Laredo Field Operations, Leticia Moran has served as a role model for Nancy within the agency.

Julie and Nancy both credit their fathers and mothers for instilling a work ethic and the belief that nothing worth your time comes easily.

“It takes a lot of courage and faith to take those leaps that take you where you are.,” Julie said. She has had her husband Robert at her side for 33 years and her two children. “He is my rock, and he has always supported me.” Nancy says her husband of 23 years, who she met while inspecting cargo at Continental Airlines has always supported and encouraged her to take on new challenges.  “When I talked to him about applying to the Brownsville Port and the move we’d have to make from Houston, he said go for it since both of us are from Corpus it would give us a chance to get back to south Texas”, Nancy said.

Now, these women watch over thousands of people who do business on both sides of the border every day of the year. They use their skills to build relationships, cultivate commerce and foster friendships at one of the Valley’s most important international bridges.

Editor’s Note: The Rio Grande Valley and South Texas are home to many female trailblazers  rg Vision Magazine has already profiled Senator Kay Baily Hutchison, the first female US Senator from Texas and UTB President Dr. Juliet V. García the first Mexican-American woman in the nation to become president of a college or university.