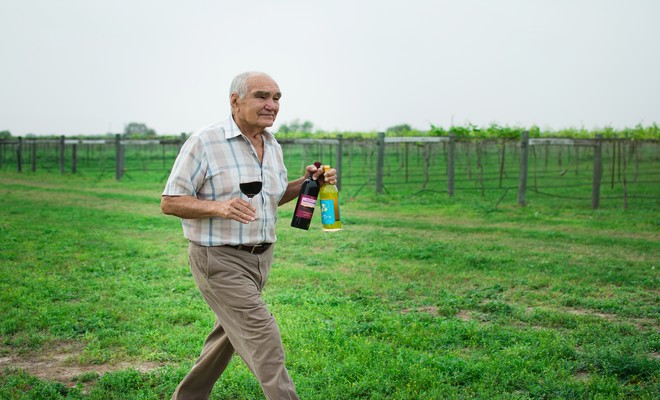 “I cannot wait to finally try the wine,” Stephanie Leal exclaimed as soon as we stepped out from the gusty fields of Jaber Estates into the bar where the tasting is held.

Leal and her group had spent the last hour touring the only combination winery/vineyard  in the Rio Grande Valley. Located north of Mission, Jaber Estates is owned by 83-year-old Jorge Jaber, a former petroleum engineer in Mexico. He opened the winery in 2011 after planting the first of his grapes two years prior.

Walking the group through the grounds, Jorge had just explained how the white and red wine he produces goes from plant to bottle all on site. Both red and white grapes are grown on over eight acres, picked, processed, and finally fermented in the four giant stainless steel vats that make up the winery. He demonstrated the bottling process and showed us the roll of branded stickers he places on the bottles for the finishing touch. Surprisingly hands-on for his age, Jaber takes DIY craftsmanship to a whole new level.

He is also a wealth of information, and the wine tasting and tour offer an introduction to wine in a friendly atmosphere. Jorge was inspired to open the winery following his lifelong passion for drinking it, which he has had with every meal for the last 55 years. He has traveled extensively to try different wines, and some years ago he obtained a wine-maker certification in Spain. However, he does not claim to be an expert and does not aim to convince anyone of anything. He makes sure to tell every tour group that he has produced a good, well-made wine, but that it is up to them to determine if they enjoy it.

“Wine is like food,” Jorge explains. “You yourself will know what’s good for you. Since everyone has different tastes, you can be the only one who decides what type of wine you’ll like.” And now, with heightened anticipation as we took our seats around the bar, we were about to taste the literal fruits of his labors.

Jorge uncorked a bottle of white wine first and filled the nine glasses that were sitting on the bar expecting us. Made from a variety of white grape called Blanc du Bois, the wine had a sweet, light fruity taste with a smooth aftertaste that reminded me of caramel. As we drank it, Jorge brought up how wine is a meal’s best friend.

“[Wine] brings out the flavor of the food and it creates a very rich experience that leads to a much more satisfying meal,” he said. “White wine of course must always be served chilled and would work best with foods like pasta and white meat such as chicken.”

Jorge next pulled out a bottle of red wine, much to the delight of Stephanie, who said she had skipped refills of the previous wine to get more red. The red wine was harvested from Black Spanish grapes and had a tangy raspberry flavor that lacked the bitterness of most red wines I’ve had.

As we sipped, Jorge continued his explanation about food pairings. “Red wine is paired best with red meats such as burgers or a nice fajita during a carne asada,” he said.  I suddenly realized that by that point, I had drunk nearly four glasses of wine and the craving for fajita, or at least a burger, was strong.

After purchasing a bottle of white and red wine to take home, my friend Lea and I talked how fun it’d be to visit Jaber Estates again. Jorge had shared plans of building a kitchen near the bar, and he already has the space ready for a gift shop. Outside, with a view of the vineyard, he has an area prepared that is large enough for events. It is complete with stage and bandstand, and Jorge shared that they recently hosted a wedding. With all the amenities in place and a supply of wine aged and ready to be served to the RGV, we wondered how we’d never heard of this place sooner.
Jaber Estates has weekly winery tours. Call 956-330-3609 to make an appointment or like them on Facebook for news and more information.