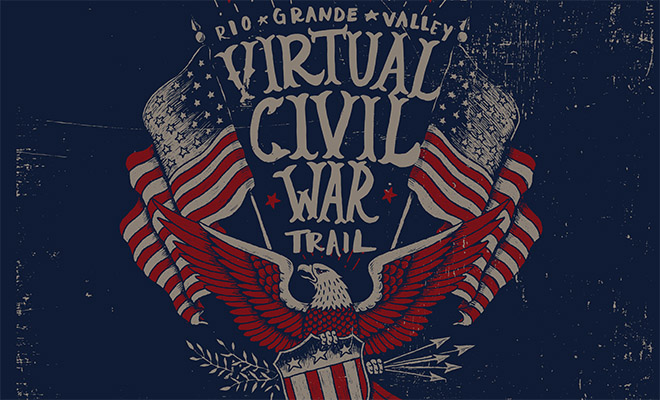 When we think about the American Civil War, the last place that comes to mind is the Rio Grande Valley. Although the area is well known for its rich historical background, few people know that figures like Ulysses S. Grant and Robert E. Lee walked through the Valley during the American Civil War or that the last land battle of this war took place just outside of Brownsville. This is why Dr. Russell Skowronek, Professor of Anthropology and History at the University of Texas-Pan American and Director of UTPA’s Community Historical Archaeology Project with Schools Program (CHAPS) began gathering support from local associations, leaders, foundations and city governments to build a virtual Civil War Trail that tells the story of the region’s role in the war.

Although Dr. Skowronek and the CHAPS Program faced skepticism and lack of resources in the early stages, local leaders slowly began to realize the tremendous opportunities this initiative presents. The Civil War Trail will not only bring cultural and historical enrichment to Rio Grande Valley residents, but will also stimulate the economy through heritage tourism. Although the Valley is already home to the renowned Great Texas Coastal Birding Trail and the Texas Tropical Trail, this will be the only Civil War trail in the entire state of Texas.

The trail uses different multimedia platforms to lead visitors through the different forts and battlefields where skirmishes and battles took place. The bilingual website provides in-depth information on the region’s involvement in the war and details the events that took place at each site. Visitors can also scan a QR code located on the bi-lingual trail guide, which will be published in February, to access a podcast that tells the story of what happened in that particular location.

The CHAPS Program team also plans to provide local educators with tools for them to incorporate the trail into their Texas history curriculum. A brainstorming meeting will be held in February 2015 to assess what teaching materials are needed so that students can take advantage of this initiative and learn about their area’s role in American history.

Why build a Civil War Trail in Texas? This is a question that Dr. Skowronek and the CHAPS Program team have been asked many times. The story of the Rio Grande Valley’s involvement in the American Civil War dates all the way back to the Battle of Palo Alto in 1846. “During this battle, there were 53 lieutenants of the US army who would go on to become generals in both the Confederate and Union Armies. One of them was Ulysses S. Grant, our 18th president,” explains Skowronek. “These folks who were making war on Mexico were learning combat skills which would, 15 years later, be used on their brother officers.”

Once the Civil War broke out, the Rio Grande River and all of its surrounding areas had a huge impact in the entire landscape and outcome of the war. “When the Civil War was taking place, the Union tried to squeeze the life out of the Confederacy by blockading ports. One of the places they couldn’t legally blockade was the Rio Grande River because it was an international boundary,” explains Skowronek. “If you could get cotton across the river into Mexico as a neutral country, they could then sell that cotton and gain military weapons and money for the Confederate cause.”
The bloodiest clash in the history of the United States not only pitted the Union against the Confederate States of America – but also divided cities, states and even families. “The ugliness that occurred here, cousins killing cousins was a civil war in its truest sense of the term,” says Skowronek. “We had Latinos that couldn’t speak English fighting for both the Union and the Confederacy.” To add to the complexity of the situation, Franco-Austrian forces that supported the Confederacy suddenly invaded neighboring Mexico – which supported the Union under President Juarez. The result was a tug of war in the Rio Grande Valley area of four different forces battling against each other.

The full picture wouldn’t be complete without telling the story about what is happening in Mexico during that time. The trail also includes multiple entries on events and landmarks that took place on the other side of the border to create a better understanding of the political climate during that era.

The Valley’s last claim to fame in the story of the American Civil War is the fact that the final land battle of the war was fought on May 12-13, 1865 at Palmito Ranch, just outside of Brownsville. Few people realize how important the Rio Grande Valley was in the war and in United States history. Dr. Skowronek and the CHAPS Program team are pleased that the trail and its associated web page, podcasts, and trail guide will be completed before the sesquicentennial commemoration of the battle of Palmito Ranch that will take place this coming May of 2015. “We want to get this trail set so that people will learn that in addition to the battle, there are many other aspects relating to the Civil War era in the Rio Grande Valley,” says Skowronek. “We’re trying to get people intrigued with the rich history and legacy of the Lower Rio Grande Valley and have some place where school-aged children as well as college students can learn about their region. “