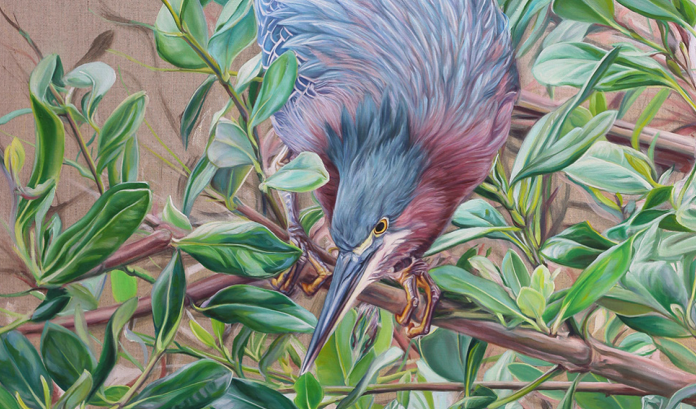 An exhibition inspired by nature fills the halls of the Performing Arts Center on the University of Texas Rio Grande Valley campus where Jessica Monroe, a contemporary local artist, showcases her oil paintings. Monroe’s exhibition, Sophia’s Song, begins in the UTRGV Performing Arts Complex in Edinburg.

It is a building that doesn’t transform itself very well into a gallery space with the patterned and colorful furniture, floor-to-ceiling windows in the narrow halls, and small wall spaces that can be a bit distracting. Nonetheless, Monroe’s artworks dramatically capture the attention of the viewer through emotionally and visually charged subjects.

The title “Sophia’s Song” is an ode to the artist’s belief that nature offers us “a window to Hagia Sophia,” or Divine Wisdom.

Monroe grew up visiting her grandparent’s ranch and cultivated a fascination with the natural world that is distinct in this region from a young age. She continued her exploration and enchantment with local natural subject matter, which paralleled her curiosity and respect for the environment into a career as a painter.

Nature’s imprint on the young Monroe was substantial and has proved to be long-lasting, as the wilds of the Valley continue to be the well that Monroe draws upon for artistic inspiration. Her practice emphasizes the dynamic conditions of nature, the South Texas Landscape, and the wildlife that surround her.

By reflecting on moments in her personal life, as well as inspirations directly experienced, Monroe creates her work. Some of the birds she includes in her paintings are endangered species that reflect man’s effect on nature.

“I am not creative; I don’t make any of this up,” she said during a tour of her exhibition.

From the origin of her work, connections can be drawn to the early landscape artist John Constable, whose goal was to paint nature in its raw state. Monroe hopes to transcend her love of nature through her art and provide more awareness about the declining habitats that suffer from overdevelopment and climate change in the delicate ecosystem of the RGV landscape.

Local viewers may find familiarity in her plant and animal subjects since they are migratory and native species to South Texas — such as the Groove-Billed Anis, Green Herons, and Roseate Spoonbills, along with cacti, milkweed, chile pepper, and cypress trees. Snail fans can rejoice, as Monroe also shares two shell-adorned gastropods for viewer’s appreciation.

A variety of surface materials are featured in her works, including, but not limited to, canvas, linen, and wood panels. On her wood panels, Monroe strategically paints to create a contrast between the wood grain that remains visible and the images she paints in the foreground.

The painted wood pieces follow a sepia color scheme that construct an interesting interplay between man-made materials fabricated from nature and the subjects she chooses to bring to life on them. Most of her work relies on her experiences of seeing flowers, birds, and cactus that can reflect the meaning of her culture and heritages in the life of the RGV. Her primary medium is oil painting, though she also utilizes acrylic on linen — both of which are employed to interpret abstract movement, such as the tall grass being blown by the winds.

Monroe’s painting style runs the gamut from tightly-rendered forms with no painted backgrounds, to compositions with loosely-abstracted elements represented both in the primary subject matter and the background. Her later paintings not only differ from her previous work based on the media in which they are painted on, but also in her reduction of detail in the overall composition.

Where her older works are mainly oil on canvas and feature intricate details, her newer pieces interact with the wood panel’s patterns. Her skillfully rendered use of color is softened into a wash, allowing the viewer to feel the energy radiating from the scenes she brings to life on canvas. As the viewer moves towards the other side of the Performing Arts Center, a different style emerges on the large canvases, and vibrantly painted plants are accompanied by small insects.

Leaves in various greens and blues with brilliant highlights call for attention against a natural bare canvas medium. The massive leaves and soft pastel-colored flowers hang in every direction with small bugs crawling about. In these works, one can see the interplay and relationship animals and insects have with their environment. This can be seen in one of her paintings from the unprimed canvas series where a close-up of a flowering Texas Milkweed and Monarch Butterfly Caterpillar are portrayed. The two species are painted in a way that shows their mutuality with each other and imparts on the viewer the sense that the two subjects become one dynamic interactive energy. The visible brush strokes and simplified shapes suggest nature’s freedom, fluidity, and interconnectedness.

The more technically-rendered paintings are not so linear and illusionistic that the life has been squeezed out of them. These paintings are nicely structured with details that are intriguing and well-presented. “Painted Bunting” is a fine representation of this approach in Monroe’s oeuvre. Her use of liberated brushwork and expressive color choices in her more interpretive paintings are quite engaging, as seen in the work “Snail in an Abstract World II” and “Cenizo in Blue”.

The paintings are visually realistic and true to nature. In particular, the paintings produced on linen are almost photographic. It is evident Monroe has a meticulous eye and has mastered the use and control of the paintbrush. While gazing at the paintings of wildlife filled with living insects and mammals, a sense of serenity fills the viewer.

Arguably the most intriguing piece in the collection was the “Observing Willet”. In this piece, she captures the jetties from the coast of South Texas, a familiar scene for locals, with waves of water flowing to a perimeter of rocks from the coastline and complete with a single bird gazing into the sea. Monroe’s treatment of the waves are fluid and alive, and they look as if they are moving. Monroe captures the soul of the sea as the light reflects off the waves and draws the viewer into that moment of time. The sound of the sea and water moving as it flows into the rocks can almost be heard. The cool air as the waves come into the shore can almost be felt, and the almost-smell of the sea is intoxicatingly nice.

As we move on to her later work, Monroe introduces bright and vibrant colors into some of her pieces and washed-out sepia tones into others. As the tour concluded, she ended on her latest piece: a sepia-toned pentaptych representing South Texas marshlands and a handful of Roseate Spoonbills. This piece may speak volumes about her evolution and introspection as a painter. These strikingly pink birds are muted with a limited color palette, bringing a quiet stillness to the viewer’s gaze. Perhaps it’s the tranquility of the painting, the opposition of the simple scene on the wall and that of the fabricated and modern furniture, windows, and walls in the immediate surrounding, or maybe it’s the lack of color and movement in the painting that brings questions about one’s inner experience in the presence of animals and their natural habitat. The pentaptych reflects the separation between individuals and their environment, one’s own negative environmental impact.

The exhibition showcases paintings that span most of her career, from some of her earliest works, to others that were just recently finished. There seems to be a clear distinction between the timeframes of the works. Earlier works are characterized by vibrant, lush landscapes that overtake the viewer in an impressionistic painting style, often showcasing an animal or two in the scene as a small part of a much larger system. Her later works take on a more focused approach and subdued palette, often depicting the landscape or plants and animals as equal parts in this system. Although this subject matter isn’t original or uncommon to artists here, her work brings a unique quality to it through her choice of color, canvas material, dimension, and subject-framing.

Monroe seamlessly connects her appreciation of the beauty of this landscape and its inhabitants to the viewer. In a way, her paintings are voyeuristic windows into her own witnessing and experience, as well as to a world that is both at our feet and so far removed from our daily lives in the ever-increasingly expansive RGV. Monroe’s work is a reminder that there is still so much of the natural world all around in spacious scenes and small details. One only needs to go outside and pay attention.

While much of the subject matter of Monroe’s exhibition brings to the spotlight local wildlife and habitat negatively impacted by habitat loss and the climate crisis, Monroe’s art is also hopeful. Her works leave the viewer with an appreciation for the beauty and importance of nature, while offering an opportunity for audiences to engage with art celebrating the RGV’s natural heritage.

By depicting the delicate nature of the local environment, Monroe said she hopes her art will help raise awareness, gratitude, and appreciation, as well as spur action for the protection and preservation of the remaining RGV habitat.