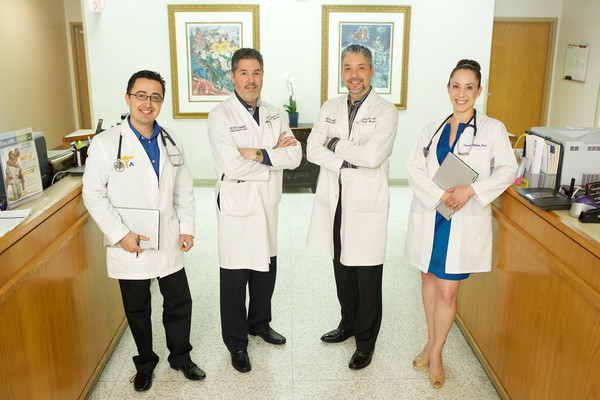 Most of us can think about our family and reminisce over the stories we’ve heard countless times from our parents and grandparents. Family history, knowledge and heirlooms passed down through generations end up finding us and molding us into the adults we become.

In McAllen, Texas, there’s a medical clinic that operates rather similarly. With over 65 years of service in the Rio Grande Valley, the Valley Medical Arts Clinic (VMAC) has brought a new meaning to the concept of a “family practice,” not only comprised of a family of doctors, but treating their patients as family, too.

“We get to see teenagers and their parents and grandparents,” says Dr. Samuel Ramirez, who partners with Dr. Joel Solis. Together, they currently lead VMAC. “Growing over the years with the population that sees you as one of their own is one of the neat things about family medicine.”

Dr. Ramirez and Dr. Solis have built a practice on the foundation established in 1951 by Dr. James Fitch. A graduate of Baylor Medical School, Fitch practiced medicine as a Navy doctor in the Korean War, where he was awarded the Bronze star. He returned home to the RGV to open his own medical practice with his partner, Dr. Dean Woolridge. Fitch and Wooldridge practiced for approximately 40 years before retiring and passing the clinic onto a new set of doctors in the early 80s. Dr. Jaime Rueda and Dr. John Worrell practiced together for approximately 30 years, retiring in September 2015. By that time, Dr. Solis and Dr. Ramirez had already been training and working with the practice for nearly 10 years. Today, their plans for the clinic’s continued growth and progress are deeply invested in the legacy left behind by the doctors who trained them.

“We want to stay true to providing quality of care and not focus on quantity. These doctors established a solid reputation for quality of care and academics,” says Dr. Solis. “We inherited 65 years of medicine — that’s a family that Fitch and Woolridge brought up. Our goal is to build our family around it and grow.  And we will grow with new ideas, with medicine, and with the medical school.”

Dr. Ramirez adds that they are always looking for ways to improve their practice. “We want to move the practice to the forefront of modern medicine and technology,” he says. “Networking from our clinic to the hospitals and the sharing of information is key.” He explains that unnecessary, repetitive testing is sometimes ordered in the medical field because of a lack of information. To avoid this, VMAC was one of the first practices more than fifteen years ago (before it was mandated) to make the switch to electronic records. “That was the first piece. We’re working to be integrated with the community to curtail costs and practice cost-effective medicine,” says Dr. Ramirez.

Dr. Solis and Dr. Ramirez are not just partners at the clinic; they have a close friendship that spans over 15 years. According to Dr. Ramirez, while he was attending UT Health Science Center School of Medicine-San Antonio, Dr. Solis was completing graduate work in San Antonio as well. It was Ramirez’s cousin, a mutual friend of theirs, who connected the two. “It was a fortuitous thing that we connected,” says Dr. Ramirez. Later, when Dr. Solis found himself contemplating where to move after completing his medical education at Rutgers New Jersey Medical School, Dr. Ramirez helped convince him to relocate to the Valley.

“I was told to come here because it was a place where I could evolve as a clinician,” said Solis. “It was a great place to see things that perhaps, in other parts of the country, we wouldn’t be able to see; we have a high rate of diabetes and a primarily underserved community.” He explains that while treating families continues to be VMAC’s focus, they have found another avenue by which to serve the RGV: research and education.

The two family physicians continue striving to teach and train their own and are focused on the incorporation of research within their Clinic. “Having research as part of your structure is pivotal because through research we learn how to better practice,” says Dr. Solis. “We’ve always been a hub; we’ve always been an extension of the local university in training mid-level care providers and training physicians.”

Dr. Ramirez explains that the purpose of starting residency programs is to grow their own population of young physicians who will hopefully stay in the region and provide healthcare to the community as aging physicians retire. Instead of recruiting from outside the RGV, VMAC wants to grow their own future leaders of the clinic.

“We want to continue to be an integrated part in the community in a variety of ways, from student mentoring to student rotating, to working with the medical school and the residency programs that are being established,” adds Dr. Ramirez.

VMAC serves as a precept, welcoming studying physician assistants, nurse practitioners, and medical students to practice approaching a patient and other bedside manners that aren’t learned first-hand from a textbook or in a lecture course. In addition, VMAC looks forward to working with the new School of Medicine opening under The University of Texas Rio Grande Valley.

“Having a medical school start in our community is something that most clinicians will never get to experience in their lifetime, and we have it in our backyard,” says Dr. Solis. “To be a part of that as a clinician is something magical and we can work alongside the medical school, continuing to help the community.”

Part of supporting their community requires recruiting physicians who share a passion for giving back. Physician Assistants Carmen Solis and Edgar Garcia joined VMAC within the last 10 years. Carmen Solis left her position with a local Planned Parenthood to join the practice nine years ago. And Garcia, who graduated from Nikki Rowe High School, went on to study at Stanford University as a Gates Millennium Scholar, but returned to the Valley, where he wanted to practice medicine.

Beyond their passion for the community, Carmen and Dr. Solis also found soulmates in each other and ended up married a few years after she joined the clinic. According to Carmen, she found a new family at VMAC, not only among her colleagues, but among her patients as well. “I think that as the medical world is changing, it’s losing that personal touch. You create these bonds and people start to trust you, and you end up knowing them for years,” she says. “There has to be a boundary in medicine, yes, but if you make it too rigid of a boundary, then you’ve lost being human.”

Dr. Solis and Dr. Ramirez are supported by an extended family of doctors who compliment the clinic with the skills and knowledge they bring to the table. These clinicians, who lend their time to VMAC on nights and weekends, include Belinda Jordan, MD, Beatriz Alvarez – Posada, FNP, and Melinda Rodriguez, DNP to name a few. The entire team at VMAC has a strong feeling of commitment towards the Valley, and Dr. Solis says he loves his community.
“The Valley is special; it’s not cliché. We have a community that is eager to evolve and we’re on the heels of that. We have a very smart, very diverse, very rich culture that is finding its way as one of the fastest growing regions in the country and with that, I think, we can make a difference,” says Dr. Solis.  “We’re looking at doing this together – as a family.”