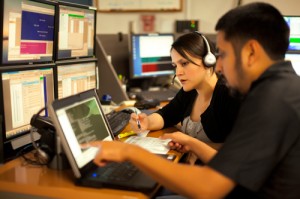 Valley Telephone Cooperative, Inc. (VTCI) has a rich 60 year history here in the Rio Grande Valley.  What began as a need to provide local telephone service to rural customers has literally evolved into an infrastructure that includes a vast broadband, long distance, transport, data, and video network, now known as VTX1, that spans from the Valley to south of San Antonio.  The latest technologies allow VTX1 to deliver top quality telephone, television, and Internet services right into eligible South Texas homes and businesses, all at affordable prices.

The modern desire to expand services to the cooperative’s member-owners produced two subsidiary companies, VTX Communications and VTX Telecom.  Their ultimate goal was to bring high speed broadband access to the Rio Grande Valley, giving members and customers alike the opportunity to stay connected to the Internet at home at speeds like those they have access to at work and other public locations.

Bandwidth, which represents both the available and the consumed data communication resources, is being expanded and increased through the deployment of the latest fiber technology.  While copper and wireless legacy connections are still viable, deploying fiber in rural Texas areas gives VTX1 the ability to move rural America ahead to be comparable to urban areas.  This means that VTX1 is more than laying the ground work; it is directional boring along miles and miles of South Texas roadways to place new fiber optic cable that will support high speed electronics in a network that will last for the next 40 years.

VTX1 has started from scratch to do what other companies considered too costly in order to meet the needs of rural customers.  John Bradford, Business Development Manager, planned for such an expansion for years and ultimately shelved the concept of delivering fiber optics throughout the Rio Grande Valley because of the high cost of construction.  However, in 2009, broadband funding became available under the American Reinvestment and Recovery Act (ARRA), and VTX1 was able to capitalize on two separate programs being offered.

Dave Osborn, Chief Executive Officer, is the individual who pursued the opportunity and the funding necessary to take advantage of these stimulus programs.

“These programs were very important to our future.  We needed to improve our financial model to include denser market areas to serve and achieve economies of scale to be secure in the long run,” stated Osborn.

In 2009, VTX1 received two awards: a Broadband Infrastructure Program Award for $78.6 million under the Rural Utilities Service (RUS), along with a Broadband Telecommunications Opportunities Program award for $22.4 million under the National Telecommunication Information Administration (NTIA).  NTIA expands broadband access and adoption in communities across the country with the objective to increase jobs, spur investments in technology and infrastructure, and provide long-term economic benefits.

The RUS award, granted under the US Department of Agriculture, was 51% loan and 49% grant, totaling $78.6 million.  The grant would not require repayment, while the remaining loan amount would require repayment.  This project represents middle-mile and fiber to the home (FTTH) construction that starts in Santa Rosa and goes all the way to San Antonio.  The towns included in this network are Santa Rosa, Sebastian, Lyford, Raymondville, Falfurrias, Premont, Agua Dulce, Orange Grove, George West, Three Rivers, Jourdanton, and Charlotte.  The services offered there will include traditional voice telephone service, high speed broadband Internet service, and television entertainment (IPTV) service.

The NTIA award, granted under the Department of Commerce, was somewhat different in that the $22.4 million was broken down into 70% grant and 30% cash contribution.  This project represents middle-mile construction that starts in Harlingen and goes all the way to Rio Grande City.  The towns included in this network are Harlingen, San Benito, Brownsville, Weslaco, Hidalgo, McAllen, Edinburg, and Rio Grande City.  The services offered there will include carrier transport services, broadband Internet service, and television entertainment service.

These broadband stimulus projects are significant for the Valley because they will not only bring high speed broadband Internet services to many unserved and underserved communities in rural South Texas, but they will ultimately produce jobs in our communities.  At this time, VTX1 is unsure how many jobs will be created, but they feel it is safe to say that the company employees may grow by as much as 20%, and the customer base may grow by as much as 400% when the networks are all up and running at full speed.

Broadband will also increase the ability of existing businesses and residential customers to take advantage of the same types of growth opportunities that exist in the major metropolitan areas.  New businesses are already relocating to the new fiber-served areas and list the availability of high speed broadband Internet and television services as one of the main reasons the area was selected.

“I see the broadband stimulus projects as a vehicle that will allow VTX1 to transition from a conventional telephone company into a company that will expand and grow well into the future.  My job is to ensure our company and its employees are going to be able to do more than survive as technology changes and customer demands increase in the coming years,” affirms Lew Brownfield, Chief Operating Officer.

VTX1 strives to be the best in the industry in terms of quality and value.  Its investment in the sprawling infrastructure that makes up the  broadband network is a true investment in the advancement of communication and technology in the Valley community.  When you join with VTX1, you are jumping on the bandwagon for advancing communication here in the Rio Grande Valley.

For more information regarding the services offered by or member eligibility requirements of VTX1, visit the website at www.VTX1.net, call 1-800-446-2031, or stop in the office, which is located at 480 South 6th Street in Raymondville.