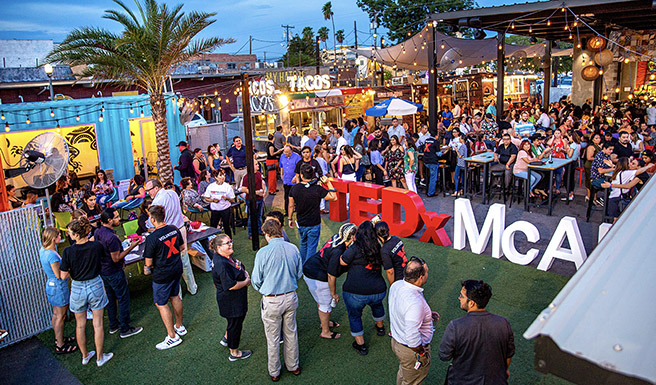 Out of many words written on sticky notes across a white board, one stood out to the group: Dreamers.

Aside from the now-automatic political connotation, for this group of educators, community organizers, and professionals from the Rio Grande Valley, the word had different meanings.

From the dream their ancestors had when they arrived to the region to their own dream of getting to where they are or where they are heading, it was the word they were looking for to encompass the experience of many of their colleagues, families, and friends.

This was part of the planning to get to this year’s TEDx McAllen event on Nov. 12, where 15 nominated speakers who have contributed to the Valley’s colorful tapestry will share the stories to a selected audience — and ultimately, to the world.

The theme, “We Are Dreamers,” came from the idea that in this region, everyone is familiar with  the pursuit of a dream.

“We are using the word in a very broad way,” said Marcos Silva, the lead organizer for this event. “We are thinking that you have reimagined something that was not there and you are working towards that.”

The talk is the second independently organized McAllen event and part of TED — the nonprofit media organization that hosts talks under the slogan “Ideas Worth Sharing.”

In this case, Silva, an educator and counselor who works for IDEA Public Schools, submitted his application early in the year after attending a TED event for educators. About three months later, he was approved and hit the ground running with all the planning necessary.

“Since the onset we knew that this was a community-organized event,” Silva said. “So what we did is that we launched a public application to be part of the committee. People shared it and we got a good group of people who applied.”

There are 15 people who agreed to be involved, and the group ranged from those who were both familiar and unfamiliar with the event but wanted to share their knowledge.

It’s not the first time Silva gets himself into such planning. For the last two years, he and his students have held their own student-focused, Valley-proud and nationally recognized event called South Texas Ideas Festival — where high school students get to hear the stories behind the ideas of local entrepreneurs, community organizers, and others.

This time, the goal is to open the stage to those who wanted to share what makes the dreams of the region so unique and important.

The community was invited to nominate speakers. There were 215 speakers nominated and they were all invited to apply for one of the 15 spots. About 80 nominees actually went through with the application and the committee then selected the final 15.

The group consists of a wide array of backgrounds: the charity of Sister Norma Pimentel, the advocacy of Leo Benavides, the space exploration of Michael Fossum, and many more.

“Even though I usually talk engineering, I think that for this particular talk, it might be something more personal,” speaker Karen Lozano said. “I think it’s just a great topic because in reality, everything starts with a dream and an idea.” 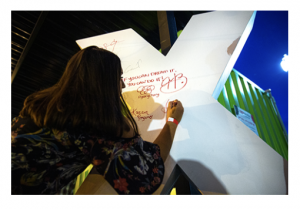 Lozano, a mechanical engineering professor at UTRGV recognized for her work and research on nanofiber technology and production, has conducted many talks on her expertise. But this time, she said, her message is not focused solely on those with an interest in science.

Lozano recalls the exact moment she told her mother, “I want to be a scientist.” She was in fourth grade and living in Mexico, she recalls, and at the time there was no precedent for a women in science.

The talk will also be somewhat new to speaker Alex Macias, CEO of GrainChain, a platform that aims to facilitate secure transactions between farmers, suppliers, and buyers.

Macias has given talks around the world about the importance of sustainability in agriculture as a necessary food supply, and the role of technology in streamlining processes to ensure fair and secure transactions to all the parties involved.

But this will also be the first in a stage where a broader audience will get to hear the message from his personal perspective and the dream behind his venture.

“This was the first opportunity that I’ve gotten to not have to speak about individual products, but more about our social goal,” Macias said. “I am very proud of where I come from and what I’m doing, so I think that if I can inspire one kid to push that boundary to do a little more, it’s worth every minute of being on that stage.”

The speakers worked to finetune their message with the help of the planning committee and both Lozano and Macias said they were very excited to hear what everyone has to share.

On his part, Silva is already thinking of the next event. He said the best part has been being exposed to all the talent and ideas that the region has to offer. The worst part is not being able to choose everyone.

Weeks before this year’s event, the team was working to narrow down the more than 400 applications to be in the audience to the 100 spots available. If he gets approved for another, Silva hopes to make it into a bigger event knowing there was plenty of interest to participate and attend.

The challenge this year has been getting the community itself and even the city to financially support the event. So the hope is that after seeing their own people volunteer their time to share all that’s good with the region, more people will buy in and offer their support, too, to grow the platform.

And while there is the overarching TED theme of sharing inspirational ideas, Silva said as an organizer, he has gotten a different expectation for this event.

“I think for me the bigger (expectation) is that we do a good job at really showcasing the true essence of the people in our community and to be on a platform that is equal to the rest of the world. I think that’s something our community needs and deserves,” Silva said.