The system is working.  So why is the organization pushing harder than ever to increase student transition into the workforce?  Well, it’s a matter of timing, according to longtime Executive Director Pat Bubb.  Education-focused employers are now relishing a more meaningful role in education than just giving money.  Instead, businessmen and women are playing an active role when it comes to mentoring and guiding future leaders in the Rio Grande Valley.

For more than four years now, as a regular fixture at career days and speaking events across the Valley, Chronis says he has been inspired to help students, as well as encourage them to take advantage of new and exciting opportunities taking place here.

As a young project manager for McAllen-based ERO Architects, ensuring that small and large projects get built as planned, Chronis says he looks forward to increasing student interest in engineering, architecture, and construction.  Through his work with RGV Mentors and South Texas College’s Project Hire, Chronis says he takes a

direct approach to his work as a mentor, volunteering his time with students.

“I previously had the opportunity to mentor a student who had in interest in architecture, and on a monthly basis he would come to the ERO offices and spend half a day with me and my colleagues,” Chronis said.  “At his commencement, he said the time he spent with me changed his life.”

“When he said that, that touched me, because it opened my eyes to understanding how much of an impact I can make just by explaining my path, and especially about what is out there,” Chronis said.

A 1998 graduate of Pace High School in Brownsville, Chronis attended Texas State Technical College and obtained an Associates Degree in Computer Drafting and Design in 2000.  Growing up in a “house of educators,” he says some of his fondest memories included watching his father, who by that time had been teaching drafting for over 30 years, draw up floor plans by hand.

When he was introduced to Tech Prep in high school, he was exposed to at least two years of drafting before he entered college, which would then influence his degree and career choice.

“RGV LEAD’s importance is to offer students awareness of the opportunities that are there for them after high school,” Chronis said.  “I was introduced to RGV LEAD, which was formerly called Tech Prep, when it was a new program.”

“It gave me the opportunity to start taking drafting classes,” he said.  “I just realized I wanted to do something in building trades, whether it was architecture, engineering, or construction management.”

He interned with San Antonio firm Kell Munoz Architects while completing his Bachelor of Science Degree in Architecture from the University of Texas San Antonio, and eventually found employment at ERO, where he has worked for the last six years.  He was awarded the RGV LEAD All-Star Award earlier this year, along with state Sen. Eddie Lucio Jr. and TSTC President Cesar Maldonado. 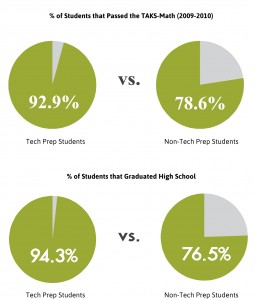 In addition to his position on the RGV LEAD Board of Directors, he currently sits on four different advisory boards, including the Advisory Committee on TSTC’s Drafting Program, and advisory committees for the Career and Technology Program at Los Fresnos, Mercedes, and Brownsville School Districts.

“The advantage of having mentors outside of the household is very important,” Chronis said.  “I credit a lot of my success to these mentors guiding me along the way and talking to me about the path they took.  What RGV LEAD did for me was open the doors.”

RGV LEAD is the name for a regional non-profit, community-based organization involved in the “business of education” since 1992.  The organization essentially finds itself as a middle ground between educators, community leaders, and worker-hungry employers, and it works on behalf of these entities to establish partnerships.

The mission is to engage kids in college-and-career focused learning opportunities in order to deliver sharp and capable students into the workforce, according to Executive Director Patricia Bubb.

“We are a regional collaborative effort that belongs to nobody and everybody at the same time,” Bubb said.  “RGV LEAD’s work complements the work done by school districts and colleges.  We are doing things they do not do, while at the same time giving employers a more meaningful role in education that just giving money.”

Numbers provided by the Texas Education Agency and Texas Higher Education Coordinating Board indicate that the system is effective.  Performance in the Texas Assessment of Knowledge and Skills (TAKS) exam during the 2009-2010 school year found that 92.9 percent of Tech Prep students met the test standard in mathematics compared to their non-Tech Prep counterparts (78.6 percent).

During the 2009-2010 school year, 75.5 percent of Tech Prep students transitioned to college the fall after graduation, according to TEA.

“What we have seen with the data available is that Tech Prep kids in the Valley have outperformed everybody else, that’s the bottom line,” Bubb said.  “In my mind, I think it’s because our programs encourage kids to set college and career goals together.

“It’s my personal opinion that when a youngster finds a career connection, your job becomes to help a student connect life at school to life after school,” she said.  “For example, it amounts to explaining to them that ‘you need to do well in this Algebra class, not just because there will be a test on Friday, but because you said you wanted to be a pilot.’  Let us relate what you are doing now to life as a pilot.  That’s why it’s important.”

Where Education and Business Converge

Through the work of RGV LEAD, leaders from business, industry, public schools, higher education, and the community have come together to build a college-going, career-ready culture designed to help students, families, and regions experience economic success.

RGV LEAD and its 51-member board of directors comprised of businesspeople, community leaders, and educators have combined to fund crucial elements of its regional system.

These components include creating an annual regional labor market report that identifies industries and occupations with the greatest potential for jobs in the region.  It also includes developing programs of study that are connected to the occupations outlined in its annual report.

RGV LEAD and its board also works diligently to create advisement and counseling to help prepare students for college, and especially helping them make smart decisions about creating a college transcript while they are still in college.

“It reminds me of something that I like to explain to kids as a mentor,” Chronis said.  “It’s the importance of setting goals for yourself, and the importance of having those dreams and goals.  It’s understanding that when you meet goals, you have to set more goals,” he said.  “The end of the road is not when you meet those goals; it’s always having those goals you are striving to reach.”

According to an internal publication of the University of Phoenix, five fields in particular: healthcare, information technology (IT), retail/sales, education, and criminal justice are expected to help improve the hiring climate.  Citing a University of Michigan Center for Labor Market Research report, job growth should average 180,000 new jobs a month in 2013, a 15 percent increase over 2012 monthly hiring.

One out of every six jobs created in 2012 was in the healthcare field, and the trend will continue in part to the aging of the population and the Affordable Care Act, according to the Michigan report.

Retail/sales is expected to grow and create nearly 4 million jobs, according to University Phoenix research.  Criminal justice is expected to see an increase in more parole and probation officers, according to UP.  Education is also slated to increase due to a spike in interest at the federal level, an influx of immigrants, and the desire for mid-career professionals to keep their skills sharp.

The future of RGV LEAD

After more than 20 years at Tech Prep, Bubb says she is retiring in the fall to pursue her passion for writing and travel.

As a leader who has pledged above all to forge a partnership among workforce, education, economic development, and industry partners in the Texas Rio Grande Valley bordering Mexico, Bubb says her successor will have to manage a delicate balance between all the stakeholders involved.

“At one time, there were 26 Tech Prep consortiums in Texas, and now there are only a couple left,” Bubb said.  “They were funded with federal money, and the federal funding was eliminated in 2011.

“This one is here because school districts have helped fund it,” she said.  “Employers believe in what we’re doing.  I have come to well understand the world of the public educator in terms of counseling and career technical education, but what is unique is the fact that I came into education from a business background.

Prior to her work with TSTC, Bubb was a legal assistant to Forrest L. (Champ) Jones and Robert R. Williams at Smith, McIlheran, Lauderdale & Jones law firm in Weslaco from January 1976 to August 1981.

Her career in the law field also included secretarial and legal assistant duties to Scott Bradley at two Dallas law firms and legal work for A. L. Rhodes in Abilene.

“In the Valley, people really care.  I surely do,” Bubb said.  “The role businesspeople play in helping educators understand what employers are saying when people come to ask for jobs, and the role they can play in helping kids identify what they would like to do with their lives is invaluable.”