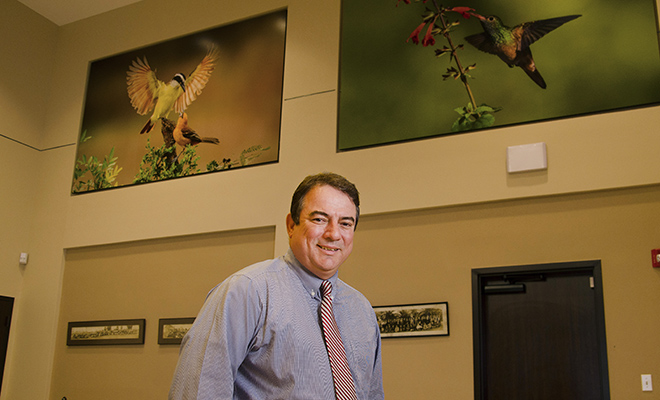 Nestled smack in the middle of the Valley — in the center of the Mid-Valley to be even more precise — the city has boomed in economy and retail over the years. A decade ago, who would have envisioned a Starbuck’s, Chick-Fil-A, Chili’s and such big box stores making their home here? Sure, Carl’s grocery store is gone, but so much more additions have been made to Weslaco.

The historic Villa De Cortez has had a makeover, and the downtown area of the city is looking at a potential facelift. All-in-all Weslaco seems to be on the verge of an economical bonanza. And the guy charged to make sure the roundup goes well is Economic Development Corporation of Weslaco Executive Director Joey Trevino.

“It wasn’t a childhood dream of mine, but it was just gradual,” he said about being involved in the Weslaco EDC. “I always said it was easier to tear things down than to build them up. That’s what excited me.”

This isn’t Trevino’s first go-round in Weslaco. He interned with the city right out of college before moving on to Florida for two years. After that stint he returned to the Valley, working for the University of Texas-Brownsville before seeing another opportunity in Weslaco again.

“I did the three months here, I left for a while and when I lost my job over there I came home and started working for UTB,” he said. “Then I got an opportunity to come back (to Weslaco) after two and a half years.”

Trevino was hired as a city planner, but then his career jumped up to planning director.

“It was an opportunity for growth,” Trevino said. “In that time there was a lot of residential subdivisions here in Weslaco. I think I counted two or three thousand residential plots.

“I attribute it, Weslaco in my mind, to being center of the Valley, and the center of the Mid-Valley. Being the main focus in the central Valley, Weslaco has had a really strong health care community with Knapp Medical Center, South Texas College, IDEA Public Schools. It’s become a hub.”

The old downtown strip on Texas is also getting some work done, although they may look just fine the way they are now.

“In addition the stores downtown are very popular and are the nicest (looking) in the Valley,” Trevino said. “There was the remodeling of the Cortez Hotel. The owners took an aggressive stance to redevelop the area. Subsequently they redesigned it.”

“I’ve been here six months, and in those six months when I first started, (my goal) was to bring the community together and start a strategic plan for economic development. I’ve already had a head start on that. I’ve got some priorities, and what we’re going to do now as far as those priorities.”