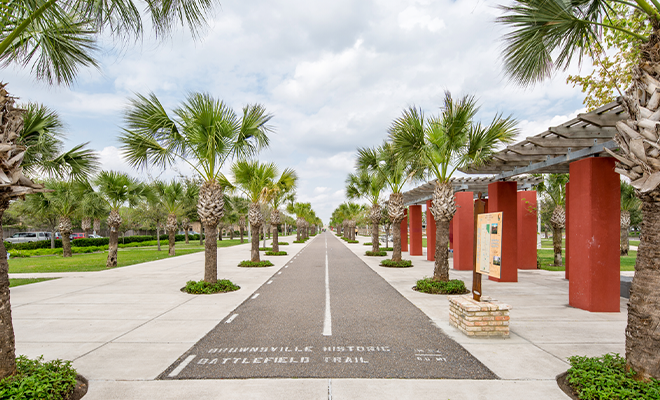 Nearly two decades ago, Jim Darling’s doctor told him that he needed to get more exercise for his heart.

“So about 18 years ago, I got on a bike, and I’ve been riding ever since,” the McAllen mayor said. “It’s a great way to see everything. I go explore. If I have zoning issues come up for the city, I get on my bike and ride out there. It’s a great way to look around and actively observe things.”

Darling says he frequents McAllen’s Second Street Hike & Bike Trail — and that he’s pedaled all the way to Port Isabel.

“It’s the most fun you can have seeing your area,” he said. “It’s a great way to see all the great things in the Valley and it’s a fun way of doing it.”

Darling isn’t the only leader in the Rio Grande Valley who recognizes the power and potential of bicycling in this region.

That’s why Valley tourism app and website Explore RGV has released its second curated Adventure Guide with a focus on bicycling.

“The great thing about the Bicycling Adventure Guide is that anybody — from a very beginner bicyclist to somebody that is an expert in bicycling — they can find the resource that best meets their need,” Garza said. The LRGVDC created the Explore RGV initiative.

“The Rio Grande Valley has a lot of hike and bike trails and other resources to use for bicycling. It’s a great place to bicycle,” Garza said. “The cool thing about it is our city leadership really understand the value of those quality of life projects. There’s more and more investment occurring in more bike trails across the communities.” 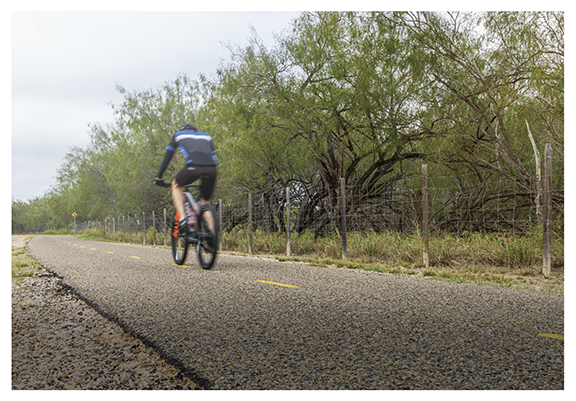 Dr. Rose Gowen, physician and Brownsville city commissioner, has been one of many leaders instrumental in boosting access to bicycling in the RGV. She became involved in initiatives to help make Brownsville healthier, including restarting the Brownsville Farmers Market and instituting a springtime weight-loss challenge.

“We also looked at the built environment in terms of what did our built environment need to encourage people to be more active in their daily lives?” she said. “That included looking at bicycle riding in addition to walking. We started looking at, is it safe to ride a bike? That led us to find a lot of gaps in our infrastructure for safe bicycle riding in Brownsville.”

Using money earned from the city’s plastic bag ban, in 2012, Gowen and other city leaders funded a master hike and bike trail that brings a safe route within one-half mile of every home in Brownsville. In 2014, Brownsville and surrounding cities attended an active transportation conference on bicycle tourism that led to the funding of the Caracara Trail, a network of routes that connects 11 cities in Cameron County. This project paved the way for both economic growth in the form of more bicycle shops as well as increased health. For the first time in 10 years, the rate of diabetes cases in the area has started to drop, Gowen says.

“Together, with a lot of really passionate people, we worked hard to develop the arguments, the logic, the connections between a simple bicycle and economic development or increased tourism or health or improved educational levels because many people see a bicycle as a toy, but quite honestly, a bicycle can be a tool — and that’s how we’re using it in Brownsville and in many cities in Cameron County,” she said.

That two-wheeled tool can galvanize both the health of the Rio Grande Valley and its economy. Often, the two are intertwined, Gowen says.

“What does influence our choices for lifestyle and health are who do we live with, where do we live, what does our city government provide for us?” she said.

Bicycling tourism has the potential to infuse millions of dollars into the RGV economy thanks to active tourists who frequent local businesses, Gowen adds.

“It means more money into the cities of the Valley and it also means more money to feed into better infrastructure for bicycling and walking and jogging,” she said. “The additional benefit is it’s the same tool that can be used to get our own people off the couch. It’s a win-win situation. It helps our own people, it helps outside new income.

“We’ve never been a destination nationwide or internationally for active tourism. This guide and these initiatives are all aiming to establish that.”

Cycling enthusiasts can enjoy the Bicycling Adventure Guide’s resources in several different ways. All 41 listings picked for inclusion can be downloaded for easy reference on a double-sided PDF. On the back side of the listings, cyclists can reference a series of safety tips to follow while riding.

The digital Bicycling Adventure Guide maps out the 41 sites and includes links to additional biking references, including:

> TrailLink, a Rails-to-Trails Conservancy initiative that connects people with trails

“We really think this is a Valley initiative — not just one city or another,” Darling said. “The Rio Grande Valley’s a fantastic place. We’ve been trying to get the cities to think regionalism and this is a fantastic way of doing it — by something that’s going to be fun and healthy for our citizens.”

Explore RGV’s first Adventure Guide highlighted choice birding locations across the region. People can expect the third guide out early this year — and subsequent guides released about every quarter.

“These have been so much fun to put together. They’re a challenge making sure we don’t forget any of the top resources,” Garza said. “We want to make sure we promote all our great, beautiful assets across the Valley. Some of those have zero cost, which is exciting.”

Where is your favorite place to bike? #JoinTheConversation at facebook.com/rgvisionmagazine.