It’s that time of the year again! It’s the day when asking strangers for candy and dressing up as ghosts isn’t odd. It’s Halloween for Americans.

How exactly did this become a tradition for one particular day out of an entire year? All the “spooky” to an American Halloween has its historical roots in the ancient celtic territories.

Samhain  (Celtic for Halloween) marked the end of a good harvest, and the time for the spirits of deceased loved ones to return home and celebrate. Food and drinks were left for the spirits along with candles to light their way home.

Do the jack-o-lanterns and offering of candy sound familiar?

As Christianity spread to the Celtic territories in 800 A.D, it intended to create a holier holiday to honor saints. Therefore, Samhain was was renamed All Saints Day. All Saints Day became All Hallows, then All Hallows Eve, and eventually shortened into Halloween.

Present day Halloween resulted from the combination of different holidays across several regions by immigrants coming into America. 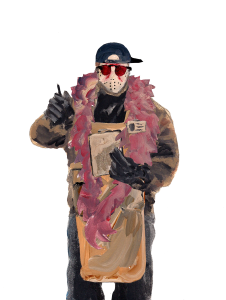 America is big on Halloween and the spending says it all as it is the leading commercial holiday behind Christmas.

It’s not thousands or millions that are spent annually, but billions. According to the National Retail Federation Consumer Spending Survey, data estimated 7.4 billion would be spent on preparations for Halloween in 2014. On average, Americans have spent 6 billion per year for the past eight years.

Halloween is the day to escape reality and be absolutely anybody or anything. Adults buy costumes for themselves,  their children, and even their pets. Children dress up as their favorite superhero or princess, trick or treat at night, and eat as much candy as they can possibly grasp.

Across the Rio Grande Valley, city officials partake in hosting Halloween festivities to bring the community together in a night of fun for all ages.

As trick-or-treating is the typical way families will spend the night, the city of McAllen has a partnership with the Fire and Police Department to provide a safe way to celebrate Halloween. Along with the Parks and Recreation department, McAllen hosts a Halloween festival at the Municipal Park and Pool.

According to Leslie Howland, McAllen marketing and events coordinator, these festivities ensure children are kept off the streets while providing fun for the entire family.

At this festival, little ones can have a ride through a haunted pool, or a walk through a haunted house. With games to play and costume contests, parents do not have to worry about accidents on the streets. If trick-or-treating is on the to-do list, the fire and police department is there to educate children on how to proceed with safety.

According to Howland, last year’s festival brought in 4,000 people throughout the night.

Most Halloween celebrations in the Valley will even lead into Dia de los Muertos festivities.

The turnout the city of McAllen has received over the past years has made the preparations a success. It takes a team to make these events happen, but there is also fun in store for staff members.

“We get to see the amount of time people put into costumes and how unique they get is always interesting to see,” Howland said.

Whether they go to festivals or trick-or-treat at neighborhoods, Americans will definitely find a way to have fun on October 31st and be who they want to be for a day.