Prior to opening their iconic entertainment establishment, Dave and Buster, two entrepreneurs, had opened separate businesses just a few doors down from each other; Buster had a restaurant and Dave had opened a place of entertainment and games. It did not take long for the two young men to notice that their patrons were rotating between the establishments and the idea was formed — why not put them both under the same roof? The first Dave & Buster’s location opened its doors in Dallas in 1982 in a 40,000-square-foot warehouse.

Now, nearly 35 years later, Dave & Buster’s has opened their 100th location here in the Rio Grande Valley. The very first South Texas location is located at the Shops at 29, on the corner of Expressway 83 and 29th Street. With over 30,000 square feet of entertainment space, Dave & Busters “is unlike anything McAllen has seen before,” said the spokesman for the chain. “The new McAllen location comes as part of the city’s strategic economic planning, and is solidifying McAllen as the RGV’s entertainment hub.” 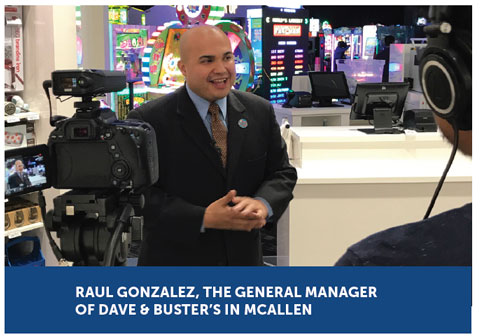 Dave & Buster’s is one of many entertainment and dining facilities recently established within the city of McAllen. Diversifying development is an integral part of McAllen’s strategic plan. More than $100 million in new restaurants, hotels, and stores have opened their doors on McAllen’s west side as the city expands its commercial and retail presence around the Convention Center corridor. In an article published by the McAllen Public Information Office in April 2016, McAllen Mayor Jim Darling stated that “adding signature venues like Dave & Buster’s has been a longtime strategic goal for the city and not only will grow the retail base, but serve international visitors using the Anzalduas Bridge and McAllen-Hidalgo crossing.”

Dave & Buster’s in McAllen provides innovative food and beverage selections, ultimate sports-viewing, and a one-of-a-kind gaming experience with 160 of the latest and greatest arcade games. The company has nearly 100 locations across the United States and the closest one to the Rio Grande Valley prior to the opening of the McAllen location was in San Antonio. “The fact that there was not one in the Rio Grande Valley was an important factor for us,” City Manager Roel “Roy” Rodriguez said to the McAllen Public Information Office in April 2016. “It’s a huge win for the citizens of McAllen but also for the entire region because people will travel to go to a Dave & Buster’s.”

Dave & Buster’s is providing over 280 full-time and part-time positions for both front-of-house and back-of-house capacities. These jobs include cooks, managers, bartenders, waiters, game techs, hosts, and more. In addition, they offer benefits including medical, dental vision and 401k for many of their positions. Other perks include Dave & Buster’s High Potential Program that enables high-performing employees to move quickly into new positions. Over 30 percent of the brand’s current management was promoted from within the company through this program.

“Like any large operation, we depend on having great people move us forward with excellent service and smiles second to none,” said Raul Gonzalez, the general manager of Dave & Buster’s in McAllen. “We will reward our people with great pay, in an environment that is fun and open for advancement throughout Dave & Buster’s soon-to-be 100 locations. In short, the Rio Grande Valley is our home, and we plan to champion our home to anyone that we have the pleasure of meeting.”