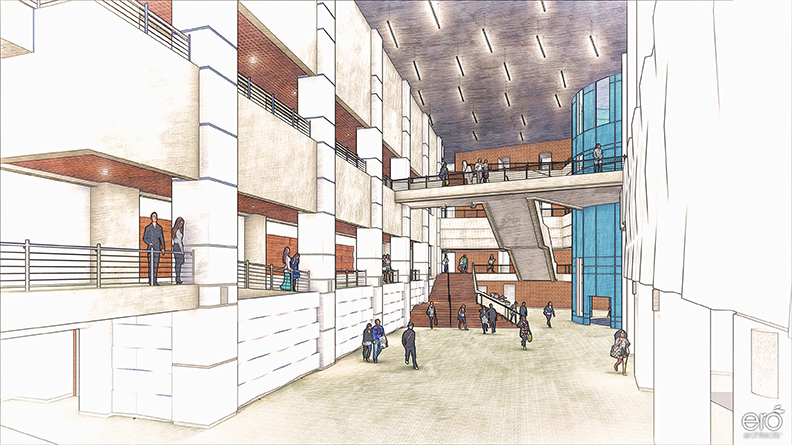 More than one year out from its grand opening, excitement continues to mount as the world-class McAllen Performing Arts Center (MPAC) takes shape.

The 1,820 seat facility has been under construction on the southeast side of the McAllen Convention Center grounds, next to the Veterans War Memorial of Texas, since August 2014. Roughly 50 percent of the Center has been completed and remains on pace for its official opening in the fall of 2016.

The Civic Center auditorium, built in 1960, has served the community as a performing arts venue for many years. But City officials realized it now lacks the technical capabilities and space requirements needed for “A-list” Broadway shows, such as Wicked or Lion King, or the large Mexican and Latin American theatrical productions.

“With the new McAllen Performing Arts Center, we will be able to bring ‘A-list” shows touring across the United States and Northern Mexico that hadn’t previously been able to visit our area,” says Omar Rodriguez, Director of the City of McAllen Convention Facilities Department.

But area residents can expect to enjoy much more than Broadway shows and touring Latin theatre productions at the new Center. MPAC plans to host a wide variety of events, including symphony, dance, family shows, theatre, popular music such as rock, pop, Latin and country, comedy, and local events such as recitals, graduations, and local theatre.

“These are the types of events people are anticipating and waiting for, that will enrich our culture here in McAllen, and that people will go to,” says Yajaira Flores, the Convention Center’s Manager of Sales & Event Services.

It is the city’s vision that MPAC will become an elite performing arts facility that rivals those venues found in larger cities, while also meeting the needs of the local community.

“We envision it as an inspirational, creative place where people will love to be and love to work,” says Flores.

The city currently attracts just over 170 shows annually, which are held at the Convention Center’s exhibit halls and the Civic Center auditorium. In contrast, the new MPAC is expected to draw more than 200 shows annually.

“It’s important to note that in addition to all the events we attract from outside our city, the MPAC will continue to cater to our local events, dance recitals, and graduations. It’s something we’ve done the past 60 years and something very meaningful to our community. For instance, being able to have that stage for a recital means a lot to a young boy or girl who wants to make it into the arts when they’re older,” Flores remarks.

Flores believes MPAC will become the pride of McAllen and surrounding area, a shining beacon of outstanding entertainment.

“We are completely redefining the experience of going to an event. There will be no better place in the entire Valley to see and hear a live performance,” she adds.

MPAC will be loaded with technological magic – including state-of-the-art adjustable acoustics, audio, lighting, and stage support. The acoustics package, for instance, will feature a robust acoustical shell with celestial ceiling that can be lowered to accommodate music and symphonic events. It also will include an adjustable acoustic drapery – ideal for orchestra, the spoken word, and amplified settings.

The audience will enjoy sitting in comfortable, fully padded seats with armrests and unobstructed views of the stage. They’ll have their choice of three levels of seating – the main level, the first balcony level, and the upper balcony – all meeting Americans with Disabilities Act standards.

“Within those 100 feet, there will be a lot of technical equipment, acoustic paneling, and the like. Productions will be able to hang all of their props out of the line of sight so they can bring them down when they change scenes for theatrical performances,” notes Flores.

Voters in 2013 approved the issuance of $15 million in bonds for the Center’s construction. The remaining funds are coming from the city as well as a portion of the hotel/motel tax.

“We believe the MPAC will dramatically enhance our quality of life and offer new opportunities for cultural enrichment,” says Flores.

“It also will enable us to raise the caliber of arts education throughout the Valley, and in so doing stimulate the creative energy of our citizens, especially our children.