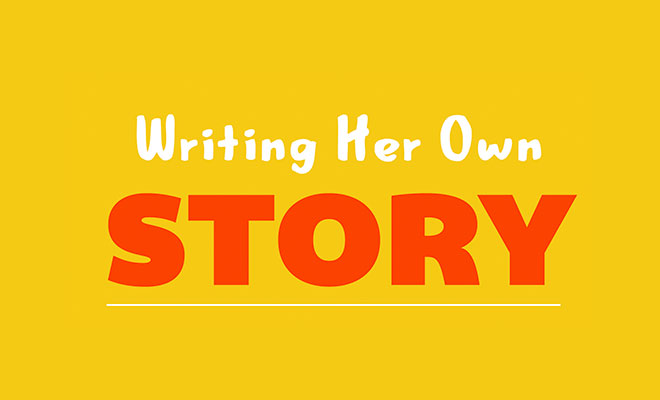 Before she knew how to read, Arielle Adriana Garza scrawled scribbles over the blank pages of a notebook, already aiming at a future full of writing. Her mother, Alison Balderas, saved that journal and others Arielle steadily filled with longer words and sentences — a testament of what was to come.

In 2013, at 8 years old and with the support of her family, Arielle became a published author with the picture book “A Castle for Me.”

“I was extremely proud of her,” said Omar Balderas, her father. “She always likes to write, so for the ideas to come out of her little head and onto paper, then finally it became a reality.”

“It’s not that hard when your grandpa, grandma, tía and tío are all authors, too,” she said before remembering that her uncle is an illustrator — and perhaps an inspiration for some of her own artistic abilities. In addition to writing the story, Arielle drew and colored all of the illustrations.

“It’s about a girl and her brother having a fun day in their castle,” Arielle said of her book. The 20 pages, including the front and back covers, detail activities like playing inside and outside, breakfast and dinner, and a movie night. The book comes in three different sizes, as well as English, Spanish, and bilingual versions. Copies can be purchased online through the publisher’s website, www.fbgenterprises.com, or at the Palms Crossing Barnes & Noble location in McAllen.

For Arielle, the writing process was swift. She developed the book from a shorter story she had previously wrote, making some changes to the narrative along the way.

“It was easy,” she said. “It only took me two days.” And the publishing process, by comparison? “It took them months.”

After the book was published, Arielle attended readings at the University of Texas Rio Grande Valley, the Early Childhood Conference on South Padre Island, and a Hispanic heritage event in San Antonio. Omar recalled other attendees being impressed with his daughter’s achievement.

“As a parent, for me, I feel a sense of pride when you have other authors who have been doing this for years and they come up to her and say congratulations,” he said, adding that her age surprised the authors. “They even say that’s why they started writing — to be able to influence children just like Arielle to go ahead and be able to fulfill their dreams.”

Back at home, Arielle remained discreet about her published work.

“I only told my friends at my old school,” she said. “None of the people at my new school know except the principal. She likes it.”

Arielle won’t stop at just one book. She’s gearing up to write an entire series based on a game she and her brother, Omar Balderas Jr., used to play.

“It’s called ‘Fairy Girl and Dino Boy,’” she explained. “I’ve been writing the first book for about a month. It’s a lot bigger and I’m using harder sentences — compound and complex.

“They save the day, like superheroes.” With this new project comes more complicated situations for Arielle to navigate. “ I had to get special permission to use Dino Boy in the book since (my brother) created him.”

“They have contracts,” Alison interjected, laughing. “They both wrote out contracts.”

At this point, Omar Jr. wants to be “a very famous scientist,” Alison said. No matter what paths their children choose, Omar said he and Alison support them.

“All we’ve ever done with both of them is try to encourage them to do everything that they put their minds to and let them know that there’s nothing in this world they can’t accomplish,” he said.

Alison looks forward to what that future holds for Arielle.

“It’s an exciting adventure that we get to go on with her and know that she wants to continue,” Alison said. “It wasn’t, ‘let me write it and I’m done,’ it’s ‘what can I do more, how am I going to create more?’ Now she wants to do a series — from one book to a series — and it’s her blossoming into …”

“The creative artist that she is,” Omar finished.

“It’s just easy to me,” Arielle quickly added. “I go read, and I write books, and I get to have fun.”

“That’s all she does, is read,” Alison agreed, mentioning the Harry Potter series Arielle is currently plowing through.

Arielle has some advice for children her age who might be considering publishing stories of their own. “Write what makes you happy,” she said.

And as for what she wants to be when she grows up?

She smiled. “Well, I’m already what I wanted to be.”

Learn more about “A Castle for Me” by visiting www.fbgenterprises.com/a-castle-for-me.html.